I’ve heard good things about this book series from several of the people on the old school wrestling podcasts I listen to regularly.

That being said, I really wanted to check this one out first, as I’m a massive fan of old school tag team wrestling because it’s an art that seems lost in the modern era and because so many of the legendary tag teams were just too cool for f’n school.

This does a great job of providing mini-biographies on the greatest teams the sport of wrestling has ever seen up to the early ’00s. It covers all the different eras going back to the beginning of tag team wrestling.

The book is well organized, well researched and it discusses the teams and the wrestling stars with great care.

All in all, this was a thoroughly enjoyable read and I especially liked it because I don’t think tag teams get enough love.

Rating: 8/10
Pairs well with: other books from this series, as well as other historical wrestling books.

This is a box set of five different DVD releases by VCI Video from 2001. I believe this is the full set of the DVDs that they put out. You can still get this on Amazon but I bought mine off of Jim Cornette’s website, as he still has some and he’ll actually sign them for you.

The five DVDs are all co-hosted by Jim Cornette and Dave Meltzer, as they give their two cents on each of the dozens of matches presented, providing historical context and a lot of the behind the scenes stories that led to certain matches.

Most of the original commentary tracks from these various matches are still there but sometimes Cornette and Meltzer have to fill in the blanks.

This collection doesn’t just focus on one territory from back in the day, it covers a lot of ground actually and showcases great matches, primarily from the early-to-mid ’80s.

There is a lot of stuff from Memphis and Texas on here and each match typically features one or more wrestlers that made it big in the WWF or NWA. This is packed full of wrestling stars, mostly in the early stages of their career. But this is also cool to see, as many of the larger guys or guys who got banged up, actually show you what they were capable of before their bodies started to suffer.

I was pretty ecstatic to get my hands on this, just because I love the territory days and seeing wrestlers before Vince McMahon got a hold of them. But I wasn’t prepared for how much I’d appreciate and cherish this collection.

For old school wrestling lovers, this is a must own! In fact, it inspired me to track down other collections and sets of old school territory matches from this era.

Rating: 9/10
Pairs well with: other wrestling compilations of the territories in the ’70s and ’80s. 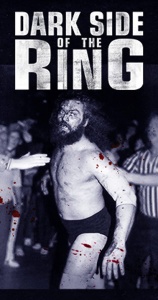 I wasn’t sure what to think about this series when I first heard about it. Wrestling documentaries are a dime a dozen and most of them are produced with an agenda in mind.

However, after watching the first season, I really thought that this was the best series of documentaries on the darker side of the wrestling business. Every episode felt well researched, well presented and very fair.

Interviews with the participants may be contradictory in some aspects but they are presented in a way that allows the audience to come to their own conclusion without any sort of agenda seeping in from the filmmakers or producers.

That being said, I was really impressed by this series and I went into it thinking that it’d just be more of the same and a little too “sensationalist cable TV”, if you know what I mean.

All of the first season episodes pulled me in and didn’t let go. Even the episodes I thought might be redundant like the ones surrounding the Von Erich family and Gino Hernandez gave me a fresh perspective on both of those stories, even though WWE did a pretty good documentary that covered those tales, a decade and a half ago.

Top to bottom, this series is great and I’m really excited at delving into season two, which features episodes on the Chris Benoit and Owen Hart tragedies. It’ll be interesting to see how these guys handle those episodes but after season one, I’m pretty confident that they’ll do those stories justice.

Rating: 9/10
Pairs well with: other wrestling documentaries but this show is hard to top. 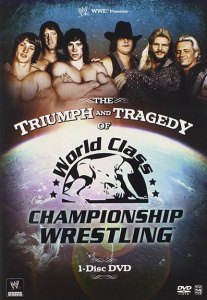 For those who don’t know the story of the Von Erich family, it is one of the most tragic tales in the professional wrestling industry.

This documentary, put out by WWE back in 2007, doesn’t just focus on the bad times, it also focuses on the family’s success and how they built up one of the most popular wrestling territories in the pre-WWF global era.

This examines how World Class Championship Wrestling came to be, how it was run and why the sons of the owner became the company’s top babyface stars.

However, it does take a dark turn as you get deeper into the story and are taken through a series of tragedies that tore the family and their business apart.

In spite of all the doom and gloom, this does a fine job of making you appreciate the product that the Von Erichs produced, as well as giving you a real appreciation of their passion for the business and their legacy in it.

If you have the DVD set of this, you also get six or seven hours of full matches from WCCW. That, in and of itself, is definitely worth its weight in gold.

Rating: 8/10
Pairs well with: other WWE documentaries on the legacies of past wrestling promotions.

There have been countless books that have talked about wrestling territories and their collapse due to the emerging monster that was Vince McMahon’s World Wrestling Federation. However, none of the books I’ve ever read were as good and comprehensive as this one.

I think the main reason this is the best book I’ve read on the subject is because it’s not told from one perspective or about one promotion and its own woes against the WWF juggernaut. This book just lays out the facts, tells its tales and covers every territory under the sun.

This looks into every territory, from all angles and gives a ton of info and history while moving through the late ’70s and the entire ’80s. It’s comprehensive as hell and doesn’t seem to have any bias one way or the other. It helps set this apart from the wrestling book pack, as many are written with an axe to grind or with just one version of a story.

The subject matter here is fascinating, whether one is a wrestling fan or they just like to read about businesses and industries during times of major change.

Death of the Territories was superb, well researched, well presented and honestly, it makes me wish someone would make a documentary on all of this and do it the same justice.

Rating: 8.5/10
Pairs well with: other books on wrestling history. In fact, there are a lot of really good ones that have come out in recent years.