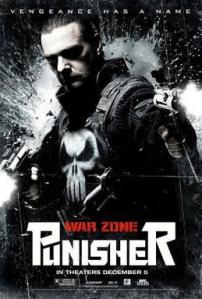 “God be with you, Frank.” – Priest, “Sometimes I would like to get my hands on God.” – Frank Castle

Well, my memory of this film was better than what it actually is now that I’ve seen it again, ten years later.

It has a big problem and really, it’s that it’s boring. Yeah, the action stuff is pretty damn good and badass but all the filler in-between is just uninteresting and really f’n derivative.

Now I do like Stevenson as Frank Castle. I think he looks the part more than any other actor who has been in the role. However, he’s missing the charm of Thomas Jane even if he makes up for it with a much needed harder edge. I mean, I also liked Dolph Lundgren’s version of Frank Castle but that 1989 movie really wasn’t up to snuff and he didn’t even have a skull on his chest.

The only real problem with Stevenson and it’s not his fault, is that he is just very one-dimensional. But the script was written without Frank Castle feeling all that human. But I get it, even in the comics he’s typically a quiet badass that doesn’t let people into his orbit on any sort of emotional level. I just feel that the character, in a cinematic sense, should fall somewhere between Ray Stevenson and Thomas Jane. And that’s something that probably needed to be done at the script level.

Lexi Alexander did fine behind the camera from a visual standpoint and also handled the action sequences nicely. The big battle in the hotel at the end was fun to watch and that early scene where the Punisher murders the mob in their mansion was fantastic. Granted, spinning upside down from a chandelier was a bit stupid, as one of the thugs outside of his line of sight could’ve got in a head shot. Unless the mob has the accuracy of Star Wars Stormtroopers.

This movie just makes me sad though. It had the makings of something that could have been a great Punisher film but it fell flat in just about every regard outside of the action. Plus it had parkour in it, which is just a silly form of freestyle walking. I respect the athleticism but people pushing for it to be an Olympic sport need a lobotomy.

Anyway, if you just want a lot of awesome and senseless violence, this will be right up your alley. Unfortunately, you spend a lot of time waiting around for it between those high octane scenes. 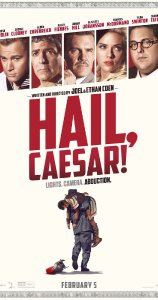 The Coen Brothers always peak my interest when they have a new film coming out. Granted, I’m not a nut like the hardcore Coen loyalists but I am a legit ordained minister of Dudeism, a relgion based off of their film The Big Lebowski.

Hail, Caesar! is a motion picture littered with stars. For the most part, everyone other than Josh Brolin, Alden Ehrenreich and George Clooney feel like they are just glorified cameos. Ehrenreich isn’t even on the poster. But then you have Channing Tatum, Scarlett Johansson and Jonah Hill on it, while they are only in a handful of scenes.

The film is beautiful to look at but it is lacking in just about every other regard. Sure, the acting is top notch but when you have a cast full of talent like this, where most of them are limited to just a few scenes, they all probably had their best stuff because they weren’t bogged down by a rough shooting schedule and didn’t need to focus on anything longer than a few pages of dialogue, if that.

It is an enjoyable movie, don’t get me wrong, it just wasn’t as exciting or as interesting as it would lead you to believe. The introduction of Johansson’s character was magnificently shot and executed but I feel like her character was just brought into the film so that the Coen Brothers had a reason to create their own old school Hollywood synchronized swimming extravaganza. And I feel like that is the true purpose of this film, that the Coens wanted to try their hand at old school filmmaking techniques and to do it while working with all their friends.

Additionally, where we saw footage of films within the movie, they never really looked like pictures from 1951, where this is set. The films, even if they were black and white, were too sharp and too clean. The typefaces used looked out of place and not of that era.

There was just too much going on in the movie. I know that the plot is about Brolin’s Eddie Mannix and how he has to manage all these Hollywood superstars. However, it would have been a more interesting movie had it really just focused on one of his situations. Sure, the others could have been included but too much time was given to things that distracted from the narrative. The only real interesting plot thread was Clooney’s Baird Whitlock being kidnapped and held for ransom by communist writers. In fact, I adored the dialogue in those scenes between Clooney and the commies.

Hail, Caesar! is fun, to an extent. It just feels very empty and although it created a world that truly feels lived in, it didn’t explore it deeply enough. 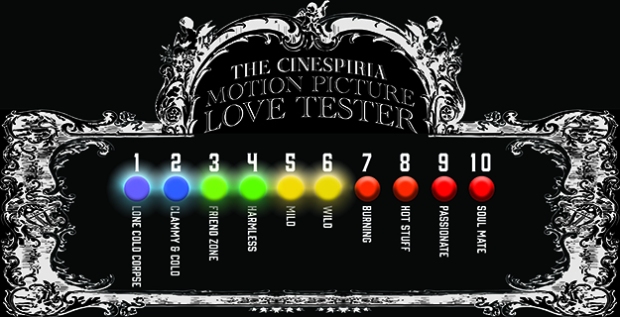