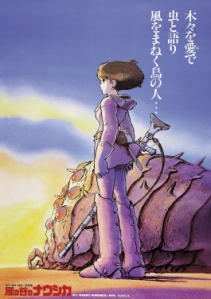 “Every one of us relies on water from the wells, because mankind has polluted all the lakes and rivers. but do you know why the well water is pure? It’s because the trees of the wastelands purify it! And you plan to burn the trees down? You must not burn down the toxic jungle! You should have left the giant warrior beneath the earth!… Asbel, tell them how the jungle evolved and how the insects are gaurding it so we won’t pollute the earth again. Asbel please!” – Nausicaä

This wasn’t officially a Studio Ghibli film, as that studio didn’t exist yet, but many consider it to be the first and it helped pave the way for that studio’s creation and it becoming the standard barer for what was possible with classic, hand-drawn, 2D animation.

Nausicaä of the Valley of the Wind is also the first Studio Ghibli-associated movie that I ever saw. When I fired this up, I didn’t think I had seen it but once certain scenes came on, it flooded back into my memory from childhood. But I’m not sure if I saw this in the theater in the ’80s or if it was on VHS or premium cable. The version I saw would’ve had a different dubbing track than the version that exists now.

Anyway, I absolutely loved this movie from beginning to end. Sure, the story is a bit convoluted and I found some of the details hard to follow, although I am getting older and I partake in edibles in the evening on most nights. So I don’t want to pound too heavily on the plot. Also, some things may be lost in translation, which is common with anime and usually due to how well or poorly the translation and dubbing are.

I felt like the dubbing was pretty damn good, though, and I enjoyed the English voice cast quite a bit. I especially thought that Chris Sarandon’s work really stood out and provided some solid laughs at points, because of how pompous he made his character.

The thing that blew me away, which typically blows people away with Ghibli films, is the animation. It’s just beautiful and smooth and for 1984, I can’t think of any other non-Ghibli movies that looked better.

As I said, this helped pave the way for Studio Ghibli being born. Without this film, we may not have ever gotten all their other iconic work. While I can’t say that this is Hayao Miyazaki’s best feature film, it might very well be his most important. 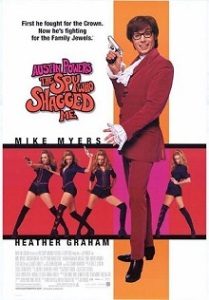 “I can’t believe Vanessa, my bride, my one true love, the woman who taught me the beauty of monogamy, was a fembot all along. Wait a tick, that means I’m single again! Oh behave!” – Austin Powers

Out of the three movies in the Austin Powers trilogy, this one is my favorite, even though all the films are really close in overall quality.

There are a few reasons why I like this one slightly better.

First, I like the plot better than the first movie. It’s more complex, more interesting and doesn’t simply try to rehash the beats of the first picture. There’s also a time travel element that works for me, even though it quickly breaks the fourth wall dismissing the paradoxes and narrative problems it creates. Because, honestly, this is a mindless, fun Austin Powers movie and you shouldn’t be thinking that hard anyway.

Second, I loved all the new characters from Mini-Me, Fat Bastard and especially Rob Lowe, as the younger version of Number 2.

Third, this has Heather Graham in it as the main “Powers Girl” and she’s always been a favorite of mine and certainly my favorite babe in a film series packed full of incredible, badass babes.

Apart from those three things, this film is just as fun and entertaining as the first movie. Additionally, the cast seems much more at-home in their roles and they’re even better than they were in the previous film.

I also like this chapter because it shows you which jokes sort of become reoccurring gags. Many of these bits became staples of the series while also becoming one of the more endearing things about this goofy, amusing franchise.

It’s also obvious that this movie had more money to play around with. There are bigger, better sets and more of them. Dr. Evil gets multiple lairs and each of them are much grander than the previous film’s underground bunker.

All in all, this is still solid, fun escapism and it made me smile in a young decade that hasn’t been very kind to most of us.

Rating: 7.5/10
Pairs well with: the other Austin Powers films and other ’60s styled spy spoofs like the Dean Martin Matt Helm movies and the original Casino Royale. 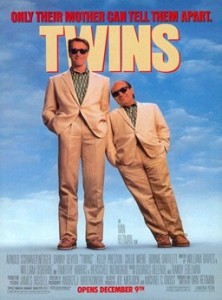 “My name is Julius and I am your twin brother.” – Julius Benedict, “Oh, obviously! The moment I sat down I thought I was looking into a mirror.” – Vincent Benedict

When Arnold Schwarzenegger was at the absolute top of the action film world, he decided to be in a comedy. At first, that may have seemed crazy. But the end result was this great picture that in my opinion, is a true comedy classic of its era.

Granted, this also had Danny DeVito in it, who never disappoints, and it was directed by Ivan Reitman, who was a great comedy director at his creative peak.

I think this film has actually aged really well too. Sure, it’s definitely a product of the ’80s but it is still a very human story that is carried by the charisma and chemistry of its two stars.

Schwarzenegger and DeVito just felt like a natural pair and even if they aren’t really brothers and don’t look the part, as that’s part of the gag, they just clicked and their connection and relationship felt truly genuine. And maybe Schwarzenegger doesn’t get enough credit as an actor but this allowed him to show his range and he did stupendously well in the role. It’s damn near impossible not to love him in this. And even if DeVito is a shithead for most of the film, you understand why he’s broken and I find it hard not to sympathize with his character and sort of grow into loving him as well.

At its core, this is just a feel good movie and it came out in a time where family dynamics were changing. I think that for a lot of people, it gave them hope that even if their upbringing might not have been the ideal, cookie cutter situation, that maybe, in some way, they could find the people in their life that would become family.

It’s really hard to peg but this is just a film that resonated with me at an early age and it still does. I don’t really think that has to do with nostalgia and for me, at least, it has to do with how good this is top to bottom from the characters, the story and their emotional journey.