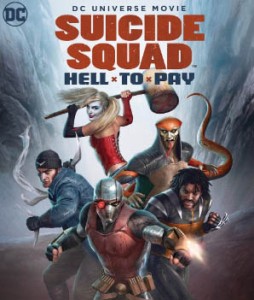 “I know I’m going to Heaven – anyone who can put up with Mr. J deserves a break.” – Harley Quinn

It seems as if these DC Comics animated movies are getting better and better. Pretty much most of the stuff that Sam Liu produces and directs is top notch. Also, I love that these are for an adult audience.

While I pretty much hated the live action Suicide Squad movie, I’ve been a fan of the comics for some time. This animated feature does a pretty good job of capturing that magic in a way that the live action film completely missed.

The voice cast in this was really good too and I especially enjoyed Christian Slater as Deadshot. I hope he plays the character more in the future and if this spawned its own series, I’d watch the followups.

This movie is violent but it works, as this film is presented in a grindhouse style. Now the look of it is crisp and clean like other DC animated films but it has that modern grindhouse edge to it in it’s credits sequences, editing style and musical score. While the modern grindhouse thing really peaked with Tarantino and Rodriguez’s Grindhouse movie over ten years ago, it’s interesting seeing that style in this format.

The story is also good and it sets up a situation where these characters have a sort of loophole to work around the protocols the government has in order to control these villains forced to do good. There is a lot of back stabbing, twists and turns.

This also features a ton of villains whether they are members of the Suicide Squad or not. And while a lot of characters are crammed into this 86 minute picture, everything flows well.

This is solid. It’s one of the better DC Comics animated features to come out. 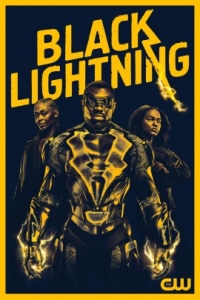 I wasn’t sure what I thought about Black Lightning over the first couple of episodes but as the first season rolled on, I grew to like it.

It’s a CW show, so it is guaranteed to come with a certain level of cheesiness. However, this isn’t bogged down by the cheesy nonsense like The Flash, Supergirl, Legends of Tomorrow and sometimes Arrow is.

While the show does have some romance and it focuses on a family dynamic, it doesn’t beat you over the head with love dovey sentiment, it feels genuine and the love shared between characters is more organic than what we’ve seen from the other CW superhero shows. That doesn’t mean that it won’t get cheesy, as it continues into the future.

I really like Cress Williams as Jefferson Pierce a.k.a. Black Lightning. It’s like he was born for the role and he plays both the man and the hero, exceptionally well. I’m also a massive fan of Krondon’s Tobias Whale, as the character is fleshed out better than his comic book counterpart, who I always just saw as a poor man’s Kingpin.

The one person I absolutely love on this though is James Remar. He plays Black Lightning’s mentor and partner, even if there is a lot of tension that develops between the two. Ultimately, he is a part of the family and he is there to fight the good fight when the chips are down. I loved Remar when I was a kid because I liked him in The Warriors and then I went on to have a different appreciation for him when he played Dexter’s ghost dad on Dexter. Remar is one of those guys that is a clutch hitter but doesn’t always find himself on a good team. I think he’s found a nice roster spot on the Black Lightning team.

One thing that makes this story work so well, is that it feels smaller in scale. While Freeland is a city that’s come under siege due to powerful gangs, the world this is set in doesn’t feel as grandiose as the other CW superhero shows. It feels more like it all takes place in a smaller area, sort of closed off from anything beyond its borders, as the problems in Freeland are just too serious and real. This could totally fit in with the Arrowverse without needing to acknowledge it, which probably will happen in the future, as both Cress Williams and Arrow‘s Stephen Amell want to crossover. My two cents: I’d sneak Deathstroke onto the show to introduce the larger world. We don’t need aliens and shit.

It’s hard to tell where Black Lightning plans to go beyond season one but I hope that the producers build off of what was established in just the first 13 episodes and don’t sort of fall into the same traps when the other CW shows ran on beyond their rookie years.

Also, this did a good job of not being too political. It dealt with social issues well and didn’t beat you over the head with it like the comic book medium tends to do. Well, the big bad white villain in the show had to say, “Make America great again!” twice in the season finale but hopefully that’s it for the sociopolitical cringe.

Rating: 7.5/10
Pairs well with: All the current DC Comics shows on the CW.