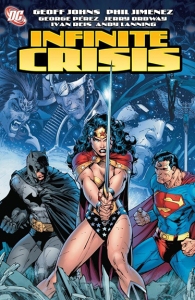 I hated Crisis On Infinite Earths but I had hoped that this more modern version of it would’ve been more to my liking. I guess it is better but not by much because it falls victim to the same bullshit.

It’s overloaded with characters to the point that it’s difficult to follow and it just becomes a mega clusterfuck, trying to be larger than life while wedging a fuck ton of characters into double splash pages.

DC likes doing these big events that try to “reset” the multiverse and all they do is become overly complicated messes that ignore their own established rules because new writers don’t have time to read the old stuff or pay attention to it. In Geoff Johns’ defense, the event this is a spiritual sequel to was a convoluted shitstorm, so I don’t blame him for paying it no real mind.

If I’m going to try and look at the positives, there is really only one: the art by Phil Jimenez. It’s spectacular and it is lively and even if I don’t enjoy the story, it’s hard not to get caught up in the absolute beauty of Jimenez’s work. It’s stunning and even on those overcrowded splash pages, he fills the space magnificently and dynamically.

Apart from that, there’s not much to say. This isn’t as messy as its predecessor but it is still an over-sized shit meatball.

Rating: 5/10 – because of the art more than anything else.
Pairs well with: other massive DC Comics events that are overloaded with characters.

I wasn’t sure what to think going into this series. I mean, I always liked Stephanie Brown as Spoiler since she first popped up in the ’90s but I’m not too keen on anyone other than Barbara Gordon being Batgirl.

However, I’m really happy to say that this book impressed me and was a heck of an exciting read.

Stephanie Brown is just a fun character and in many ways she reminds me of Barbara Gordon before she became Oracle. She has a lot of energy and her personality is infectious and definitely comes right off of the page.

That being said, this is very well written. Bryan Q. Miller was hitting homers right out of the park with just about every issue of the twelve that are collected in this big volume.

Reading this now is also interesting because it all takes place in the era where Dick Grayson a.k.a. Nightwing was filling in for Batman. It creates an interesting dynamic between the characters and what they all think Bruce Wayne wanted for his legacy.

Barbara Gordon is in this as Oracle and she is essentially the new Batgirl’s Alfred. It’s a nice passing of the torch to Stephanie Brown and it sort of legitimizes her. As a reader and fan of Barbara, her acceptance of Stephanie translates to the reader who may have reservations about a new Batgirl.

All the story arcs within this served a purpose and it was neat seeing Stephanie grow in this role. The final arc, a four parter called Flood is the highlight of the book. It’s a story that features The Calculator as the villain and it calls back to one of the more important Oracle stories.

This book was cool. I dug the hell out of it and I can’t wait to read the second volume.

And man, the covers are beautiful.

Rating: 8.5/10
Pairs well with: the volume that follows this one.