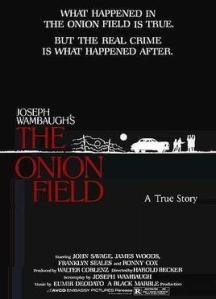 “Any man who gives up his gun to some punk is a coward. Any man who does can kiss his badge goodbye, if I can help it. You’re policemen. Put your trust in God.” – LAPD Captain

I had never heard of this movie until the Criterion Channel put up a neo-noir collection, recently. Going through it, I figured I’d give this picture a watch, as it was one of the few in that collection that I hadn’t yet seen.

This also has James Woods and Ted Danson in it, so I was pretty intrigued, considering I had never stumbled across this.

The story is based on a true crime book and the film is written by the same author, which I guess helped keep things as accurate as possible. With real world stories, accuracy is hardly a priority for Hollywood.

First and foremost, this is incredibly well acted. Once the big, fucked up event in the film happens, John Savage’s acting goes to another level and the film switches gears, showing a once badass man break down because of the death of his partner and because the broken justice system is failing to make the killer pay for the crime.

The first hour of the story gives the background on the people and the events that led to a cop being murdered by a scumbag criminal. At the midway point of the film, we see the traffic stop that leads to the cop’s murder and his partner’s escape. The last half of the film focuses on the fallout and how the surviving cop can’t deal with justice not being served.

This is an emotionally heavy film in the back half and it leaves you incredibly pissed off, as you start to wonder if the scumbag is going to get away with the heinous, cold-blooded crime.

Beyond the great acting, this is a film that has great atmosphere. Watching it, it feels dark, confined and muggy. You feel stifled by the weight of it and feel the emotion pretty intensely. However, even with the genuine emotional connection to the primary character, the film really suffers from its pacing and structure. Something just felt a bit off in that regard and the film drags in points.

Still, I enjoyed this and was glad that I discovered it. 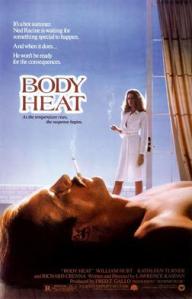 “I’m really disappointed in you, Racine. I’ve been living vicariously off of you for years. You shut up on me now, all I have is my wife.” – Peter

Lawrence Kasdan is probably most known for being one of the writers that worked alongside George Lucas on the original Star Wars trilogy, as well as Raiders of the Lost Ark. But here, he not only writes but he directs. And it was his working relationship with Lucas that helped him get this film produced. In fact, Lucas put up some of the money himself, even though he’s not officially given a producer credit.

It’s interesting that Kasdan’s directorial debut was something so different than what audiences had known him for, which were primarily high adventure pictures. But Kasdan made a very true to form film-noir picture. But maybe it was too close and that worked against it; I’ll explain.

Kasdan’s story for Body Heat drew inspiration from the 1944 film-noir classic Double Indemnity. In fact, there are some pretty stark similarities but Body Heat is not a complete rehash and it certainly stands on its own, despite having very similar cues.

The film is really carried by the strong performance by William Hurt. Kathleen Turner stars alongside him as the typical femme fatale and while she’s pretty good, she comes off as more of a caricature of the femme fatale archetype than feeling like she is giving a genuine performance. But I don’t think that’s on her, as she’s proven how capable she is. I think it could be a combination of Kasdan’s direction and writing, as he was possibly trying to squeeze her into an image he had, as opposed to letting her put more of herself into the role.

Still, Hurt offsets the awkward clunkiness of Turner and the rest of the cast between Richard Crenna, Ted Danson, Mickey Rourke and everyone else, keeps the ship moving in the right direction.

The story is pretty good but it’s not anything new, especially if you’re a fan of the noir genre. Despite a few good twists and turns throughout this labyrinthine plot, nothing that happens is shocking and it is kind of predictable in retrospect. In fact, even though I enjoyed this, it didn’t give much of anything new to the genre it emulates.

In regards to it being a modernization of classic film-noir, it isn’t the first film to do that either. But if this is anything, it’s Lawrence Kasdan’s love letter to film-noir and for the most part, it’s a nice love letter that makes its point rather well.

Body Heat certainly isn’t forgettable but it’s a long way off from redefining what noir could be like Blood Simple and The American Friend did. But strangely, I did enjoy this a hair bit more than Blood Simple.

Rating: 7.25/10
Pairs well with: other neo-noir films of the era: Blood Simple, The American Friend and the remake of The Postman Always Rings Twice. 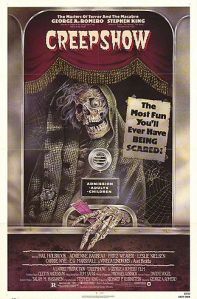 “I drove out there with the remains of three human beings… well, two human beings and Wilma.” – Henry

Creepshow was one of the first modern horror films I experienced as a kid. However, I was a kid in the 80s, so this was modern then. Now it is thirty-five years old. Revisiting it now though, is still a real friggin’ treat.

I love this movie. I admit that a lot of my warm and fuzzy feelings for it can be due to the fact that I’m a total sucker for nostalgia but it is a damn good picture for its time. I’m not even a huge anthology horror fan but when these films are good, I absolutely love them.

Creepshow is one of the best horror anthology films of all-time. Each story works and George A. Romero created a true piece of cinematic magnificence outside of his Dead series. Plus, having the help of Stephen King’s pen made this a bit more unique than other films like it.

There isn’t a dull story out of the five that we get within this film. Six stories if you count the intro and ending.

The weakest story is probably the one that stars King himself, as a man that becomes possessed and overcome by some sort of alien plant life. Even that one is entertaining because King plays the role so hilariously. It is also the shortest chapter.

The best story of the bunch is The Crate, which really could have been its own film and worked really well. It is also the longest chapter and feels like a throwback to an H.P. Lovecraft tale. In this story, we see a janitor discover a strange crate under a staircase at a college. It is from an expedition, decades earlier. Inside the crate is a hungry beast that pretty much want to devour everyone. But it is the monster itself that is the star of the movie, in my eyes.

The film has a good all-star cast with two highlights. The rivalry between Ted Danson and Leslie Nielsen is well orchestrated and they play off of each other like the pros they are. The other is the relationship between the quiet and sweet Hal Holbrook and his annoying as hell wife played by Adrienne Barbeau. It is such a comedic mismatch but it works too a t.

The visual comic book style highlights within the film, give it an otherworldly life that really wraps the movie in that old school pulp feel.

Creepshow is so enjoyable and the funny bits are still funny. Yes, it has a real sense of terror but it is a load of fun.
Rating: 8/10