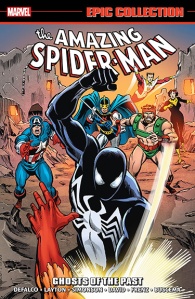 Being that this beefy volume was an Epic Collection, it was chock full of several story arcs. Luckily for me, most of them were really good. But then this also came out in a great era for The Amazing Spider-Man comic series.

The first big arc features Hobgoblin and it is a follow-up to Spider-Man: Origin of the Hobgoblin, which I recently reviewed and f’n loved. In fact, I think it’s the first Hobgoblin story after the arcs that were featured in that superb collection.

Beyond the Hobgoblin story, we get about a half dozen short arcs featuring a myriad of villains and other heroes. This also includes the first appearance of Silver Sable, which was a pretty neat story.

After the Hobgoblin stuff, the two that really stick out are the one where Frog-Man and Toad team-up and the Firelord story that brought in the Avengers.

The Frog-Man and Toad tale was goofy and just filler but it was also fun and engaging. However, I’ve also always liked Frog-Man, despite his ineffectiveness as a real threat to anything.

The Firelord story was cool as hell, as Spider-Man was truly tested, as the villain is a cosmic powered being and damn near invincible when facing off against a sole Earth hero. The Avengers had to get involved and it also showed Spider-Man coming pretty close to going over the edge. Knowing what I know now, it was probably due to the effects of him recently wearing the Venom suit.

In the end, this was a cool run of issues. It takes place between Spidey getting the Venom suit and his first encounter with Venom. He switches between the classic red-and-blue suit and the safe black suit throughout this. I always found that confusing when I was a kid, as I wish he just would’ve worn the black outfit for that stretch. 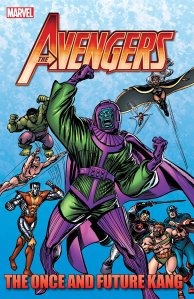 I hate when I buy a thick, hefty collection that is sold to me as one thing, but once I buy it I find out that the thing I bought it for is about a third of the total collection and the rest of the volume is padded with other random stories.

While the issues collected here are presented in chronological order in how they appeared in single issues of the Avengers comics, they are all tied to larger stories or continued in other comics.

It’s pretty fucking infuriating when companies do this because I just wanted to read a Kang story that I had hoped would be pretty epic based off of the page count of this large Avengers release.

Instead, I got a medium sized Kang story and then a bunch of random plot threads that were left incomplete and open ended as they tied to Secret Wars II, Fantastic Four, X-Men and a story about both ’80s Avengers teams playing baseball.

Had I just read the Kang story, this would’ve been great. It would’ve been even better if it was reduced to the roughly four issues that the story took place in and I was charged a lot less than what I played for this disorganized mess.

Now to be fair, I did like most of this but when you’re pulled in one direction just to be left with blue balls, it’s pretty irritating. Especially, when you’re the one paying for it.

As far as the Kang story goes, I loved it. It was one of the best I’ve read and it featured one of my favorite incarnations of the Avengers team, as I started reading this series around the same era.

Had I known that I was going to get shafted by this, I would’ve just forked out the money for the less than a handful of physical floppy issues I needed for the story I wanted.

Rating: 6.5/10
Pairs well with: other Kang-centric stories, as well as other comics that happened around the events of Secret Wars II. 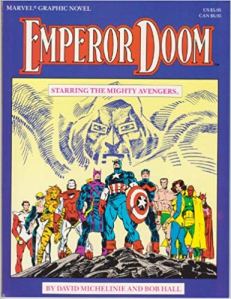 I used to own this and I need to round up another copy. It was one of my favorite “big” stories of its time. But all of the Marvel graphic novels of the ’80s that I owned, all have a special place in my heart.

Reading it now, it was still a really engaging story that featured my favorite Avengers of the ’80s, the West Coast Avengers. It also throws in Captain America and Namor. However, Namor is initially one of the villains of the story due to his allegiance to Atlantis and his willingness to do anything to secure his homeland’s safety.

The main villain is Doctor Doom, if the title wasn’t enough of a hint. This is also one of his grandest schemes and he actually pulls it off and succeeds at becoming the Emperor of Earth. However, the Avengers do end up coming to their senses and stop Doom.

This story also features the usually underutilized Purple Man. It’s his power that Doom steals and then harnesses on a global scale, giving him control of humanity’s minds.

Under Doom, the Earth finds peace and some of its major problems are solved. However, those pesky Avengers have to muck it all up because humans should be free to make their own decisions and not be mentally enslaved by some global puppet master. I don’t think that modern Marvel writers would agree with that but hey, they’re also killing their own company.

Emperor Doom is a solid story. However, it may have benefited from more space than a 64 page graphic novel could allow. This could have been a major crossover event and maybe have been better than it was.

Still, it is a good use of its 64 pages and it was a hell of a lot of fun to revisit.

Rating: 7.5/10
Pairs well with: other Marvel graphic novels from the era.