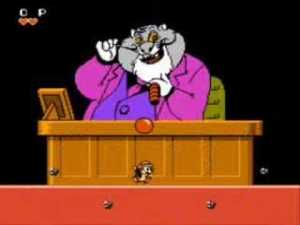 I used to watch the hell out of Chip ‘N Dale: Rescue Rangers after school, back in the late ’80s. So when this game came out, I was pretty stoked to play it. From memory, I mostly remember liking it quite a bit.

Playing it in 2020, for the first time since probably 1990, I have to say that it hasn’t held up very well. Especially, after having recently revisited the far superior DuckTales games.

It’s a competent game with good controls, simple and sharp mechanics and easy gameplay. However, the level design is overly simplistic and not very exciting. Also, the game is pretty damn easy. At least, I found it to be lacking any real challenge.

The boss battles were pie. Most enemies were just easy to dodge and there didn’t seem to be much incentive in going out of your way to grab items. I just blew through every level and crushed the whole game in about 30 minutes or so.

It’s not a bad game, it’s well built and executed in spite of its basic bitch levels. There are many games that are much worse for the NES.

Rating: 6/10
Pairs well with: its sequel, as well as the other Disney games for the original Nintendo.

I have never played The Lone Ranger for the original Nintendo but I went into this knowing nothing about the game and without having any expectations.

What I was really surprised to discover is that this is one of the greatest 8-bit action RPGs of all-time!

Seriously, no one talks about this game, I’ve never heard anything about it and because of that, I have to consider it a real hidden gem among the 600+ titles that were released for the system.

The thing that makes this game so great is that it employs multiple gameplay styles from bird’s eye view world traveling to side scrolling, vertical scrolling and first person shooter action levels. You fight in towns, on moving trains, in caves, in forts, in hotels, on mountains, in the desert and even get to fight on horseback in two different ways.

Man, this game is just cool as hell and a shitload of fun! It’s really damn difficult but it isn’t unbeatable. I did beat the game, even though it took some time, and it gave me a real sense of accomplishment unlike many games from the era that have really underwhelming endings. This game’s ending was pretty superb for the time.

There isn’t a dull moment or a boring mission. The game designers did a fantastic job at keeping every area of the game fresh and unique, always adding new twists and ways to play the game.

For the 8-bit era, this is close to a masterpiece. The only things working against it are a lack of maps in the first-person stages and frustrating controls that switch your weapon when you jump.

Rating: 9.5/10
Pairs well with: other action RPGs and western games for the NES.

Man, I haven’t played Mighty Bomb Jack in ages! But I had pretty fond memories of it, even though I remember it being frustrating as hell.

Overall, it’s a really solid, fast paced game that is also tremendously hard after the first few stages. It has strange mechanics that are tough to adapt to but once you do, the gameplay does get a lot more fun. There’s definitely an in-game physics learning curve though.

I like the graphics, the level design (until the last few levels) and the music.

It reminds me of a lot of other scrolling 8-bit platformers but it mostly reminds me of great puzzle games like Solomon’s Key and its sequel Fire & Ice. While this isn’t exactly a puzzle game, it just feels similar to those other ones.

I did beat this game but I had to play it on an emulator with infinite lives. I don’t think I could’ve beaten it otherwise, as it can get pretty maddening towards the end, as some jumps are incredibly difficult and you get easily overwhelmed by enemies.

For the record, I got the bad ending because just getting that one was hard enough.

I have never played this game, as it came out at the end of the original Nintendo era and I had moved on to Sega Genesis and Super Nintendo. I probably wouldn’t have appreciated it, anyway, as I was into better graphics, better sound and hadn’t had good experiences with other Indiana Jones games for the NES.

Playing it now, this is the best Indiana Jones game on the NES console. It’s actually kind of fun and it has better controls and overall mechanics than the other games.

Now the controls can still be wonky and frustrating but as bad as the other games were, this is actually a step up.

Additionally, there is more than one gameplay mode. You do the standard side scrolling action stuff but you also get to fly a plane and drive a motorcycle. There are also cool locations. I enjoyed the train level, as you punch and whip your way through baddies on a train moving through the European countryside.

For those familiar with the G.I. Joe games released on the NES, this has a similar gameplay style on most levels.

The game is rather difficult, however, especially some of the later boss battles, as the amount of damage you can take is pretty minimal.

Ultimately, I was pleasantly surprised by the game and, for the most part, like it.

I have never played 8 Eyes but I always thought that the box art and logo were really cool. But it was sort of lost in the sea of other side scrolling fantasy games of the time and I never heard much about it from friends, as to whether it was good, bad or just meh.

But I figured that I’d fire it up and attempt to give it a playthrough because I typically love these sort of games and there are still many old school Nintendo games that I slept on as a kid because my allowance was shit and my choices of what games to rent was pretty limited at the ol’ mom and pop video store.

Overall, I really enjoyed this. However, it was confusing at first, as I wasn’t sure if I needed to beat levels in a certain order and because the controls are pretty complex for a game from this generation. The controls are still simple enough but it took some mental adjustment and a bit of time to understand how to do the falconry stuff.

I though that most of the level designs were pretty good but there was a pretty big variance on difficulty and size of the maps.

There is a gigantic mix of different enemy types and most of them are easy enough but there are a few that are frustrating. Unfortunately, the boss battles are all fairly annoying, not fun and they take away from the overall solidness of the game.

8 Eyes looks good though, with nice sprite design, a good color palate and an environment that uses the best aspects of the Castlevania games without being hindered by wonky mechanics.

Rating: 7/10
Pairs well with: the Castlevania games, which it’s design is very similar to, as well as other side scrolling fantasy games for the original Nintendo.

I vividly remember playing this game for the first time. It was at my cousin’s house just outside of New York City circa 1988. I thought it was pretty damn cool but I never really got to play it again until emulators and roms became a thing in the late ’90s.

I’ve never played the game all the way through though, so I figured I’d revisit it in an effort to try and kick its ass so that I didn’t have to review it with my tail between my legs.

Well, I kicked its ass… but it was definitely not a cakewalk.

The reason being is actually my biggest gripe about the game.

The main problem I have with Section Z is that its not really clear which gate to take at the end of each stage and how you’re supposed to progress. So I had to read up on that a little and I got the gist of it. Kids in 1988 without the Internet probably lost their hair before middle school.

Anyway, there are basically three sets of levels. To beat each one, you have to get to the level with the barrier shield and destroy it. Once you do that, you’ve got to figure out which gate will then advance you to the next section of levels. Along the way there are also some cool boss fights. I thought that the final boss was solid because it looked cooler than anything else in the game and the fight was fun.

The gameplay is pretty good and fluid. I like the mechanics, they’re easy to use and understand and even though the levels can get repetitive, you don’t get bored. Well, unless you’re stuck in a loop of stages you can’t find your way out of because there’s no way to really know where to go without a guide or a walkthrough.

Section Z is nowhere close to being a perfect game or one you’ll be dying to play after beating it but it’s a really satisfying side scrolling shooter that is good at killing time on a rainy day.

Rating: 6.75/10
Pairs well with: other 8-bit side scrolling shooters in a sci-fi setting. For example: Gradius, Lifeforce, MagMax, Seicross, etc.

This is a game that I had never played. I remember seeing the box on shelves at most of the mom and pop video stores around me but I didn’t rent it because the box art didn’t really tell me anything about the game and frankly, I’m not sure what it’s supposed to convey now that I’ve played this.

I’m glad that I gave it a shot, all these years later, but I only did so due to an article I read about underrated NES games. This one sounded cool because it has different modes of play: one that plays like an outer space version of 1942 and another that plays like a bird’s eye view dungeon game similar to the original Zelda but with a futuristic sci-fi atmosphere.

This also reminds me a lot of Crystalis, which I played through recently and adored.

At first, I wasn’t sure what to do but it didn’t take long for me to figure things out. The only real trouble I had was opening some of the gates, as the later ones in the game all require you to do something unique to access them. But none of that ruined the gameplay and the only time I really got stumped, I figured it out fairly quickly.

For a game that is, more or less, two games in one, both modes are well designed and a hell of a lot of fun. The game, at its best, is pretty refreshing and exhilarating.

The Guardian Legend is a game that probably would’ve been a massive hit had it existed in the time of the Internet. I just don’t know anyone who played it and because of that, I never heard a buzz about it.