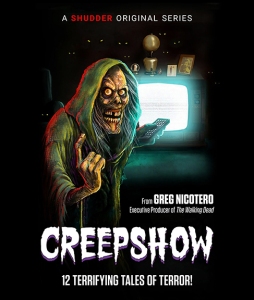 I’m a few months late to the party but I finally got around to watching the Creepshow television revival on Shudder. And now that I have, it’s just one more great reason to subscribe to Shudder, which has a much lower price than the average streaming service.

Schilling aside, I swear I’m not a Shudder employee, I’m just a happy customer, the show is pretty much what I expected in that most of it is pretty enjoyable but the quality varies from story to story.

I’ve stated before that I’m not a big anthology fan and the main reason for that is because of consistency. Horror anthologies, especially, seem to be like a pendulum swinging back and forth from good to bad within the same film.

While this show isn’t that different, most of what’s here is engaging and the few tales that I didn’t like weren’t terribly bad. Plus, each 45ish minute episode contains two different stories. So even if you aren’t feeling something, it’s not going to take up too much of your time.

I think the only one I really didn’t like was the fat loss leeches one, which was surprising to me as I’m a fan of Paul Dini’s writing, mainly because of Batman: The Animated Series and his run on Detective Comics, and I’ve always liked Dana Gould.

Other than that, there was something about each episode that lured me in. I think some of my favorites were the first tale, which was written by Stephen King, then the ghost head one, the suitcase one and Nessie one. Maybe I’ll do a list where I rank the segments soon.

Anyway, this was a good show that holds onto the spirit of the films. And in a similar vein as those movies, it also feels like it’s channeling the anthology horror comics of old. I felt like I was watching EC Comics come to life.

Rating: 7.5/10
Pairs well with: the Creepshow movies, as well as other horror anthology TV shows and movies. 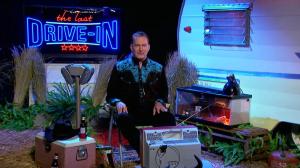 Joe Bob Briggs is one of the most important Americans that ever walked God’s green Earth. In fact, he’s probably the greatest Texan that ever lived and that’s a huge state with a lot of history.

So when I heard that Joe Bob was coming back with a new show, I was ecstatic. But if you’re a loyal reader of Talking Pulp (and its original form: Cinespiria) then you already know this.

But it’s already been about a year and Joe Bob, thanks to the wonderful people at Shudder, has provided us with three marathons and a full season of The Last Drive-In.

Also, I have to give a special shout out to Darcy the Mail Girl, who is super fucking cool to the fans and because of this, breaks Twitter every Friday night.

With all that being said, I wanted to rank all 39 films that have been featured on The Last Drive-In (thus far).

These 39 motion pictures are ranked based off of what they were rated in their reviews here on Talking Pulp.

So without further ado, roll that beautiful scream footage!

I’ve seen quite a few documentaries on the history of horror as well as ones on blaxploitation and grindhouse movies. What makes this a unique film is that it examines the history of black horror, specifically.

This is well organized, fabulously presented and the thing that really gives this a lot of life is all the people that they were able to bring in and chat about the subject matter.

Also, this was told from the perspective of black people. We were able to see how certain things in movie history effected them, which is refreshing when most documentaries that cover black cinema usually feature a lot of white voices trying to interpret what they assume black people were feeling.

I think that this film gave a lot of clarity to the cultural impact of certain horror tropes regarding minority characters, as well as Hollywood tropes about race in general.

Most importantly, this honors the films it features, as well as all the talent that worked behind the scenes and on the screen.

This is a Shudder exclusive but between this, the new Joe Bob Briggs show and all their great horror film selections, you should already be subscribed. Plus, it’s cheaper than all those other streaming services.

Rating: 7.5/10
Pairs well with: other retrospective documentaries on horror and blaxploitation cinema.

Not the Funeral Home, Shudder, 13 Episodes/Segments, 120 Minutes (roughly) (per episode) 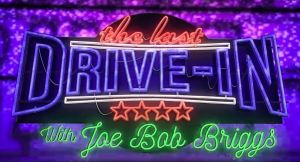 People that have followed this site back when it was still Cinespiria, know that I have a pretty solid love for Joe Bob Briggs. He is the greatest Texan that ever lived and possibly the greatest American as well. I have been watching this guy since I was in grade school because my parents had no idea what I was doing late at night on the weekends. I could’ve been snorting lines off of a dead ferret for all they knew.

Well, I’ve watched Joe Bob my entire life other than a nearly twenty year gap between the cancellation of Monstervision on TNT and then the birth of this awesome show, which just dropped a few days ago.

Anyway, if you too are a hardcore Joe Bob fan or just loved Drive-In Theater or Monstervision than this thirteen film marathon is exactly your cup of Joe Bob!

This was absolute perfection, Joe Bob didn’t miss a damn beat and it felt exactly like those shows did way back in the day. I stayed up for the entirety of this 26-plus hour marathon, other than dozing off a bit during Rabid and Daughters of Darkness but I pushed on through with a big ass mug of dark roast. I didn’t indulge in bottles of bourbon because that shit would’ve knocked me out. I’m much older than I was when Joe Bob used to be on TV and therefore, I am not as resilient. Had I known they would just end up streaming all these movies as episodes after the marathon, I wouldn’t have pushed myself so hard.

Anyway, what made this so f’n great is that it streamed live on Shudder and therefore, it didn’t have to be censored like the movies when Joe Bob was on TNT. We got titties, gore and no commercials! Just Joe Bob and the movie. And man, it was great hearing him add his commentary once again.

Joe Bob presented thirteen films. In order, those films were Tourist Trap, Sleepaway Camp, Rabid, The Prowler, Sorority Babes in the Slimeball Bowl-O-Rama, Daughters of Darkness, Blood Feast, Basket Case, Re-Animator, Demons, The Legend of Boggy Creek, Hellraiser and Pieces. I’ve already reviewed most of these films but for the handful I haven’t reviewed, I will have those posted in the next few weeks.

It just felt really good having Joe Bob back on TV. They’ve basically called this his retirement from hosting movies but this was so huge for Shudder that it crashed the website a few times. I only missed out on the first hour and everything ran smooth after that. But the demand is obviously there and really, this should lead to Joe Bob making a come back on a full-time basis.

I don’t want this to be the end. You can’t bring back Joe Bob and then just take him away after a day. It’s cruel, it’s mean and it’s un-f’n-American!

Rating: 10/10
Pairs well with: Joe Bob Brigg’s other great shows: Drive-In Theater and Monstervision. Good luck tracking down full episodes of those, however.