Sergio Martino did this film a year before his most famous one, Torso.

While he’s not my favorite giallo director, he has done some really memorable work that probably deserves its place alongside the giallo masters like Mario Bava and Dario Argento.

Many giallo aficionados seem to like this one too and while I do enjoy the first act of the movie, it drags on and falls kind of flat for me. Although, I do like the ending, as it homages Edgar Allan Poe quite nicely and in the most Italian way possible.

I enjoyed the three main actors in this and seeing Luigi Pistilli was kind of cool in that his character is truly the antithesis of what I think is his most famous role as the priest brother of Tuco in The Good, The Bad and The Ugly.

The other two leads are Edwige Fenech and Anita Strindberg, who both put in believable performances even when the story calls for some over the top antics.

My main issue with this film is the pacing. It’s only 97 minutes but those 97 minutes felt like two hours. There are some minor side characters and side plots that simply existed to give the killer more kills. That’s not necessarily a bad thing in a slasher-esque giallo but most of this just felt like soulless filler in a movie that could’ve been more fine-tuned in dealing with the core actors and their dynamic.

I do like the look of the movie, even if it isn’t as opulent and vivid as the work of the better giallo filmmakers.

Ultimately, this was okay but it’s not Martino’s best work and with that, it’s not anywhere near the upper echelon of ’70s giallo.

“Death is the keeper of secrets.” – Franz

Torso is a pretty well-respected giallo picture not directed by Dario Argento or a Bava. I even knew about it as a kid when I had no idea what a giallo picture was. I remember the VHS box art sitting on the shelf in the horror section of just about every video store I visited on the regular.

I ended up watching it in my teens but it’s been that long since I’ve seen it, so I figured I’d revisit it. Plus, I have a much richer understanding of what giallo is now.

Overall, this one is kind of mediocre. Although, I do like the look of the killer a lot and I can see where this specific picture was probably instrumental in inspiring a lot of the American and Canadian slasher films that would follow a decade later.

If you’ve seen a lot of giallo already, this one isn’t going to shock or surprise you. However, it’s filled with enough gorgeous women to make the movie more than palatable. And that’s a quality I loved about Italian horror, especially the ’70s stuff.

The killer stalks these beautiful girls, as they mainly hang around this mansion atop the cliff that overlooks the town below. This sets up a really cool finale where the final girl, ankle broken, is trapped in the house trying to signal to the citizens far below. It’s an effective scene in the movie and it help builds up the tension and intensity of the story’s final moments.

All in all, Torso wasn’t a classic in the same vein as Argento and the elder Bava’s work. Although, some fans of this style of film do hold it in much higher regard than I do. That doesn’t mean their wrong, I just feel like this is pretty standard giallo fare. 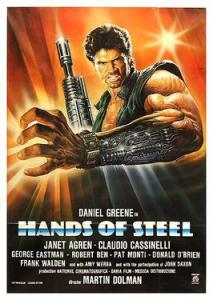 “When I get through with you, you’ll have to wipe your ass with your nose” – Raul Morales

This film had more international titles than it had extras!

But this film can have as many titles as it wants, as it is a pretty badass and ridiculous flick that has a plot that’s all over the map but doesn’t suffer because its supposed to be a smorgasbord of everything that made ’80s action movies so much fun.

This motion picture is insanely enjoyable and one of the best Italian post-apocalyptic, “knock off everything under the sun” movies.

There’s even a scene where the good cyborg has to arm wrestler a guy that looks like Bear Hugger from Punch-Out!! The insane part about this scene is that the loser gets their hand trapped in a shackle while a diamondback rattler bites them to death.

Now this is just about everything you’d expect from an Italian Mad Max wannabe but then it’s so much more. It’s part Terminator, part RoboCop, part Over the Top and 100 percent toxic masculinity. Plus, this came out before RoboCop and Over the Top, so it’s like the writer/director Sergio Martino was psychic. I mean, he ripped off something that didn’t yet exist!

Speaking of Martino, he’s a guy that directed a lot of the top Italian schlock. You know, the type of schlock that gives schlock a good name and inspires people like myself to find endearing things within movies that the general populace could never tolerate. He’s done giallo, slashers, spaghetti westerns, other post-apocalyptic movies and pretty much something in every cool sub-genre that matters to fans of grindhouse, exploitation, horror and action films.

Hands of Steel is a hell of a ride. It has pretty good, albeit hokey effects. But considering this picture’s budget, it’s all passable and it works. In fact, the scene where the cyborg repairs his arm is pretty impressive.

While I’m sure that most people would dismiss this movie as absolute shit, the opinions and money of the regular moviegoer are why we keep getting subpar blockbusters, countless sequels, spinoffs, remakes and reboots. I’ll take Hands of Steel over some Harley Quinn dressed like a peacock movie.