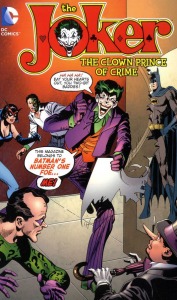 This book collects the mid-’70s Joker series, which ran for nine issues. The only story from this series that I had ever read was the one featuring the Creeper, which was also reprinted for the collection The Greatest Joker Stories Ever Told. It was cool finding this and being able to check out this classic series.

I think the thing that I enjoyed most about this is that it allowed the Joker to shine on his own without any involvement from Batman whatsoever. The Caped Crusader never appears and just when you think he does, it is a ruse by the Joker. Although, I’m not sure why he is on the cover, or the Riddler and Penguin for that matter, as none of these people appear in the book.

We do see the Joker interact with other famous DC Comics characters though.

There are stories that feature Two-Face, Green Arrow, Black Canary, Catwoman, Scarecrow, Lex Luthor, the Royal Flush Gang, Sherlock Holmes and a brief cameo by the Hal Jordan version of Green Lantern. Then there’s also that entertaining story with the Creeper.

Being that this is a Joker comic, it really plays up the comedy and is actually funny, even if it is chock-full of ’70s hokey cheese.

This is a nice time capsule back to the Bronze Age of comics before things started to evolve with the style by the mid-’80s.

This is also a must own if you are a big fan of the Joker and want to have a nice laugh at the expense of the other villains and heroes he toys with here.

Rating: 7.5/10
Pairs well with: The Greatest Joker Stories Ever Told