Catherine Mary Stewart had a massive year in 1984, between this picture and The Last Starfighter. Granted, this became more of a cult classic once it hit video store shelves unlike Starfighter, which did well in the theater and on video. In any event, Stewart was front and center in two great sci-fi films form that great year in cinema. I loved 1984 and its place in movie history and this picture is just one of many reasons why.

Night of the Comet also reunites Robert Beltran and Mary Woronov, who were two parts of the great trio from the cult classic comedy, Eating Raoul.

This is a zombie movie but it is also a teen comedy. Teen comedies were the best in the 1980s and the decade also gave us some real zombie classics. This was kind of like a perfect marriage of two genres that don’t traditionally go together. At least not back in 1984. In fact, this film would go on to inspire Joss Whedon in his creation of his most iconic character, Buffy Summers of Buffy the Vampire Slayer fame.

Catherine Mary Stewart and her onscreen sister, played by Kelli Maroney, were an awesome duo that kicked ass, carried machine guns and didn’t take any shit from anyone. Even when confronted by zombie stock boys in the mall, they never backed down. Granted, they got in over their heads, from time to time, but they survived to the end and even took out a crooked government agency in the process.

Robert Beltran was really good in this. He wasn’t the astute actor that he would become later but he was charismatic and kept the film moving forward in a lighthearted and witty way. I don’t think he gets enough credit for his contribution to this film, as most people love the two tough sisters that dominate the story.

This is a fun zombie movie and it shows a post-apocalyptic world as seen through the eyes of two teenage California girls. They compete for boys, go on shopping sprees and just want to have a good time even if 99 percent of the people around them have turned into red powder.

I love Night of the Comet. It has reached cult status but it still doesn’t get the overall recognition it deserves. It’s a film that is better than you’d expect it to be and there isn’t a whole lot one can pick apart. 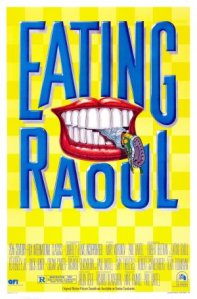 “Why don’t you go to bed, honey? I’ll bag the Nazi and straighten up.” – Paul Bland

Eating Raoul is the film where the team of Paul Bartel and Mary Woronov really cemented itself. While Bartel had directed before, this is his first real effort without the involvement of Roger Corman.

The film is, more or less, a black comedy that pokes fun at a lot of the cultural things that made up the 1980s. The free love movement has run its course, greed is everywhere and everyone is pretty much self-absorbed and blinded by their own desires.

The film follows the prudish Blands (played by Paul Bartel and Mary Woronov). They are in serious financial trouble and are also continually harassed and repulsed by the swingers that seem to be everywhere in their Hollywood apartment complex. After murdering a swinger who was trying to rape Mrs. Bland, the two discover he is loaded. They then devise a scheme to knock off swingers and to take their cash. This gets them mixed up with Raoul (Robert Beltran), a shady locksmith. Raoul gives the Blands money for the “cadavers” and they all three scheme to get rich, as Raoul has his eyes on Mrs. Bland. We get a whole lot of hilarious insanity, a love triangle and a high society swingers party that makes up a fantastic finale.

Eating Raoul is a film that is a lot smarter than it initially appears to be. Bartel and Richard Blackburn wrote a stupendous script, which was only enhanced by the talents of Bartel, Woronov and Beltran on the screen. While the stars aren’t comic veterans, at this point, they have the timing and the presence of more experienced players.

Eating Raoul is a film that is greater than what one would assume is the sum of its parts in 1982. It was a small comedy that would’ve normally just come and gone and disappeared forever but somehow, the true talent of Bartel and Woronov comes through and this thing was a surprising hit and has thus achieved cult classic status. There is even a Criterion Collection version of the film.