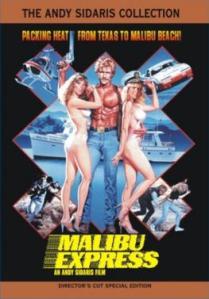 “Did you hear that she got raped this afternoon by two homosexuals? One held her down and the other one did her hair.” – Liza Chamberlain

I’ve wanted to watch Andy Sidaris’ movies for quite awhile, especially this one and Hard Ticket to Hawaii. Luckily, I found the entire collection of his twelve films on Amazon for nine bucks. Yes, nine bucks! It’s a fucking steal! Buy it!

Well, that is unless you don’t like goofy action comedies with Playboy Playmates, cool dudes with guns and fast cars, as well as crime stories littered with bumbling, idiot criminals.

These films also feature stunts, lots of vehicles and budgets so low that over-the-top special effects have to be crafted out of chicken shit and dirt.

Malibu Express may be the biggest budget film of the lot (adjusted for inflation) and it doesn’t fall victim to as minuscule of a budget as the other films that came later but it’s definitely not “big budget” and had to cut corners and trim unnecessary fat.

Sidaris and his crew still did the best with what they had and the look of the production is more akin to a moderately budgeted action TV series of the ’80s, as opposed to looking like something made for less than the cost of a small house in the Hollywood Hills.

I love the lead, Darby Hinton. I also love all the beautiful women that are often times devoid of clothes. Plus, this has Art Metrano in it. I only really know him as Mauser from the Police Academy movies but I’ve loved that guy my entire life. Add in Sybil Danning and this is a solid mix of fun talent in a fun movie that’s amusing and high octane.

Sure, this is low brow schlock that got shoved into drive-in theaters and budget movie houses but it’s also what I would call an ’80s VHS classic. And frankly, that makes this the type of action comedy I tend to love.

I can’t say that I was impressed by Malibu Express but I can say that it didn’t disappoint me or leave me with buyer’s remorse. It’s pretty much exactly what I thought it would be.

Rating: 6.25/10
Pairs well with: the other eleven films in Andy Sidaris’ Triple B Series, as well as the American films of Iranian director Amir Shervan.

In the 1970s, America loved its disaster movies. They also loved TV movies with big ensemble casts made up of the stars from various television shows. So green lighting SST Death Flight was a no brainer, right?

A lot of the disaster films of that era didn’t hold up well at all. Now I am not sure what people thought about SST Death Flight when it aired on ABC in early 1977 but it is a friggin’ turd.

I almost feel bad for most of the cast that is in this. Burgess Meredith deserves better and Lorne Greene has done his fair share of cheese but both men are pretty accomplished and respected and have a certain gravitas that puts them above a picture like this. I can’t fault Billy Crystal, he’s pretty damn young here and was looking for that big break.

70s celebrities seemed to love being in these big disaster ensembles though, and to be honest, despite the movie being terrible, it was probably a hell of a lot of fun to make and to hang out on the set with a bunch of really cool colleagues. I wouldn’t have said “no” to it, if I was in the same position.

SST Death Flight is unexciting, uninteresting and is just a cookie cutter plane in danger picture. This formula has been done to death and this movie offers nothing really new or captivating. In fact, it plays like more of a parody but without the clever jokes.

But you can watch it get riffed in the first pre-cable era season of Mystery Science Theater 3000. That version is currently streaming on YouTube.