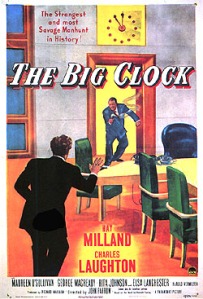 This is one of those noir films that many consider to be one of the top. I hadn’t seen it until now but I’m using the month of Noirvember to work through a lot of the films I’ve missed in the noir style.

Being that this stars Ray Milland also made me bump this one up on my list.

For the most part, this was pretty standard fare as far as noir pictures go. Milland gave it a little extra flourish, as did Elsa Lanchester in the few bits she was in.

I also thought that the setting was unique, especially how they used the big clock within the film itself. But this also used clocks as a motif throughout the entire picture. Which makes sense, as it was a race against time and it featured big business where time is money.

The story was decent but there wasn’t much in it that I found surprising. In fact, there really isn’t a mystery to solve or any shocking plot twists. The audience knows what’s happening and it is really just a journey about a man trying to clear his name and finger the true villain.

I thought that most of the film was just okay. The minutes before the big finale is where it actually kind of picks up. The story’s villain does end up dying a pretty terrible but fitting death and I did find that satisfying.

The Big Clock was solid and quite competent on nearly every level. It just didn’t tap into that dark, noir part of my brain as much as I would’ve liked.

Rating: 7/10
Pairs well with: other classic noir pictures like Nocturne, This Gun for Hire, Thieves’ Highway, Criss Cross, Trapped and Clash by Night. 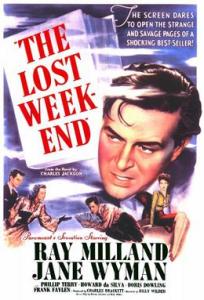 “It shrinks my liver, doesn’t it, Nat? It pickles my kidneys, yeah. But what it does it do to the mind? It tosses the sandbags overboard so the balloon can soar. Suddenly I’m above the ordinary. I’m competent. Extremely competent! I’m walking a tightrope over Niagara Falls. I’m one of the great ones. I’m Michaelangelo, molding the beard of Moses. I’m Van Gogh painting pure sunlight. I’m Horowitz, playing the Emperor Concerto. I’m John Barrymore before the movies got him by the throat. I’m Jesse James and his two brothers, all three of them. I’m W. Shakespeare. And out there it’s not Third Avenue any longer, it’s the Nile, Nat. The Nile and down into the barge of Cleopatra.” – Don Birnam

I watched The Lost Weekend, as it has been highly praised by a lot of the books I’ve read on film-noir. It also won four Academy Awards including Best Picture. I think the thing that really sold it to me, though, was that it is a noir directed by Billy Wilder, the man behind Double Indemnity and Sunset Boulevard. It also stars the great Ray Milland, who won an Academy Award for this role.

Now this isn’t a standard noir. It doesn’t feature criminals, innocent guys in over their head or a femme fatale. What it does feature is a remarkable actor playing a drunk writer, fighting his personal demons, trying to salvage his relationship with the love of his life and trying to get back to work without the demon bottle’s stranglehold over his very being.

The main reason why this film works so well is Milland’s performance. But I also have to give credit to some of the other players like Howard Da Silva and Phillip Terry. But it is Jane Wyman that really delights and who actually makes the romantic scenes flourish. She plays exceptionally well off of Milland and truly feels like his equal in the film.

I obviously can’t discount Billy Wilder’s direction. The man was a maestro behind the camera and he gave us a pretty fine tuned and fabulous looking motion picture.

While this is far from my favorite film-noir and it is only third on my list of Billy Wilder’s noir outings, it is still a solid movie that’s entertaining and a bit heartbreaking to watch at times, as Milland wears self-destruction so well.