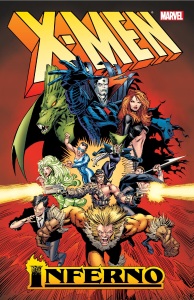 This was actually the first big X-Men crossover event that I ever read. Unfortunately for me back in 1988 and 1989, I wasn’t able to get every single issue in this massive event. But I do own them all now, so I wanted to revisit this huge story in its entirety.

It is really good but it also has some problems.

In regards to the positives, the writing is pretty solid. The bulk of this event is written by Chris Claremont and Louise Simonson with other writers contributing to some of the tie-ins. The art is also great, most of which is done by Marc Silvestri and Walter Simonson.

The story sees Mr. Sinister unleash literal Hell on Earth with many weapons at his disposal: Madelyne Prior, S’ym, the evil version of Polaris, the Marauders and the big bad demon, N’Astirh.

Sinister also finds ways to trick the X-Men and X-Factor into fighting amongst themselves and manipulates the stage to pit brothers Cyclops and Havok against each other.

There is a lot at stake here and it changes many of the characters going forward. One of my favorite characters, Magik, dies here. Granted, we all know she comes back because she’s basically a demon queen of the underworld but the weight of it is very heavy and at the time, we didn’t know if the young heroine could return.

This crossover also includes the New Mutants and the X-Terminators. The story serves to merge those two teen teams into one. This set the groundwork for what was to come once Rob Liefeld came into The New Mutants and gave us Cable, Deadpool and eventually, the hugely successful X-Force.

What I love about this story is that it merges superhero Marvel with fantasy Marvel. Like the Magik miniseries a few years earlier, this takes Marvel’s mutant heroes and makes them deal with fantastical and occult evil but on a much grander scale. Also, Mr. Sinister was damn cool in this period of X-history.

Looking at the negatives, my only real issue is that the story drags out in places. That could be due to me also reading all of the tie-ins apart from the main body of the central story. Some of it felt really unnecessary and it also felt poorly organized. The New Mutants issues were on the orbit of the main story but with the death of Magik and how that effected her brother Colossus, I feel like that should have happened within the framework of the stories actual main chapters.

Shaky narrative flow aside, this is still a better crossover event than what the Big Two comic book publishers give us in modern times.

Inferno was my first big crossover event. It’s not the best but it’s still a lot of fun and it came out in a time where the X-titles were at their absolute creative peak.

Rating: 8.5/10
Pairs well with: other big X-Men crossover events of the late ’80s and early ’90s like X-Tinction Agenda and X-Ecutioner’s Song.

This follows the major event in X-Men and Avengers lore that was House of M, which itself followed Avengers: Disassembled. While the Scarlet Witch is no longer the focal point here, the effects of what she did in the two previous stories is still felt and the central focus of this large crossover event’s plot. This is also an X-Men-centric story as it doesn’t crossover with Avengers characters or titles this time.

In a way this does a good job of closing out what some call the House of M trilogy but it also sets up an event that is a direct sequel to this called Second Coming.

The story is pretty good but it may be hard to follow for someone who just jumps in or for an old school X-Men fan that will be bombarded with a bunch of newer characters, as this came out when The New X-Men was going strong.

Overall, this is pretty good but the story jumps around a lot and if you don’t binge through it fairly quickly, you’ll probably forget some details. Also, some threads within the larger plot aren’t as great as others.

I didn’t care so much for the New X-Men Team and was more intrigued by what was going on with the main X-Men and the Marauders. Although, I had hoped that Mister Sinister would really get his moment to shine brightly and he’s just sort of there, leading the Marauders, and then he’s out of the story. Although, the twist that sees him taken out of the plot was pretty neat and it’s not something that I saw coming.

If you like classic X-Men, this more modern event will still probably resonate with you. It feels more like a ’90s X-Men event than something made within the last decade or so. 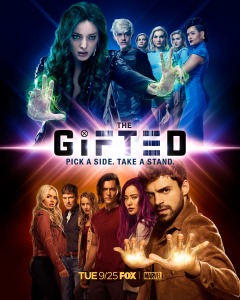 I’m way behind on a lot of shows, especially the superhero stuff but I finally got around to checking out the first season of The Gifted.

This takes place in the X-Men cinematic universe but at the same time it doesn’t. What I mean by that is that this all happens in a different timeline, where the X-Men have essentially vanished and left some young mutants in charge of a group called the Mutant Underground.

The show centers around Stephen Moyer a.k.a. Vampire Bill from True Blood and his family. His two teenage kids are mutants and they are on the run from the Sentinel Services agency and later, Trask Industries.

The only really well known X-Men characters in this are Polaris, Thunderbird and Blink. Other than that, there are some minor comic book characters that show up but the majority of the main cast is comprised of new mutants and thus, this show has more creative freedom.

While this show does do a good job of filling out it’s pocket universe, it doesn’t necessarily feel like the X-Men films that most of us know and love. But it also doesn’t feel like other comic book television shows that are currently on the air. This definitely has a different vibe than the CW DC programs or the Netflix Marvel ones. This is also more family friendly than the harder stuff out there like Gotham.

The first season told a really good story that came to a satisfying conclusion that actually made me want to jump right in to season two, as it leaves off on a bit of a cliffhanger due to the non-heroic actions of one of the main heroes.

This started out a bit shaky for me though. But being that it was only thirteen episodes, I stuck with it and I’m glad I did. It found it’s footing faster than most other comic book TV series and it got really solid over the back half of the season.

I especially loved Garret Dillahunt in this and as his character’s motivations become more clear, the threat gets a lot more serious for the heroes.

All in all, I was pretty happy with season one and gladly anticipate what season two has to offer.