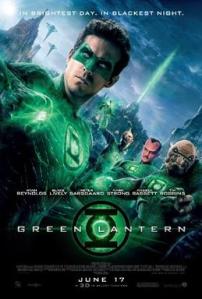 Man, I had high hopes for this film when it was coming out. Although, I thought Ryan Reynolds was a poor choice, despite liking him in general. He’s just not the Hal Jordan type and luckily he found his superhero calling once he started making Deadpool movies. I’m ignoring his first outing as Deadpool in that Wolverine movie though, as that was atrocious beyond atrociousness.

Anyway, this film was a supreme dud. It could’ve been great, especially coming off of the heels of how great the Geoff Johns run was in the Green Lantern comics just before this movie. Also, this had an incredible cast apart from the Reynolds misfire.

I think my hopes were also high due to how well the Marvel Cinematic Universe movies were in those first few years. But I guess the filmmakers behind this didn’t learn the lessons from the bad comic book adaptations, as they took the villain Parallax and essentially made him a giant fucking cloud like Galactus in the laughably awful Fantastic Four: Rise of the Silver Surfer.

For positives, I liked what they were doing with Hector Hammond and I also liked the world building they did with the Green Lantern Corps. I also liked most of the people in the film but they should’ve used Sinestro more, especially with Mark Strong in the role. They also sort of wasted Tim Robbins and Angela Bassett without giving them more and better material to work with.

The special effects were pretty terrible. There are some good effects moments but the film looks overly cartoon-y and the Oa scenes felt more like a Pixar movie than anything I could try and attach to any sort of reality.

I guess the biggest disappointment out of this was that it was directed by Martin Campbell, who did two of my favorite James Bond movies: GoldenEye and Casino Royale.