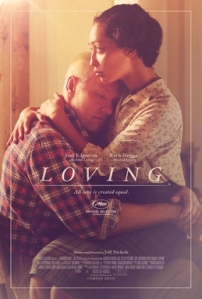 I really wanted to get around to seeing Loving before the Academy Awards. Ruth Negga was nominated for Best Actress for the film and I have been a fan of her work since first discovering her on the great British television show Misfits. People really need to watch Misfits; I think it is still available on Hulu.

The film is also the first time that I had seen Nick Kroll shed his comedy shtick and try something serious. Kroll did great, by the way.

Loving is the true story of the Loving family and how their interracial marriage caused them a lot of problems in Virginia in 1958, as well as after. It follows their story of love and showcases the challenges that they face. In the end, their situation led to a Supreme Court decision that prevented any sort of legal troubles for interracial couples that marry.

The acting in the film was superb and Negga really takes things to another level, especially in the latter half of the film. Joel Edgerton was solid but he is usually pretty good. Michael Shannon has a small role as a photographer but he is also really impactful.

The focal point of the movie is the relationship between the Lovings. They support each other, they carry each other and ultimately, their bond is tested but only gets stronger.

Loving is a good movie about an important story that needed to be told. I wouldn’t consider it to be a great picture but it features a really strong display of acting prowess from its stellar cast.