While the first season of The World According to Jeff Goldblum isn’t done streaming yet, I didn’t want to wait too long to review it, as it was part of Disney+’s launch two months ago.

Plus, I get the gist of it enough to review it at this point.

The show stars Jeff Goldblum, who also is an executive producer. It’s made by National Geographic and I’m not sure if it was originally intended to be broadcast on Disney+ or if that became part of National Geographic’s deal with the service after production had started.

Needless to say, Goldblum has found a home at Disney, especially after captivating fans with his performance in Disney/Marvel’s Thor: Ragnarok.

Goldblum’s special charm, charisma and unique panache is on full display in this show, as he dives into different things that are all a part of Americana. He looks at sneakers, barbecue, cycling, ice cream, tattoos, denim and more.

What makes the show kind of cool, other than it being hosted by Goldblum, is that he didn’t study up on anything and pretty much deep dives into these things blindly and with just the knowledge from his own personal experiences.

I don’t think that this is a show that’s going to make or break Disney+ but Jeff Goldblum really gives it his all and entertains while informing the viewer. It’s a cool show that’s charming and amusing with a host whose energy and curiosity are infectious. 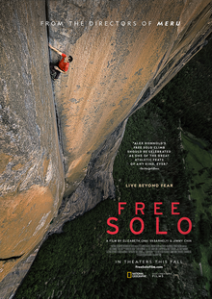 Since this film won the Academy Award, I thought I’d check it out.

It follows Alex Honnold a free solo climber as he attempts to scale El Capitan in Yosemite National Park. While we do get to see his big attempt at scaling the massive rock face, the documentary focuses more on the life of a climber than the feat itself.

Free Solo delves into the special sort of insanity that a free solo climber has. In Alex’s case, he doesn’t have time for love or a life that in any way distracts from his goals. However, by the start of this film, Alex now has a girlfriend and the movie analyzes their relationship and how it effects (or doesn’t effect) Alex in preparing for his big climb.

The documentary is definitely engaging and it is superbly shot, capturing the majestic beauty of El Capitan in all its glory.

But in the end, it just makes me question the subject’s sanity and what propels his mania.

I wouldn’t call this a documentary of the year or anything but it was an entertaining way to spend 100 minutes. But I’m more intrigued by the mind of the man than the accomplishments of the man.

Last night I watched the series debut of StarTalk, a TV version of astrophysicist Neil deGrasse Tyson’s popular podcast of the same name.

For those who know me, you know I am a big fan of Neil deGrasse Tyson and have read all his books, watched just about all of his television specials and listen to his StarTalk podcast regularly. I have to admit, I still haven’t watched his version of Cosmos because I still find Carl Sagan’s original version to be perfection – even if it is now outdated.

Nat Geo decided to take Tyson’s podcast and make it into what they describe as a “late night talk show”. Having now watched it, I don’t really think it fits that category and it is bad marketing on their part. Sure, Tyson does interviews with celebrity guests but based off of the first episode, the interviews are prerecorded and shown in clips throughout the show as he and a few panelists discuss the interview. It’s not really a late night talk show format and is more of an interview recap show. Going forward, StarTalk would benefit from having guests actually appear on the set for a sit down interview à la The Tonight Show.

The content of the first episode was a bit weak. George Takei of Star Trek was the first celebrity guest for this inaugural episode and while it was a good interview, the show itself expanded into talking about the science of Star Trek and what is plausible and what isn’t with the knowledge we have today. While an interesting topic to some degree, it has already been done to death on multiple science shows across multiple networks. Additionally, there are countless books on the subject. I feel that for this show’s first outing, the subject matter should have wowed the audience. Give us your best foot forward and not a rehash of something that has already been debated more times than I care to count.

On the positive side, Tyson is a charismatic individual and the perfect successor to Carl Sagan’s throne of being the face and voice of astrophysics. He can explain complex things simply and has a knack for solid communication and a great sense of humor.

Neil deGrasse Tyson truly is the “star” in StarTalk. Without him however, the show would just be an average science show that would probably fail to engage audiences in the long run. Hopefully it is going to improve with time.