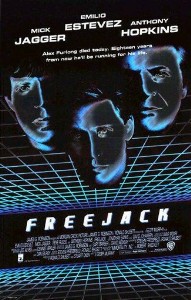 “Get the meat.” – Victor Vacendak

Freejack isn’t a good movie but it’s one of those cool ’90s action, sci-fi flicks that just hits the right notes for me. But you probably need to be a fan of these sort of films for this one to resonate.

It has a very Philip K. Dick style to it in plot and visual flourish.

I guess the coolest thing about the movie is that this has a really cool ensemble cast that features two rock and roll legends: Mick Jagger and David Johansen. But it also stars Emilio Estevez, Anthony Hopkins, Rene Russo, Jonathan Banks, Frankie Faison and the seemingly underappreciated Esai Morales.

Estevez stars as a Formula 1 driver that dies in a pretty spectacular crash. However, his body is plucked away just before the moment of death and he wakes up in the future, confused, lost and distraught. He is also being hunted by Mick Jagger and his posse, as Jagger has been tasked with capturing Estevez so that some rich guy can steal his body by uploading his brain into it.

The movie follows Emilio on the run where he finds out that he can’t trust any of his old friends. Overall, the film is action packed, high octane and balls out fun.

The chase sequence with Emilio driving a champagne delivery truck with Jagger following in a SWAT tank is pretty damn good. It’s accented by the great and booming score by Trevor Jones, who also provided good scores for The Last of the Mohicans, Labyrinth, The Dark Crystal, Cliffhanger, From Hell and Dark City.

For me the real highlight was Mick Jagger. The guy looked like he was having a great time filming this movie. Now I don’t know if he actually had fun but he certainly looked to be eating this film up. But the guy has infinite levels of charisma and he was entertaining as hell in this.

Anthony Hopkins, on the other hand, felt like he was dialing in his performance. He later went on to bash this film and maybe he had a sour taste for it when he was still making it.

All in all, this was actually better than I remembered. In fact, I wasn’t too enthused to revisit it but I wanted to watch something in this film’s style. I’m just glad that I was pleasantly surprised by it.

Rating: 6.25/10
Pairs well with: the original Total Recall, The 6th Day and Timecop.