“Eyes! Lungs! Pancreas! So many snacks, so little time!” – Venom

If I’m being completely honest, my hopes for this film weren’t too high. However, my minimal expectations were exceeded in a lot of ways.

I guess the acting prowess of Tom Hardy, Michelle Williams and Riz Ahmed can go a log way as all three were pretty damn good in this. Hardy really takes the cake though and even if his Eddie Brock differs a lot from the comic book version, I still liked this interpretation of the character. I kind off miss the blonde boxy buzz cut but that’d probably look silly in 2018… or just too f’n badass!

Anyway, this film had to create its own story, as they didn’t have Spider-Man at their disposal to tell the story the right way. Plus, even though this is put out by the same studio that owns the Spider-Man film rights, it’s not really clear if this even exists in the same universe. There are no signs to the larger Marvel Cinematic Universe; none that I saw, anyway.

I liked this film’s plot though and the way that Venom comes to be, worked for me. I wasn’t too keen on Riot being the big bad of the movie but there wasn’t a whole lot they could do being that this was a self-contained movie that doesn’t seem to bleed over into the larger Spider-Man world. Plus, this takes place in San Francisco, as opposed to New York City, which could also have been a way to distance it from Spidey (and his friends and allies), at least for now. There are other symbiotes in this that aren’t just Riot, however. But he’s the only one that actually matters to the larger story.

My one big complaint about the film is the pacing. The first half hour moves at a crawl but once things get going, it really gets going. But then it moves almost too fast. From what I understand, there was a lot of footage cut from this movie. It was initially being made to have an R rating but very late in production, they decided to go with a PG-13 rating. There are moments where it seems as if something violent was lobbed off and it created some bad, choppy edits. Also, it feels as if some key narrative moments were worked out of the plot, after the film was fully shot. Like I said, it starts at a slower pace and then speeds up very quickly and it just feels like there are some time jumps and key things missing. Maybe this can be rectified with an R rated cut or an extended edition once this hits the streaming market.

I thought that the action sequences were a mixed bag. The first big one, which sees Brock on a motorcycle trying to evade big SUVs through the late night streets of San Francisco was superbly done, even if it threw a tiny bit of cheese at you. The final battle between Venom and Riot on the launching pad wasn’t so good. I mean, I’ve seen much worse in comic book movie finales but it was just a CGI shit festival and hard to differentiate between the two aliens. Couldn’t Riot have been a different color than dark grey? In the comic books, symbiotes have lots of color variations. Also, it would have helped if Venom had his iconic emblem on his chest and back.

One thing that stood out for me was the score. Often times it was subtle and atmospheric and then in big action scenes it would become a nice punctuation to the over the top adrenaline rush. The score during the motorcycle chase was stellar and it reminded me of the blockbuster scores of the ’80s to mid-’90s.

Venom is far from perfect but it’s got a lot more going for it than against it. Most importantly, it has my favorite mid-credits scene out of any of these comic book movies. It was chilling, generated the right kind of emotion in me and it made me want the follow up now, as opposed to three years down the road. If you’ve read the earliest Venom stories back when they were new, you’ll probably feel the same sense of awe when you get to this moment at the end of the film.

While this might not be as good as most of the movies in the MCU, it is more fun than most of them and to me, that’s really important. 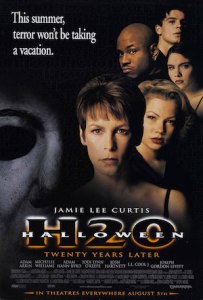 “Mom, I am not responsible for you. That’s it, I’ve had enough. I can’t take it anymore mom. He’s dead. Michael Myers is dead.” – John

When this film came out, I didn’t even want to see it. It looked awful, I assumed it was awful and when I did see it on video, a year later, I was left unimpressed. However, my tune has changed somewhat, seeing it almost twenty years later.

It isn’t wholly awful and in fact, it has some pretty strong positives.

On the negative end of the spectrum, the opening segment is decent but then the film drags and drags until you finally get to see Michael Myers hunt down his sister. You don’t really get some good Myers action until the last twenty minutes or so of the picture.

Then there is the issues with the Myers action itself. That issue being that half the killing, if not most of it, happens off screen. The majority of the film shows people getting cornered and then it cuts away. A few minutes later, someone stumbles across their dead friend. I assumed this had to be rated PG-13 but nope, it has an R rating but apparently no balls. Strangely, even though it cuts away from real violence and gore, the film is capped off with a decapitation that is actually shown. The way violence is handled in this movie is really friggin’ baffling.

Also, there are just so many bullshit jump scares that it was more irritating than surprising.

The cast in this is also pretty weak. There are really well-known stars in the film but this was before most of them broke out. Michelle Williams would go on to be nominated for four Academy Awards and receive lots of other awards nominations but in this, she’s just teenie bopper eye candy. LL Cool J didn’t seem to have much to do and Josh Hartnett didn’t serve much of a purpose other than being the son of Laurie Strode (Curtis) and giving her a reason to finally hunt down Michael Myers herself.

But lets get to the positives.

Jamie Lee Curtis kills it in this. This is her best outing as Laurie Strode and twenty years later, she finally gets that Ellen Ripley moment, where she has had enough, grabs a weapon and hunts the hunter trying to kill her and her child. The final showdown between her and Myers is absolutely fantastic and it is the best final battle out of any Halloween film. She truly was Michael’s match in this and it was damn cool to see. It actually makes up for the boredom I felt for the first two-thirds of the picture.

Also, we get a nice cameo from Janet Leigh, Jamie Lee Curtis’ real life mother. She’s even got a car like the one from Psycho.

Halloween H20 may have an incredibly stupid name and fall victim to being a standard 1990s slasher, lacking the gravitas of the films from the previous two decades, but that final act is stellar. The moment where Laurie and Michael come face-to-face for the first time in twenty years is actually chilling. I wish they wouldn’t have wasted that shot by putting it in the trailer.

So I no longer have a severe dislike of this film, I actually like it a lot. Especially the final moment between Laurie and her murderous brother. 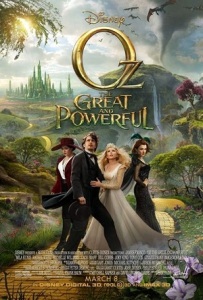 Being a fan of Walt Disney in general and a fan of L. Frank Baum’s Oz books, I figured I would check this film out. I wasn’t keen on Disney’s live-action Alice In Wonderland, a few years prior, but considering that this had a pretty decent cast and a different director, I gave it a shot. Besides, Walt Disney made magic with 1985’s Return to Oz, which is still one of the best, if not the best, interpretations of Baum’s work. Also, that film still has a level of creepiness to it that makes it just as unsettling as an adult, as it was when I first saw it as a child.

As far as this film goes, I’m really on the fence. There were scenes and sequences in the movie that were incredibly well done and parts where the writing was superb. Then it would quickly go the other way and give you situations that were beyond ridiculous, even for a CGI fairytale, as well as a huge level of confusion over the characters motivations and evolution throughout the film.

Michelle Williams and Rachel Weisz were pretty good in their roles. James Franco was decent but really grew into the role and took charge in the final act of the film. Zach Braff was great as Oz’s assistant in the prologue to the film and as the voice of Finley the flying monkey, a character that one could almost consider beloved had he had more screen time and had he been developed a bit more.

The biggest negative of this film was Mila Kunis. I found this surprising, as I usually like her in most things. However, her transformation to the Wicked Witch of the West was poorly done and her acting in the role went from completely uninteresting and vanilla to so over the top that she became cringe worthy every time she came on the screen.

A special shout out goes to Bill Cobbs, Tony Cox and Bruce Campbell. All three did great in their minimal roles. In Campbell’s case, it was really just a cameo.

The special effects weren’t great and the green screen work in many scenes was pretty deplorable. The evil flying monkeys looked odd and the world of Oz was too fantastical. Yes, it’s a fairytale but the world felt like a crude coloring book done by an angry three year-old who only had four crayons. It was like looking at some bad child art hanging up in a Pizza Hut.

The final battle, if you could call it that, was the highlight of the film and it really showcased the creative ability of director Sam Raimi. He and the writers found a great way to solve the problem of a mere mortal taking on two powerful wicked witches. The final act of the film was the best and it left me feeling some level of appreciation for what I spent two hours of my time watching.

All that being said, I would rather play the Temple Run game based off of this film than ever watch this movie again. In fact, that game is really what motivated me to finally watch this film a few years after its release.