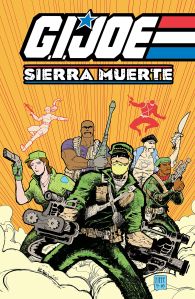 I remember when this book was coming out, people online were trashing the art. I thought that some of the people behind the comments just didn’t know who Michel Fiffe was and hadn’t seen his work elsewhere but honestly, I can’t say that the criticisms were wrong.

You see, this is a G.I. Joe comic book. It is a licensed property that IDW Publishing pays a lot of money for in order to create content for the Hasbro owned toy brand in the comic book medium. This is the most important factor in why my criticism of this miniseries is about to turn really f’n harsh.

To put it bluntly, Fiffe’s art style isn’t for everyone and that’s the real problem. It’s like IDW got an indie artist with a unique style and thought that this would somehow sell G.I. Joe comics. Well, G.I. Joe comics haven’t sold well in years, so I’m not sure what made IDW think that bringing in an artist with a non-traditional style would somehow appeal to more people than the few they’re actually selling these G.I. Joe books to.

If you are paying a lot of money for the rights to publish a brand you don’t own, don’t you want that brand to make you the most money as possible in order to get a return on your licensing fees, as well as making a boatload of profit? If the answer is “no”, then why the fuck are you a business? If the answer is “yes”, then why the fuck wouldn’t you put out a product tailored to appeal to the largest audience possible?

Furthermore, do you understand the G.I. Joe brand that you are paying all this money for? I’d say “no”, as your helping to kill it off permanently between this miniseries, Paul Allor’s current series and all that Aubrey Sitterson crap from two years ago. Hell, even the regular series that Larry Hama is still working on feels like it’s an afterthought and aimless, pointless schlock that’s so far removed from the spirit of the series, it can’t find its way back. But I don’t blame Hama, the dude’s been writing G.I. Joe for almost forty years.

Point being, this absolutely does not look the way a G.I. Joe comic book should look. Do you even know who the audience for this franchise is? Do you care? Or is everything you do a tax write-off since your company has been losing its ass for a few years now.

But none of this is to knock on Michel Fiffe’s personal art style. It’s just not the right style for a brand that is beloved by adults, many former veterans, that want their Joes to be badass and always look badass.

I should probably also mention that the story here felt rushed and wasn’t very coherent. This probably needed more than three issues to tell its story or it needed to be a smaller story without so many characters shoehorned into it.

I’m pretty sure IDW is mostly dead, at this point. Well, except for the money Marvel’s throwing them to keep them afloat and printing their D-level titles.

But if anyone from Hasbro is out there, what the fuck, guys? I want this brand to be as great as it once was and it has a rich enough mythos and backlog of stories and superb characters to always have something to say. I just wish the people that owned G.I. Joe gave a shit about it as much as the fans that still exist do.

Rating: 3/10
Pairs well with: other post-Chuck Dixon/Mike Costa era G.I. Joe comics put out by IDW i.e. the shitty ones.