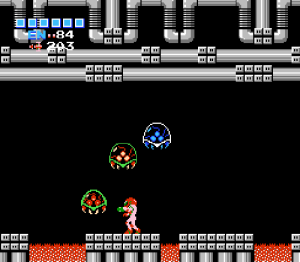 When people talk about bonafide NES classics, Metroid is always near the top of everyone’s list and rightfully so. It’s a superb, lengthy game in an era where lengthy games didn’t really exist. In fact, this one was so lengthy that it needed a code system to allow players to pick up where they left off.

Back in 1987, this took my cousin Billy and I a few months to crack. Granted, we were also eight years-old, at the time, and had to go to elementary school full-time. We didn’t have the luxury of modern gamers, plucking away for days and days, calling off shifts at work because the obsession is more important than responsibility.

This game still plays well, especially for those of us who never quite quit playing classic Nintendo titles.

It’s fun, it’s hard and it has one of the most kick ass soundtracks of its era.

The game also spawned a franchise with many solid sequels. However, this one is still the greatest of them all, in my opinion. I never had a Super Nintendo, so I didn’t spend too much time playing Super Metroid and the Gameboy’s Metroid II was also fantastic but this one takes the cake, as far as I’m concerned.

But maybe I’ll give Super Metroid a playthrough in the near future.

Rating: 9/10
Pairs well with: other side scrolling action games for the classic Nintendo, which narrows it down to about 8 dozen games.