I’ve definitely been digging the wrestling biographies I’ve recently gotten from Scott Teal’s website, Crowbar Press. This one is just the latest of those books that I’ve read but it lives up to the quality I’ve come to expect from the publisher.

The Assassin primarily wrestled before my time but I did get to catch the tail end of his work when I was really young. Also, he spent some time in Florida, where I grew up and still live. Because of that, I love reading books that are tied to that specific wrestling territory.

This was thoroughly enjoyable from cover-to-cover and I even liked all the stuff about his youth and growing up, as he had some issues and felt as if he needed to leave his small town behind and follow his older brother into the professional wrestling business.

I wasn’t sure what to expect going into this book, as I honestly didn’t know much about the man other than his in-ring character and all that knowledge came later, as I was a wrestling tape trader in the ’90s and early ’00s.

Like everything I’ve read from Crowbar Press, this did not disappoint and it’s a cool book for anyone that’s a fan of the old territory era of the professional wrestling business.

Rating: 7.5/10
Pairs well with: other books on the history of the old school territory wrestling business, as well as biographies on the personalities who lived it.

This is another historical wrestling reference book by Mark James.

By it’s title you can probably gather that it focuses on the Memphis territory. While it has an introduction written by James, the rest of the book is just pages of newspaper clippings about each Monday night wrestling show held in Memphis from 1957 through 1989.

While it is fantastic that it gives the entire history of Memphis’ Monday night cards, I kind of wish that there was more information given throughout the book.

This is definitely something worth looking at, though, if you’re a fan of wrestling history, especially Memphis.

This lets you see, from week-to-week, which wrestlers were featured, who came into the territory and where they fit on the card.

Rating: 7/10
Pairs well with: other books on Memphis wrestling, as well as books by Mark James.

I’ve heard good things about this book series from several of the people on the old school wrestling podcasts I listen to regularly.

That being said, I really wanted to check this one out first, as I’m a massive fan of old school tag team wrestling because it’s an art that seems lost in the modern era and because so many of the legendary tag teams were just too cool for f’n school.

This does a great job of providing mini-biographies on the greatest teams the sport of wrestling has ever seen up to the early ’00s. It covers all the different eras going back to the beginning of tag team wrestling.

The book is well organized, well researched and it discusses the teams and the wrestling stars with great care.

All in all, this was a thoroughly enjoyable read and I especially liked it because I don’t think tag teams get enough love.

Rating: 8/10
Pairs well with: other books from this series, as well as other historical wrestling books.

To say that “Dr. D” David Schultz is one of the most interesting guys that ever worked in the wrestling business might be an understatement. He’s most famous for being infamous but he also got pushed out of the career he loved and became one of the most famous bounty hunters in the United States.

His most famous act, still to this day, was slapping 20/20‘s John Stossel back in December of 1984 at Madison Square Garden. It’s the incident that changed his life and set him on a different career path outside of professional wrestling.

Schultz is much more complex and a lot more interesting than just being the cantankerous heel that hit a reporter, though. He’s actually a pretty badass dude, legitimately.

He was known as one of the toughest wrestlers in the locker room and he would go on to have a great career as a bounty hunter where he actually used that job to try and help those on the wrong side of the law. Despite his legendary reputation as a heel, David Schultz has actually helped people turn their lives around, whether just checking up on them or helping them escape very bad people.

This book tells Schultz’s story in his own words and man, it’s compelling stuff and, hands down, one of the best wrestler biographies I have ever read.

The first half of the book covers Schultz’s youth and wrestling career while the second half takes you through his bounty hunting career. Even though I bought this for the wrestling stories, I found the bounty hunting stories to be much more intriguing and captivating. The guy has lived one hell of a life.

Don’t Call Me Fake is incredible and I don’t know why this hasn’t been made into a movie yet.

Rating: 9.5/10
Pairs well with: other biographies and historical books written about old school wrestling from the territory era. 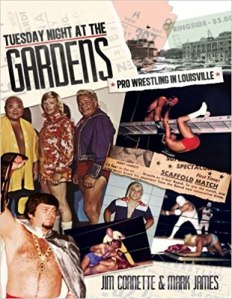 I was glad that I picked this book up from Jim Cornette’s website before he had to shut it down multiple times due to being overwhelmed by people like me buying up all his great old school wrestling goods.

What’s really cool about this book is that it is written by Jim Cornette, along with Mark James, who is one of the premiere wrestling historians, especially in regards to the old territory era.

Cornette grew up in Louisville and it’s where he first fell in love with the wrestling business. His passion and love really comes out in this, as he walks the reader through professional wrestling history in the Louisville area.

He goes into Louisville’s ties with Memphis wrestling, the stars that used to come through his hometown and all the major angles and developments that shaped the business during that great era.

For fans of old school territory wrestling, this is an immensely informative and entertaining read.

Rating: 7/10
Pairs well with: other books on the history of territory wrestling. Primarily those by either Mark James or Scott Teal.

Taken from Arcadian Vanguard’s YouTube description: The 6:05 Superpodcast takes a special look at the life and career of the legendary Harley Race! 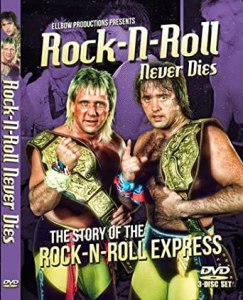 Watching this documentary, it kind of dawned on my that I have seen the Rock-n-Roll Express wrestle live and in person over five consecutive decades. I saw them in the ’80s, ’90s, ’00s, ’10s and the ’20s after recently seeing them at NWA Hard Times back in January before this COVID spectacle put the dead stop halt on Planet Earth.

While they’ve never been my all-time favorite tag team, they are certainly pretty high up on my list and have my respect for their contributions and longevity in the wrestling business. Hell, these guys can still go and they’ve proved that the two most recent times where I was able to see them.

So I was pretty stoked when I got this three disc set, which featured the documentary I’m now reviewing, as well as two other discs packed full of bonus material, interviews and matches.

As far as the documentary goes, it was a good, solid piece that covered these guys’ long and storied careers. It even goes back to the time before they were a team, showing how each man developed their style and how they eventually came together, forever changing the business and the tag team landscape.

So many other great teams have been inspired by the pairing of Ricky Morton and Robert Gibson and their effect is still felt today, even with the younger generation of wrestlers we have now, who are two-to-three generations removed from the height of the Rock-n-Roll Express’ career.

The best part about this piece, is hearing the stories that Ricky and Robert got to share about their history, as well as their takes on the business then and now.

Rating: 7/10
Pairs well with: other wrestling documentaries by EllBoy Productions and put out by Highspots.