“I swear, I don’t know nothin’! I swear before God and eight motherfuckin’ white people!” – Chaney

The original Oldboy might be my favorite South Korean film of all-time. Its director, Park Chan-wook made an almost flawless film. It was an instant classic, has stood the test of time and become more than just a cult film in the United States and around the world.

Spike Lee is one of my favorite directors. I’ve been a fan since seeing Do The Right Thing as a kid. He’s got a unique visual style and a great gift for storytelling. While I respect his work, I’m a bit puzzled as to why he wanted to remake Oldboy, as it was pretty unnecessary.

I guess Hollywood always wants English language versions of foreign hits but the fact that Spike Lee stepped up is a bit strange. Although, the combination of Lee’s skill and style mixed with this violent Asian tale motivated me to check it out.

I’ve heard this film being slammed by many critics and fans of the original. I get it, as some things should be sacred and all that. However, after seeing the film, I think a lot of the bitching is just bitching for the sake of bitching. This film is not as good as the original but looking at it as a completely separate entity, it’s still a pretty good film.

Josh Brolin was fantastic, as he usually is. On top of that, Elizabeth Olsen and Samuel Jackson were really good. I also enjoyed the performances of Michael Imperioli and Sharlto Copley. Max Casella even shows up for a bit.

Action-wise, the epic fight from the first film was recreated but not as well. It was still a damn good sequence all on its own but if we are going to compare them, the original was superior. Again, the original, as a whole, was a superior film.

The cinematography in this movie was beautiful. Spike Lee and his art department really did their job in creating specific emotional vibes from scene-to-scene. The “hotel room” was eerie and haunting and really became its own character within the film.

If you were to see this film without being a big fan of the original, you’d probably enjoy it more. It’s not as bad as people say and Spike Lee did some great work, fattening his already amazing portfolio.

But again, after seeing it, I still have to question why this remake was necessary. And in retrospect, this was a project destined to piss off fans and critics alike. 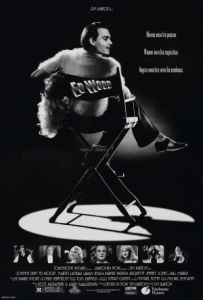 “Visions are worth fighting for. Why spend your life making someone else’s dreams?” – Orson Welles

Ed Wood is a magnificent film. It is also the greatest thing Tim Burton has ever directed, which says a lot considering his massive body of work. I have also never enjoyed Johnny Depp and Martin Landau more. Additionally, the film features one of the best roles of Bill Murray’s career.

Shot in black and white, to mimic the time that Edward D. Wood Jr. lived in and the films he made, Ed Wood boasts some fantastic cinematography. It doesn’t just feel like a period piece shot in black and white as a gimmick, it actually has warmth, depth and is a character itself, within the film. It gives the movie a perfect tone and it is also matches up to the actual filmmaking work of Ed Wood, the director. When we see scenes being filmed for Plan 9 From Outer Space, Bride of the Monster and Glen or Glenda?, Tim Burton’s sets and visual tone match those films pretty flawlessly.

Martin Landau won the Oscar for Best Supporting Actor for his role in Ed Wood, as horror legend Bela Lugosi. It was a fantastic performance and the best of Landau’s storied career. While it was great seeing him recognized and this film as well, I feel like it was deserving of other nominations. It did also win for makeup, the only other category it was nominated for.

Everyone in the cast, top to bottom, gave some of the best performances of their careers. Johnny Depp was absolutely captivating and charismatic as the title character. He brought real life to the legendary persona of Wood. He connected with the audience, as well as long-time Wood fans and gave an exciting identity and character to the maestro of bad cinema. He was sympathetic and you wanted nothing more than for Wood to succeed, despite the odds being stacked against him and the limitations of his abilities. Depp’s Wood had passion and heart.

Bill Murray plays Wood’s friend, a transvestite wanting to be transsexual named Bunny Breckinridge. Breckinridge was a collaborator with Wood and played a role in his most famous film Plan 9 From Outer Space. Murray did a fine job with the part, committed to Bunny’s flamboyant personality and strong desire to become a woman. This is my favorite of Murray’s more serious roles. Granted, he still brings an element of comedy but this is the first real dramatic role I remember seeing him play. He had panache and delivered his dialogue brilliantly.

Jeffrey Jones was a perfect casting choice for the psychic conman Criswell. He looked the part, acted the part and conveyed him as a real showman. Sarah Jessica Parker and Patricia Arquette both did good as the leading ladies: Parker for the first half of the film, Arquette for the latter. For the role of Tor Johnson, there really was no better choice than George “The Animal” Steele. Lisa Marie was a good Vampira and Max Casella was a nice addition to the cast, as he is a really good actor that I feel is still underutilized. Lastly, Juliet Landau plays a small role but she really nails it. She was quirky, smart and pretty mesmerizing.

Ed Wood is a film about imagination and creation. It is also about passion. While this is a very romanticized version of the director’s life and work, it makes one want to be a dreamer and to follow those dreams, despite the world standing in the way. It also shows Wood’s struggles with his identity and who he is and how it should be okay to embrace who you are and not be scrutinized for it. While Wood wasn’t a great filmmaker, he was still a man ahead of his time. Ed Wood, the man, shows that you can have artistic and creative brilliance, even if it isn’t executed in the best way. He is a hero for those with a creative intelligence that have a hard time cultivating it into something spectacular.

This is a great period piece and a stupendous showbiz biopic. It was some of the best work of every talented person involved in the picture. Ed Wood is a true classic and a perfect homage to the man, his life and his work. And frankly, it is one of my favorite films of all-time.