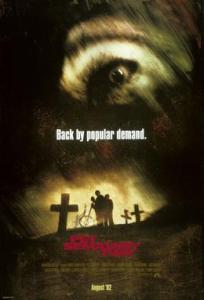 “No Brain, no pain… think about it.” – Gus Gilbert

While this isn’t as good as the first film, which I do see as fairly overrated, I did enjoy watching this one a bit more. I think a lot of that had to do with this movie being batshit crazy, though.

First off, Clancy Brown makes this entire film work for me. He’s absolutely great in this, completely committed to his role and elevates this picture much more than it deserves to be. While this isn’t on any all-time best horror film lists, his performance here should definitely be considered for lists about monsters or horror villains. He’s simply great and even if he knows he’s in a mostly shitty film, he certainly isn’t phoning it in. Brown makes you believe he is an insane, undead, dickhead sheriff with so much enthusiasm, you can’t deny that the guy is a master of his craft.

The film also stars Edward Furlong, coming fresh off of his film debut in Terminator 2: Judgment Day, as well as Anthony Edwards, who will always be Gilbert from Revenge of the Nerds to me, and Jared Rushton, most known as the best friend of Tom Hanks in Big.

This doesn’t feature any returning characters from the first film, even though it takes place in the same town and there are mentions of the characters in subtle ways throughout the movie. What’s weird though, is that this one wasn’t filmed in Maine like its predecessor and was instead filmed in rural Georgia. So the landscape has a different look to it. There are still lots of trees but everything has a different visual feel.

Furlong is the main character and the movie starts with him witnessing his actress mother get electrocuted to death on a horror movie set. He and his veterinarian dad move to this small town. He then draws the ire of the school bully, befriends the fat kid with the mean cop stepdad and then later learns about the “pet sematary” off in the woods.

Of course, one thing leads to another and little Eddie Furlong eventually digs up his dead mommy and re-buries her in the “pet sematary”. She comes back, along with other zombie people like the mean cop, the school bully and a pet dog.

The end is silly, the plot makes very little sense and the motivations of the characters are confusing, especially Edward Furlong turning crazy, realizing his dead mother is murderous and then switching back to normal almost immediately.

There’s some stuff I like in this other than just Clancy Brown, though. The biggest thing that sticks out, is when the school bully is murdered with a fast spinning dirtbike tire grinding into his face. Also, the car chase scene where the zombie cop is trying to murder his family was fun to watch, even if the action played out in a nonsensical way.

Pet Sematary Two is a goofy movie. But it’s that fun sort of goofy that makes a hardcore ’90s horror fan smile. It’s really just one of many Stephen King adaptations or spinoffs from the early ’90s that missed the mark, as far as its source material, but still delivered and entertained in spite of its flaws.

Sometimes documentaries about movies are better than the movies themselves. While some people love Pet Sematary, it’s not one of my favorites. But since I just revisited it and reviewed it, I wanted to check out this documentary about its creation.

I love documentaries about filmmaking and storytelling. So this was right up my alley.

What’s really interesting about this is the backstory about the novel and what inspired Stephen King to write it in the first place. Also, the novel’s story is pretty neat too, as it goes into how the publisher wouldn’t put it out due to it featuring the death of a child. But ultimately, the book did see print and eventually led to the film, which also went through some of its own issues in getting green lit.

Unfortunately, Fred Gwynne died a few years after the movie came out but this documentary still rounds up the entire cast apart from the great veteran actor. I loved hearing them share their experiences.

This also delves into the impact the film’s production had on the small Maine community where it was filmed.

One of the highlights for me, was the production footage and photos of the behind the scenes stuff from constructing a spooky house to how they did the make up and special effects, as well as rounding up a lot of the key behind the scenes people to talk about it at great length.

In a way, this actually made me appreciate the finished film more than I did before seeing what went into it being produced. So maybe I’ll watch it again soon.

Rating: 7/10
Pairs well with: Pet Sematary and Pet Sematary Two, also any Stephen King movies from the ’70s through ’90s.

With a Pet Sematary remake just a few months away, I wanted to revisit the original 1989 film, as it has been a really long time since I’ve sat down and watched it.

I wasn’t a big fan of it, back in the day, but I did remember that it was legitimately eerie. I wanted to see how it aged and if maybe I missed something when I was younger.

One thing that this movie does really well is suspense. It has a very slow build and it takes time to get to the good stuff but there really isn’t a wasted moment in the movie and it wasn’t too slow or boring. It just crawled forward, scratching away at the surface as it crept closer and closer.

The payoff isn’t fantastic but it isn’t bad either. I’d say that this hasn’t aged well. Even though Miko Hughes made a great creepy kid, the way that his more vicious attacks are shot and edited is pretty shoddy. The moment where he lunges out of the hole in the attic onto his father is pretty cringe even for 1989 standards. I always liked Miko Hughes though and he would go on to be in a lot of stuff in the early ’90s. He was damn good on Full House and he was a pretty capable child actor in things like Wes Craven’s New Nightmare.

The big positive of the film is Fred Gwynne, most famous for playing Herman Munster. It’s hard to really peg him and who he is but the film slowly reveals more and more about his past and what he knows about the strange proceedings. Seeing him die in a horrific way was pretty effective, as you do feel pretty bad for the guy.

I also liked that Denise Crosby was in this just coming off of her short stint as Tasha Yar on Star Trek: The Next Generation. I haven’t seen her in much outside of Star Trek related stuff but she did a good job here, as she tried to transition into film from television.

Overall, this isn’t a bad film. I enjoyed coming back to it all these years later and I certainly have more of an appreciation for it now but it isn’t in the top tier of Stephen King adaptations for me.