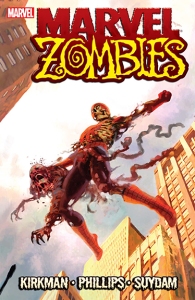 The recent What If?… episode that featured a Marvel Zombies storyline made me want to go back and pick up the original comic, which I’ve always considered to be the best version of that concept. But since it had been so long since I read it, I wanted to see how well it held up and whether or not I was seeing it through rose-colored glasses.

Well, this was just as fun and as crazy as I remembered it. I think that I also have a much stronger appreciation for Robert Kirkman’s writing now and honestly, who was better at tapping for this concept than the creator and writer of The Walking Dead?

I also loved Sean Phillips art and I wasn’t as appreciative of him back in 2008, either. I’ve since enjoyed a lot of his work, especially the stuff he’s done in Ed Brubaker’s noir and crime comics.

The story is pretty simple, almost the entire Marvel universe has been infected with a zombie virus. So the few survivors are tasked with fighting off famous heroes and villains while trying to find a cure or just flat out escape. Ultimately, this aligns with the coming of Galactus and that leaves the door open for more stories, which we already know were made.

While this plays out like you’d expect, there is still enough story here to make it more than a simple, “run from the zombies” tale. It’s also cool seeing how zombification effects certain characters’ powers. Additionally, as gruesome and hopeless as his fate seems, this story gave us the most badass version of Black Panther that probably ever existed.

Look, this doesn’t tie directly to the main Marvel continuity but it’s a hell of a fun read and was a cool experiment that worked exceptionally well before the concept was milked to death. 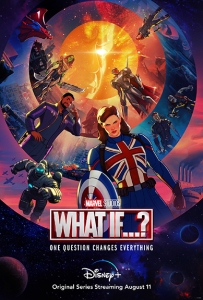 Marvel’s What If…? is like all things MCU since Avengers: Endgame, a mixed bag of good and stupid.

So let me start by saying that I did enjoy some episodes of this show, while others were absolute shit like the one that sees Black Panther become Star Lord, which doesn’t make a lick of sense and also had a side plot about Thanos not committing universal genocide because T’Challa simply talked him out of it. That episode made me facepalm, repeatedly, so hard that I broke my nose about seven times.

Anyway, it’s clear that Disney is using this show to push certain social narratives without really caring about what that does to the continuity of the second greatest franchise they’ve ever had. But just like the once greatest franchise, Star Wars, Disney is out to wreck this one too.

So for the positives, I mostly liked the Peggy Carter episode, as well as the Doctor Strange one. While the T’Challa one was, hands down the worst, the others weren’t too bad, they just didn’t do much for me.

I was most excited to see that they would do with the Marvel Zombies concept, as some of those comics were fun as hell. Well, I’m glad that they tried something original with it, story-wise. However, it just didn’t hold my attention and was really underwhelming.

Also, I’m not big on the animation style. I really didn’t like it at first but my brain did adjust to it fairly quickly. The main problem with it, is that it looks almost too generic and in the Marvel Zombies episodes, for instance, I had a hard time telling some characters apart because they looked too similar.

When Disney first announced all the Marvel shows that would be coming to Disney+, this is one of the ones I was most excited for. I have loved the What If? comics since I started reading comics. Out of all of the issues that exist with great premises and alterations to continuity, I found it really disappointing that these were the stories they went with to kick off this series. But I guess I just shouldn’t expect much from Disney, at this point.