After the success of the early ’90s X-Men cartoon on Fox, it was natural for the network to ask for more Marvel properties to adapt for their Saturday morning audience. The Spider-Man series was the longest running and most successful of these animated spinoffs.

While the X-Men show still stands as my favorite of these animated Marvel series, Spider-Man is a very, very close second and nearly as good.

The stories are generally well written and even if they have to take some liberties and alter the plots from the comics. This was due to time constraints and by trying to wedge in the debut of Venom really early in the series, which changes the overall timeline of events in Spider-Man’s life, greatly. Also, the showrunners probably wanted to get as many villains added into the mix, early on, so that each new episode felt fresh.

Spider-Man has a massive rogues gallery and this show utilized the core villains really damn well.

The tone of the cartoon is pretty perfect. Sure, there are cheesy and hokey bits in every episode because this is a kid’s cartoon but it does stay pretty true to the tone and style of the source material. Most importantly, it’s true to the characters and the writers obviously knew the Spider-Man mythos well.

I love this show and it’s still fun to have minimarathons of episodes. Honestly, to me, it’s one of the highlights of Disney+.

Rating: 8.25/10
Pairs well with: the other animated Marvel television series from the ’90s.

This show came out in a time when I was way more interested in chasing girls than watching Saturday morning cartoons. Also, I was probably really hung over on Saturday mornings in 1998. Plus, this series was really short-lived that I didn’t even know it existed until years later.

I binged watched it online in an afternoon, though, as I wanted to see if it was as good as some of the other ’90s Marvel cartoons that were on Fox and existed as part of that X-Men ’92 animated Marvel canon.

I think that this is pretty decent but it didn’t pull me in like the X-Men or Spider-Man cartoons of the same era. Also, it relied heavily on CGI and with that, gave us a weird mix of traditional hand-drawn 2D animation with 3D CGI graphics. It’s not terrible, visually, but it’s a bit jarring at times and the two styles have never really worked together for me. Also, the CGI stuff looks really cheap, which is probably just because of the time when this was made, as CGI animation wasn’t as refined as it would become.

This is similar to the other shows it shares a universe with, as it adapts the comic book stories but takes tremendous liberties with the material due to the length of the episodes and trying to get the franchise off of the ground with lots of characters as quickly as possible. Considering that everything is condensed down to just 13 episodes, I’m okay with it.

I really liked the three-part origin episodes more than the rest of the series but it was cool seeing what characters they started to sprinkle in and a second season, had it been made, could’ve been an improvement with a much larger universe to explore and a richer mythos.

All in all, this was a fun way to waste a Sunday afternoon. It’s hard to tell what this could’ve been due to it not surviving a short, first season. 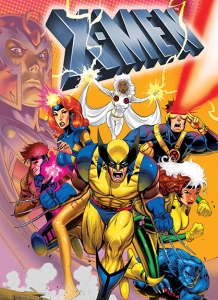 This animated show was the absolute highlight of my week back when it first came out and for a few years until high school took over my life and with it, the pursuit of other things. Honestly, I kind of checked out on this show around the same time that I checked out on comics because I was playing sports and trying to impress girls.

I did end up watching the show in its entirety, years later, after it was all available to stream on Netflix some time ago. I liked it and I thought that the show mostly maintained its consistency till the end, minus a few bad episodes, here and there.

Now that it’s on Disney+, I felt compelled to revisit it, as its been awhile and my memories of it are so fond.

However, despite still recognizing its greatness, it doesn’t quite resonate the same way for me anymore. I don’t blame the show, though, I blame the age of the viewer: me.

As I’ve gotten older, it’s harder for me to sit through long bursts of animation. I’m not sure why but I watched a handful of episodes and found my mind wandering, looking at my phone, looking at the clock and then thinking that I’d rather just read the comics that these stories are trying to adapt.

I then talked to a friend about it and he said that he feels the same way with most of the cartoons he used to watch. He’s 44 and I’m now 41. So I wonder if 40 is some sort of point where the mind severs itself from this type of entertainment? But then, I can still watch Batman: The Animated Series and the Marvel/Sunbow era of G.I. Joe: A Real American Hero.

That being said, I can’t shit on the show for my personal inability to sit through it now.

It’s a stellar animated series, one of the best of its era. The stories were well adapted, even if they took a lot of liberties and didn’t follow the same sequence as the comics.

If you were a kid in the ’90s, you probably watched the X-Men cartoon that used to be on Fox on Saturday mornings. It was solid, did a pretty good job of adapting some of the comic book’s big storylines and introduced a lot of non-comic reading kids to the X-Men franchise.

It ended after a few seasons and never really had a proper follow up. Well, that is until recently, as the show moved into the medium it was born out of: comic books.

Maybe this took its cues from DC Comics and how they came out with Batman ’66, a comic book series that revisited the 1960s Adam West Batman TV series. But one can’t deny that Batman ’66 was a cool comic, a great idea and with that, should have inspired other comic books that continued the stories of comic book characters as they were presented in other mediums. Hell, I’m still waiting for that Batman ’89 comic that was once teased and then had those teases retracted.

But this is about X-Men ’92, which was a decent follow up to the animated series.

Overall, this was a fun read but it didn’t wow me in the same way that Batman ’66 did. Where that Batman comic felt tonally right and as if it was a true continuation of the series, X-Men ’92 throws some weird curveballs and also tries to force in way too many characters just for the sake of the creators trying to give you the animated series’ versions of these characters.

Maybe they knew this series would be short lived and therefore, they wanted to wedge in every character they could but it really becomes too much to process in the second half of this series. Also, I wasn’t a fan of devoting so much time to a Dracula/vampire story. None of that was central to the core of the cartoon and it shouldn’t have been central to the core of this comic.

Also, this feels like it is just borrowing the visual style of the TV show but it doesn’t seem to understand the tone or the spirit of it.

It’s still entertaining for fans of the source material but I wouldn’t call it a must read or all that necessary. Die hards should check it out but I can see why this didn’t make it a year where Batman ’66 has still been hanging on for quite awhile with a long running series and several crossovers.

Rating: 6.75/10
Pairs well with: the animated series it’s based on, as well as ’90s X-Men comics and various spinoffs.