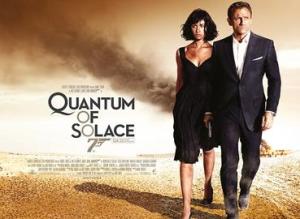 “They say you’re judged by the strength of your enemies.” – James Bond

Quantum of Solace is a weird James Bond movie that seemed like it was trying to reinvent the franchise, tonally, after it already went through a major stylistic overhaul in the superb, previous film, Casino Royale.

I think that the director, Marc Forster, took a lot of creative license and the film suffers for that. Something that is part of a franchise, should have certain standards that keep the film cohesive and consistent with the other chapters in the larger, decades long, body of work.

I don’t necessarily blame Forster, as the studio may have been really keen on altering the Bond franchise following the immense success of Casino Royale. Plus, Forster wasn’t a guy known for action movies, he is known more for his dramatic, artsy films like The Kite Runner, Stranger Than Fiction, Stay, Finding Neverland and Monster’s Ball. And if I’m being honest, his other major action film, World War Z, really missed the mark too. But, personally, I really like most of Forster’s dramatic work and he is typically a great visual storyteller. I think that is probably why he was given a shot with this film, as Eon Productions possibly wanted an actual visionary to come in and freshen things up even further.

However, the problem with his action direction is almost immediately apparent in this film, as the opening scene features what should be a really fantastic sequence but it’s destroyed by quick, choppy edits that make it pretty hard to follow. It’s like a rapid paced mess of wasted, expensive shots, all of which deserved more than a split second of screen time knowing the level of craftsmanship and work that went into setting up those shots.

This issue carries over into all the other action scenes though and this is a hard movie to watch and absorb during these moments, which are aplenty.

Apart from that, the film also feels incomplete. It feels like two-thirds of a Bond movie were slapped together as best as the studio could salvage and then released with the hope that it would just be a hit, capitalizing off of the great movie before it.

For those who might not know, this film was made during the time of a big writers strike in Hollywood. When the strike happened, for better or worse (definitely worse), all writers stopped working. So it’s possible that the script was unfinished and for fear of losing money and being delayed, the studio just shoved this into the filming stage. It’s hard to really place blame on anyone due to the situation but the end result was a really lackluster Bond film and the worst one of the Daniel Craig era. Granted, there is still one more Craig-led film, which is slated to come out whenever this COVID-19 crap passes.

Quantum of Solace isn’t terrible; it’s just okay. Frankly, it’s almost forgettable other than the plot threads that tie it to the reemergence of the villainous SPECTRE organization.

Rating: 7.25/10
Pairs well with: the other James Bond films of the Daniel Craig era.

“Most people don’t believe something can happen until it already has. That’s not stupidity or weakness, that’s just human nature.” – Jurgen Warmbrunn

I didn’t have much urge to see World War Z when it came out. The zombie craze has been out of control and nothing about it seemed too terribly interesting. Granted, the zombies ran with lightning speed, had the behavior of ants trying to reach food and would destroy themselves in the process of hunting humans. Still, we had fast suicidal zombies with Zack Snyder’s Dawn of the Dead remake over a decade ago.

While there wasn’t seemingly anything new here, I did enjoy the film. Brad Pitt knocked it out of the park and the appearance of Peter Capaldi (the next Doctor on Doctor Who) added an extra level of awesomeness.

The plot was okay enough, as Brad Pitt had to travel the zombie infested world, figuring out what the cause of the outbreak was and how to stop it. The conclusion doesn’t quite answer the question but it is still as happy as a happy ending can get in a film where practically everyone is eaten.

The film is intense, which kept me engaged and the added mix of different geographical locals brought some contrast to each sequence throughout the film. The zombie outbreak on the airplane though, that’s probably the high point.

This isn’t what I would call a great movie by any means. It wasn’t very inventive and didn’t bring much of anything new to the zombie genre other than world travel. I still enjoyed it though.