Well, despite Manic Cop II being better than the first film, the trend of improving through the sequels ended there. Maniac Cop 3: Badge of Silence is mostly, pretty damn awful.

In this chapter, the Maniac Cop gets a crush on a female cop who was shot in the line of duty and is possibly going to die in the hospital. The city bureaucrats and crooked cops, who didn’t learn anything from the Maniac Cop’s quest for revenge over the first two films, decide to kill the lady cop to avoid bad press or something. Maniac Cop doesn’t like this and he sets out to murder all those evil douchebags that have hurt his crush. Of course, other people aren’t safe, either.

Overall, this film in the series is pretty boring when compared to the two pictures before it. It is really just drab in almost every way. It also employs a voodoo story line which was being done to death in this era of horror. We already saw it in the Child’s Play series, Candyman and The Serpent and the Rainbow but it was in a ton of movies in the mid-80s through mid-90s.

There is one really cool and memorable sequence, and that is when our heroes are in an ambulance and Maniac Cop, body on fire, pulls up alongside them driving a cop car. This sequence goes on for far too long but seeing a man on fire, driving a squad car in a lengthy car chase was really impressive.

Before that scene, Maniac Cop caught on fire in a church and it felt like a poor rehash of the “Maniac Cop on fire” scene from the prison in Manic Cop 2. However, carrying it over into a car chase redeemed its recycling and upped the ante quite a bit.

Ultimately, this film stinks. It was the first in the series to be almost universally disliked by critics and fans of the series. It is the only one to sit at below 5.0 on IMDb, putting it in the negative half of their rating spectrum. Granted it is currently at 4.9. Regardless, there was never another Maniac Cop after this one. Although there is a remake being developed by Nicholas Winding Refn of Drive fame.

There is a belief that sequels are never as good as the original. Well, Maniac Cop 2 bucks that trend, as it is better than its great predecessor. While the IMDb rating doesn’t reflect that, most people don’t know what the hell they’re talking about, which is why Avatar is the highest grossing movie of all-time.

We’re missing the gravitas of the first in regards to it boasting the acting talents of Tom Atkins and Richard Roundtree. Bruce Campbell comes back, at least, even if it is in a limited capacity. However, we do get Robert Davi and that’s a big plus. Clarence Williams III and Danny Trejo also have small roles in this.

This chapter in the trilogy sees the Maniac Cop return, as he didn’t die in the finale of the first film. His first order of business is to tie up the loose ends from the previous movie, which in a horror picture translates to “kill those damn survivors!”

We also learn more about the situation that sent our title character to prison in the first place. He was a good cop that went to the extreme, at times, but he was set up in a government conspiracy and made to take the fall. All this comes out in this movie and Robert Davi is on a mission to clear the Maniac Cop’s name and hopefully give him peace: ending his spree of violence.

The action in this film is a lot heavier and so much better than the first one. There are a lot of good vehicle sequences and then the big battle between the Maniac Cop and an entire police station is absolutely fantastic. Then there is the finale where he storms the prison, catches on fire and angrily stalks and murders the criminals who initially killed him behind bars, all while he is still on fire!

Maniac Cop 2 is a solid film. It is low budget horror at its finest but it is a film that has so much more than that. It also surpasses the first movie in bad ass intensity. Robert Z’Dar was so good as the monster and this is the monster at his best. 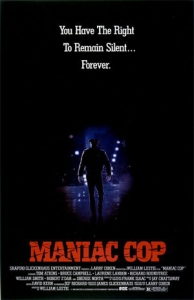 This is a film that stars four incredible bad asses. First you have Tom Atkins, who kicks the bejesus out of anything in his path even if he doesn’t look like a traditional action star. Then you have Bruce Campbell a.k.a. Ash Williams from Evil Dead and Brisco County Jr. from The Adventures of Brisco County Jr. Add in Richard Roundtree, who will always be known as Shaft, and Robert Z’Dar, most famous for his role here, as the Maniac Cop, but who has also been in a slew of bad ass roles over his career.

If that isn’t enough to sell you on this film, I don’t know what is.

In the film, there is a serial killer who seems to be picking random people to murder. It isn’t long before it is discovered that the killer is a cop. Bruce Campbell’s character gets blamed for the killings but he isn’t the guy doing it. Tom Atkins is leading the investigation and has to answer to his boss, Richard Roundtree. The killer is a hulking giant of a man in a police uniform. The Maniac Cop is actually Robert Z’Dar and the story tries to put the pieces together in an effort to discover his identity and why he’s become a murderous maniac.

While this film fits the slasher formula, it is more of a whodunit mystery. This film is also more of a crime thriller, whereas its sequels went the more traditional slasher route.

It is a pretty decent film overall but it isn’t anything exceptional. The cast makes it much better than it should be. The movie is bogged down by poor editing, direction and a shrill and incomprehensible score. The music is fine to a point but there are scenes where the score takes over and is a distraction, most notably in the shower fight scene.

The cinematography is pretty good though. While the film is dark, for the most part, the highlights and subtle lighting work add a depth to the visual side of storytelling. The scene where the Maniac Cop is flashing back to his demise in prison, is a good example of how a really dark shot can have life, as the sliver of light highlighting the character’s eye while his body is a black silhouette adds a sense of humanity to the monster.

Maniac Cop is not so much a classic, as it is just a really cool slasher picture that is different from the norm. It takes itself more seriously and it has a bit more gravitas than your run of the mill 1980s masked killer movie.