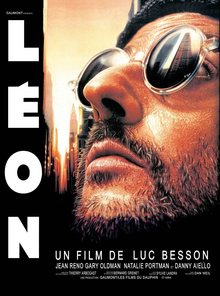 While I need to rewatch The Fifth Element in the very near future because I surprisingly haven’t reviewed it yet, I’d have to say that Léon: The Professional is probably my favorite Luc Besson movie.

I first saw this when it came out to rent on VHS and upon seeing it, I had wished that I actually got to experience it on the big screen.

The four main actors in this are phenomenal. Jean Reno is perfectly cast and this is still the greatest thing that I’ve seen him do. Natalie Portman proved, at a very young age, that she had what it took to carve out a pretty stellar career, which she has. Gary Oldman absolutely shined as the movie’s antagonist and came across as a legitimately intimidating, psychotic, piece of shit. Danny Aiello wasn’t in the picture for more than a few scenes but he came across as the real veteran, making those who shared scenes with him even better. I especially liked the exchange between Aiello and Portman.

What’s really odd for me, at least, is that I’ve never been a big Portman fan and I think a lot of that stems from what felt like disinterest in some of the roles she’s played like in the Star Wars and Thor movies she’s done. But here, she is impressive and fully displayed her talent and how good she can be when she cares about the material she has to work with.

This is a violent but tender movie and the fact that it is able to balance the two things so perfectly is what makes it really damn good.

Additionally, the hitman stuff comes across as authentic and genuine. I love the opening of the movie, which shows you how great Léon is at his job. The action is intense and, at times, over the top and stylized for a greater cinematic effect but everything in the movie still feels real and plausible.

I also like the coming of age stuff and how Matilda is entering her teen years, having to deal with that, while also having to survive her family being murdered and essentially being on the run from a very dangerous madman with a police force at his disposal.

There are just a lot of layers to this movie but everything comes together so wonderfully. The fact that it’s so well acted and meticulously directed also makes it a film worthy of its strong cult status. 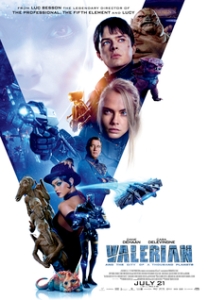 “I didn’t come here to get a makeover.” – Laureline

Going into this, I had no expectations either way. Part of me wanted this to be a true spiritual successor to Luc Besson’s classic The Fifth Element, which is twenty years old this year. Another part of me sort of expected this to follow the trend of Besson’s modern work, which has been hit or miss but mostly miss. Valerian and the City of a Thousand Planets is both of these things.

Is it on the level of The Fifth Element? No. But it does channel that film in its subject matter, visual flair, bizarreness and creativity.

The film starts out strong and really gets you into the spirit of what it’s trying to do. Unfortunately, once the main actors show up, it takes you out of the picture. I don’t necessarily blame them but the quirky dialogue that they had to work with was pretty awful. They also completely lacked chemistry and just looked like two fish out of water when they were forced together. It was like watching two young kids trying to be witty and cool while trying to be into each other but you knew they were probably just dating because of social pressure from kids cooler than them.

I’m not sure why but Dane DeHaan just doesn’t do anything for me. People seem to love this guy but I don’t get it. Most of the time, he talks like he is trying to channel some sort of cool inner bad ass but it just sounds like a teenager trying to act tough. His voice sounds like it isn’t even confident in its delivery. It’s like he’s a weakling playing the part of a bad ass and that he’s terrified that he’ll be exposed at any second for not being a cool tough guy. It brings me back to when he played Harry Osborn a.k.a. the Green Goblin in The Amazing Spider-Man 2, I kind of just want to smack him and tell him to go to his room. And if you want to compare this to The Fifth Element, he doesn’t have a tenth of the presence or personality of Bruce Willis.

Cara Delevingne is better than DeHaan in this but she still needs more experience before taking over the reigns of a film. However, my favorite part of this movie was when DeHaan was briefly taken out of the picture and Delevingne took over in an effort to find him and rescue him. I’d actually prefer her in a solo film, to be completely honest.

The biggest problem with this movie is not the acting, dialogue or the directing. What killed this movie for me is that it seems like a collage of really cool visual shit mixed up in a nonsensical way. The story was all over the place and just seemed like it was there to string together a bunch of random scenes that would have worked better as shorts or music videos. The plot was confusing and hard to follow throughout most of the picture. When you get to the end, there is a lot of over-explanation as to what is going on in an attempt to make sense out of the two hour mess before the big climax.

Valerian is absolutely beautiful and imaginative but that is all it is. It is a film that showcases so much potential but fails to do anything with it. It was poorly written, poorly directed, poorly acted and poorly executed. Even Clive Owen and his iron gravitas could not save the picture.

And ultimately, the best thing about the movie is the opening sequence which features humans and aliens coming together over generations, set to the tune of David Bowie’s “Space Oddity”.

I also find it odd that this film completely whitewashes the Avatar aliens and no one cares. 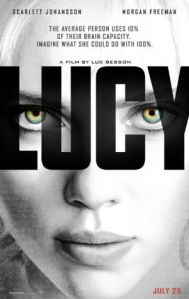 I went into this film anticipating having problems with it. I did.

It is no secret, even from just watching the trailer, that this film is chock-full of really bad science. Actually, atrocious science.

You see, the whole film rides on the plot point that human beings only use 10 percent of their brain. The film explores what would happen if human beings could use more than that or even reach 100 percent, which is what does happen in the end of this film.

Why is this bad science? Well, you should already know the answer to that but if you don’t, the 10 percent thing is a myth and it is a misunderstanding of the fact that only about 10 percent of a brain’s cells are neurons. Neurons are the important working bits of your brain. You do use them all. The other 90 percent of your brain is made up of glial cells that act as a support system for the neurons. So the other 90 percent supports the 10 percent and thus, you are already using 100 percent of your brain. How this myth became “fact” to many people is kind of astounding but when we live in a world where people get their information from memes and Twitter, you can see the problem.

But I get that it is supposed to be just some mindless action film. Right?… Right?

The film starts to take itself too seriously, as it comes across as if it is trying to show how smart of a film it is conceptually. I can only assume that the director Luc Besson has never picked up a science book in his life, as this feels like it was inspired from a conversation between two burnouts stoned out of their everliving minds. And not only does he not know how the brain works, he also doesn’t know jack shit about matter. This is important to point out, as matter manipulation becomes a major plot point.

It kind of disappoints me that Morgan Freeman and Scarlett Johansson would even touch this script, let alone do this film. Maybe they just wanted to work with Besson, whose early work was pretty stellar. He has kind of fallen from his earlier grace.

If this film had just been a straight up action film with Johansson as a bad ass, it would’ve probably been pretty good. Hell, it could’ve played like a Black Widow solo film. Instead, it played like a film written by a middle schooler that was able to get a decent budget. Then again, the CGI bounced back from really good to shitty from scene-to-scene so maybe the budget went over somewhere.

From an acting standpoint, Morgan Freeman was typical Morgan Freeman. Scarlett Johansson was good at times but once her brain power started increasing, she just stared off into space like a zombie and tilted her head every ten seconds like a puppy hearing a weird sound.

I tried to ignore the bad science and even when I did, the film was just so pitiful that it didn’t really matter.