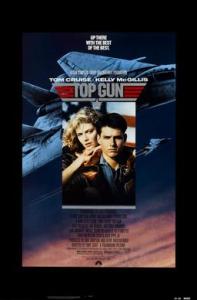 “That was some of the best flying I’ve seen yet. Right up to the part where you got killed. You never, never leave your wing man.” – Jester

If you weren’t around when this movie originally came out, it might be hard to understand how much of an impact it had on pop culture. As a kid and a big fan of G.I. Joe and movies like Iron Eagle and Red Dawn, I thought it was cool as hell. The coolness was also maximized through the casting of Tom Cruise and Val Kilmer, as well as the Kenny Loggins hit song “Danger Zone”.

Also, to my little mind, Maverick was about the coolest f’n name ever!

Anyway, I used to watch this a lot. It’s been years since I’ve seen it though but I wanted to get a fresh take on it before its long-awaited sequel comes out later this year, assuming it’s not delayed again.

While I actually don’t see this as a great film or have the crazy amount of love for it as many from my generation do, it’s still entertaining as hell and it’s really cool simply for the insane visuals of all the fighter jets just doing their thing. The aerial stunt work is f’n phenomenal! That being said, there just wasn’t anything like this when it came out and many have tried to replicate it with less success. Nowadays, they just opt out and go the CGI route but everything you see in this movie is real.

Apart from that, the story is just decent. It doesn’t really grab you or pull you in and it feels like its all just to set up the aerial parts of the movie. While I do like the characters, they also feel grossly underdeveloped. You spend all this time with them but it’s hard to connect to them. Sure, it’s tragic when Goose dies and you understand Maverick’s heartbreak but it doesn’t have as much impact and meaning had we seen these characters fleshed out more.

I think that the movie actually suffers from having a little too much of its best part: the aerial stunts. If that was trimmed down a bit or the film was a wee bit longer and just spent more time developing the core characters, it could’ve been something much better.

Still, it is a cool and energetic movie that’s well acted and superbly executed. And despite what I feel is a lack of character development, it does hit me in the feels when Iceman finally accepts Maverick at the end.

Also, I f’n love James Tolkan in everything.