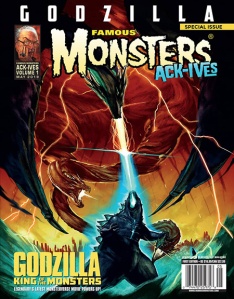 I recently picked up and read the Famous Monsters – Ack-ives on Hammer Horror. While reviewing it, I noticed that it was the second volume in Famous Monsters new Ack-Ives magazine specials. So when I looked it up and saw that the first one was focused on all things Godzilla, I had to track down a copy of it.

Like the Hammer one, this is basically full of a book’s worth of material in a large, colorful, photo heavy magazine format.

There is a lot here and I really enjoy these releases by Famous Monsters and I hope they keep doing more.

Essentially, these are collected archives of past articles focused on the specific subject. I think that this one was released to tie in and help promote the recent American Godzilla sequel.

Ultimately, this magazine was a treasure trove of Famous Monsters’ best articles on the top kaiju franchise in the world.

For fans of kaiju movies, especially those featuring the King of Monsters, this is definitely worth picking up and adding to your collection. 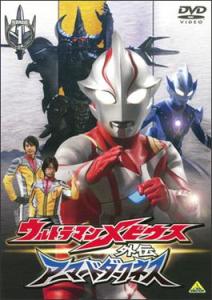 While these five episodes were originally released as three separate stories, for their American streaming release, they were bundled together as five 13 to 26 minute episodes under the name Ultraman Mebius: Side Stories.

All three stories take place after the Ultraman Mebius television show and serve as the official conclusion to Mebius’ story, even though he’s appeared in other Ultraman films and shows since these were released. But in any event it’s the finale for the normal human characters that fans came to love in the Mebius show.

Overall, this was pretty cool to see, as it’s been a while since I watched Ultraman Mebius and this made me properly nostalgic for it. So I guess it really did its job in that regard. And frankly, I would have watched this just after I saw Mebius but it wasn’t available in the US until just recently.

This, like many Ultraman events, was full of multiple Ultramen and multiple villains, many of whom played a major part in the Mebius mythos over the show’s 50 episodes.

The special effects and tone are exactly what one should expect from an Ultraman special event of the time. It truly looked like an extension of the show and could honestly just be five episodes tacked on at the end and most people wouldn’t know the difference.

I thought that the effects were a wee bit better than the norm but this probably had a bigger budget per episode than the television show that had to be more frugal due to the scale of the production.

If you like Ultraman Mebius, I don’t see any reason why you wouldn’t enjoy this, especially the Armored Darkness story.

Rating: 7/10
Pairs well with: the Ultraman Mebius show and other Ultraman movies and specials.

From Filmento’s YouTube description: Godzilla: King of the Monsters is yet another big blockbuster flop of the year 2019, even with everyone’s favorite Millie Bobbie Brown at the front. And that’s actually sad to hear, because this movie is the perfect example of how to properly make these massive Hollywood monster creature movies. In today’s family friendly PG episode of Youtube’s favorite show Film Perfection, let’s see how Godzilla 2 handles its ancient titan monsters and ties them into its human characters, in a way that results in one unified experience. Now I just need a movie about that Leviathan titan monster, Titanus Leviathan or whatever. 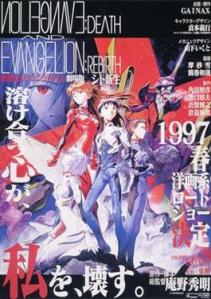 “Shinji, this is your home now.” – Misato Katsuragi

This, the last of the three Evangelion offerings on Netflix, is a bit confusing.

This is the second re-edit of part of the Death & Rebirth animated film. And if Evangelion isn’t confusing enough, this is sort of just a few of the episodes mashed together.

I don’t know, this whole franchise is a real clusterfuck. I guess just watch the show and be annoyed by its Patrick Duffy in the shower ending. And if you want a better ending, they made one but I wouldn’t say it’s better unless you like Shinji screaming like a bitch for an hour and a half straight.

But I’ve said all this in previous Evangelion reviews.

So back to this.

In a nutshell, this was a complete waste of time.

Just stick to the show and dip out before the last two episodes. Then just make up whatever ending you want in your head because it will probably be better.

But seriously, the show was pretty great until they totally shit the bed.

Rating: 4/10
Pairs well with: all things Evangelion, as well as all things Robotech or Macross and Knights of Sidonia. 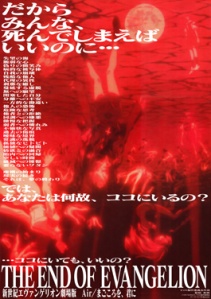 Yes, Shinji… you are fucked up.

In fact, Shinji makes this thing damn near unwatchable. If you thought he freaked out and had emo storms in the television series, it’s like he rolls all of them up, wedges them into just 90 minutes and then turns the volume way up.

I absolutely hate Shinji. I don’t care that he’s young and has had a troubled childhood. So did I at one point, I didn’t act anything like this.

It also doesn’t help that Asuka is having freak outs the whole damn time either.

So what this film is, is it is an alternate ending to the shitty ending that the television series gave us. This makes things real and not just some Patrick Duffy shower dream. And I wanted the events of the show to be real within the show. But this was not really an improvement when all is said and done.

This was damn hard to get through with all the emotional meltdowns and screaming.

The only saving grace was that the animation was a step up from the series but then it should be, as this was a film released theatrically.

Honestly, this film made me actually like the show less, as it exposed some of its flaws and made me never want to see Shinji’s bitch tantrums ever again.

But I guess I’ll watch the movie after this one too, as it’s on Netflix and I might as well complete all that’s offered there.

Let me order some new earplugs off of Amazon first.

Rating: 4.5/10
Pairs well with: all things Evangelion, as well as all things Robotech or Macross and Knights of Sidonia. 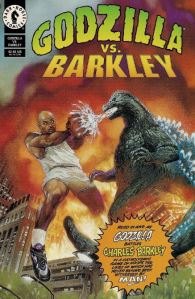 I have this weird obsession with collecting product tie-in comic books. This one is based off of the famous Godzilla vs. Charles Barkley Nike commercial.

Here we have a story that was penned by Alan Smithee, meaning that it was written by someone that didn’t want their real name on it. However, comic book great Mike Baron left his name in the credits, as he wrote the dialogue and did the fine tuning.

While this isn’t Baron’s best work, his humorous side comes out and it seems as if he enjoyed the project and made the best of it, giving us a pretty amusing tale with some charismatic characters, despite the ridiculous premise.

I thought that the art was also good. Charles Barkley’s likeness was captured well and the action panels of Barkley and Godzilla going head-to-head on the court were pretty dynamic and fun to look at.

The story is about a boy that’s given a special coin. The coin has magical properties that make Charles Barkley grow to kaiju size when he touches it. Frankly, this is all the plot that you really need because you don’t buy something like this for a compelling story, you just want to see these two behemoths throw down.

I’ve wanted this comic for awhile, so I’m glad that I finally got my hands on a copy. No buyer’s remorse here and I was pretty satisfied seeing my favorite monster go up against one of the greatest sports personalities of the last few decades.

Rating: 6/10
Pairs well with: other product tie-in comics, as well as all the other Godzilla comics put out by various publishers over the years. 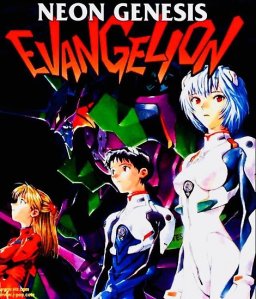 I wanted to revisit this and review it some time ago but I heard that Netflix was bringing it to their streaming service. Granted, at the time of that announcement, I didn’t know it’d be like another year.

Anyway, that’s probably how most people have seen this show now and I’ll say that I’m not super keen on the dubbing of the Netflix version. I like the original dubbing better, even if it’s been said that the new dub is more accurate. I just don’t like the voice work as much.

However, this is still a pretty good anime but is sadly undone by its bizarre ending that thankfully, got retconned later. Or that’s what I’ve been told anyway, as I haven’t seen the films that followed. But if you are really, really into this and don’t know what’s coming, expect a Patrick Duffy in the shower moment.

If you are a fan of stuff like Robotech, Alita: Battle Angel and Ghost In the Shell, then this should be right up your alley. Even if you’re not a big anime or manga fan but like kaiju or tokusatsu shows and movies, you’ll still find something to connect to here.

I mostly like the characters, their dynamic and the insane world that they live in. However, Shinji can become grating with all this yelling, whining, emo storms and absolute immaturity. Sure, he’s a kid but my homies would’ve smacked me if I acted like he did 90 percent of the time.

What I love most is the creativity that went into the design of the giant monsters. They aren’t traditional kaiju like those in a Godzilla movie but are more akin to monsters from the most bizarre episodes of the many Ultraman, Super Sentai or Kamen Rider series.

This is also full of a lot of religious iconography, primarily of the Christian faith. I wouldn’t call this show Christian, by any means, but it does tap into elements of its symbolism.

At its core, this is a coming of age story that sees young kids forced into adult situations. In fact, they’re thrown into war against these giant creatures. Piloting giant mecha and having to always be on the go, instead of going to school and playing sports (or D&D), these teens have to be saviors of the world.

While for some, the animation may feel dated now. I still think it looks fantastic. But this also came out at the height of my anime watching when I was still a teen. I’ve heard that the films after really upped the ante, visually.

Neon Genesis Evangelion is definitely an anime series worth watching, if you haven’t yet. It might not connect with everyone but there is a reason why it has been held in the highest regard for over two decades. In the end, fans of anime should walk away with something highly worthwhile.

Rating: 8.25/10
Pairs well with: Ghost In the Shell, Macross and Robotech related stuff, as well as Alita: Battle Angel.