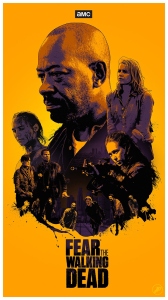 The Walking Dead really didn’t need of a spinoff. But as these things go, when you’ve got a cash cow, you’ve got to milk it until the teets come off.

What made this spinoff intriguing, however, was that it started when the zombie outbreak started. In The Walking Dead, we follow Rick Grimes, as he wakes up from a coma and enters a zombie infested world, months after the outbreak. Fear the Walking Dead starts on any given normal day and then the shit hits the fan. The first season shows society crumbling and how the main characters respond to it.

That rookie season was good but a somewhat unsatisfying origin story for The Walking Dead world. But once the show moved beyond the initial chaos, it got more interesting.

The sophomore season was broken into two halves, like a typical season of The Walking Dead. This show would follow that formula going forward. And while that season was a bit rocky, it found it’s footing in the second half, once our characters got off of the boat they lived on for eight episodes.

Season three switched things up quite a bit and by this point, a lot of the main characters were already wiped out.

But season four, the current season, is where the show really reinvented itself in a bold way. By the time you get through the first half of the season, only one person from the pilot episode is still alive. Additionally, Morgan from The Walking Dead comes on the show, officially crossing over, connecting this show directly to the events of the more popular parent show.

The fourth season also brings in a bunch of new and interesting characters and to be honest, it’s a completely different animal than what Fear was when it started out.

I’ve had a love/hate relationship with this show, which I have also had with the regular Walking Dead series, but it’s moving in a really cool direction.

It’s hard to tell where this will end up but I find it to be the more enjoyable of the two shows, right now. But being that this is The Walking Dead, that could change at the drop of a hat.

Rating: 8/10
Pairs well with: The Walking Dead, Deadwood, Sons of Anarchy and Hell On Wheels.