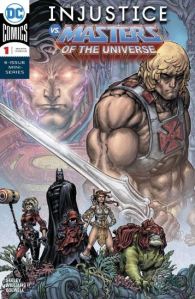 I haven’t played the Injustice video games or read the comic books. I get the gist of it though, so being a long-time fan of Masters of the Universe, I thought that the idea of seeing He-Man and his world mix it up with the DC Comics universe was a cool idea.

However, I did have to go into this with some skepticism, as most comic book crossovers of unrelated intellectual properties usually don’t leave us with great results.

This one was pretty good though. I can’t say that it was completely compelling but the story did a good job of wedging in a lot of characters while managing multiple plot threads. This had many layers to it and all of them kept me engaged.

I think the thing that I liked most about this was the art. It just felt perfect for a Masters of the Universe story, as it reminded me of the art of the old comics they used to package with the toys. It just drummed up nostalgia on a pretty high level and it was very effective.

This lasted for six issues but I feel like it could have been better if it was a bit longer. While it works well in the space it was given, I felt like some confrontations were rushed through and some of the action suffered a bit. There were just some cool ideas here that could have been explored just a little bit more than they were but I don’t want to spoil the story details for those who want to read this.

Overall, this was pretty damn good. Tim Seeley told a fun story within two very different worlds that I love and the art was perfect for what this project was trying to convey.

Rating: 7.75/10
Pairs well with: other Masters of the Universe crossovers and the Injustice comics, as well as regular Justice League stories.