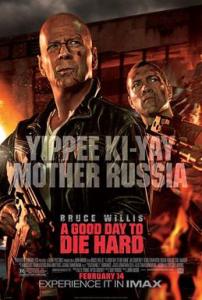 Well, not all Die Hards are created equal but at least three were great and another one was really good. This one, the fifth and final (at least for now), was the worst film of the lot.

That’s not to say that this is a bad movie, it just isn’t on the level of the four other pictures that share the Die Hard name.

In fact, take Die Hard out of the title and this is just another random Bruce Willis action film from the ’00s or ’10s that gets lost in the shuffle and just sort of blends in with the rest of them. It’s mediocre, uninspiring and pretty generic with only one real high point worth mentioning.

That one high point is the final battle with the helicopter. It’s a pretty cool sequence and well thought out and executed. However, it is somewhat ruined by shoddy CGI effects and the film being visually drab, overall.

There are other big action sequences but none of them are very memorable.

Part of the problem with the film is that it doesn’t feel Die Hard level in scale. Each film sort of felt like it got bigger than the one before it in some way. This actually feels like the smallest film in scale since the first one. While this takes place primarily in the streets of Moscow, it just lacks the energy and intensity of the third and fourth films, which took place in the streets of two major American metropolises.

I think this problem is due to the visual tone and the drabness of the picture. It definitely went for that modern action film aesthetic and it makes it look cheap and generic. The thing I loved about Die Hard With a Vengeance was that it didn’t resort to noticeable film filters or gritty digital enhancements, it just threw you in the middle of New York City and it felt like you were there.

This film feels like you’re looking at a video game that takes place in some generic European city. There just isn’t any life to it. And that’s not a knock against Moscow because I’m sure there is really cool shit that could’ve been captured on film there. This is more a criticism of the director, the cinematographer, the location scout and the obvious lack of creativity in trying to give this film an authentic lived-in world.

From a creative standpoint, this felt like the most half-assed Die Hard film and that the producers just kind of assumed that people would love it just because it featured the character of John McClane.

Additionally, the story was also generic and weak. In fact, this felt like they took a script for a cookie cutter, straight-to-DVD action flick and just repackaged it with the Die Hard name once they were able to lock down Bruce Willis.

Still, if you’ve got just under two hours to kill and you haven’t seen the film, it’s still a good time waster. Granted, if you haven’t seen any of the other four, watch one of those instead.

Rating: 6.25/10
Pairs well with: the other Die Hard films, as well as other Bruce Willis action films. 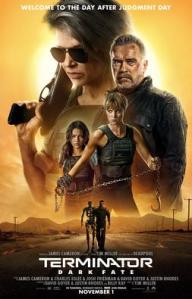 I hope the above quote from the T-800 actually rings true because this franchise has exhausted itself beyond repair.

Granted, it could go away for a few decades and try and reboot itself but chances are, Schwarzenegger won’t be around and he’ll be way, waaay too old. And frankly, without him, I don’t care about this franchise. Although, I did like the television show and if something came along and built off of that, we may have something. But I just don’t think that’s remotely possible anymore.

Like all the other sequels after Terminator 2: Judgment Day, fans wanted a nice hot, lobster bisque from a top notch restaurant but instead, were served a cold can of Campbell’s pea soup with a fork instead of a spoon.

This movie was a waste of the talent it had in it. Linda Hamilton came back for this bathtub fart, Schwarzenegger looked bored and Mackenzie Davis is capable of so much more than being a dry, boring, nearly lifeless half human/half machine. I think they totally forgot that she was half human and just told her to be a robot.

The film also shits on the legacy of the first two movies more than any other film in the franchise. It just straight up murders a young John Connor in the opening scene and if that doesn’t infuriate you, you’re not a fan.

That being said, if that had happened and was done to provide the viewer with something unique, compelling and with a real purpose, I could’ve lived with it. Instead, we got a soulless romp full of “girl power” nonsense that completely didn’t work because in the very end, the girls still needed the man to finish the job. I’m not trying to be a dick, here, but it’s hard not to be when the filmmakers do something so heavy handed yet so passé and just fuck it up in the end, anyway.

Linda Hamilton is one of the O.G. female badasses and it’s like the filmmakers forgot that shit and thought that they were giving us something knew and refreshing having female leads shoot guns and blow crap up.

As for the positives, I did like how Schwarzenegger’s Terminator character evolved and lived a normal life, developing human characteristics.

I also thought that some of the action was decent. Not great, but certainly passable by late 2010s standards. Unfortunately, those standards are grossly below the bar set by the first two movies in this franchise, three and four decades ago.

I also liked the villain Terminator and thought that he was a natural next step in killer robot evolution, unlike the robot from T3, which was overpowered beyond belief.

But that’s really about it for stuff I liked. I mean, it was neat seeing Hamilton and Schwarzenegger together again but unfortunately, that long overdue reunion was overshadowed by a movie without heart, soul or a point.

Rating: 5/10
Pairs well with: the other underwhelming Terminator sequels after T2.

Published: 1986
Based on: Cobra by Sylvester Stallone and Cannon Films, The Detached Mission by Yevgeni Mesyatsev 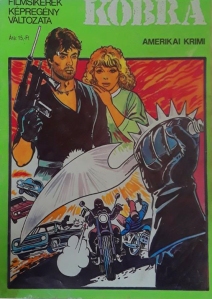 I don’t know Hungarian but I read through this as best as I could. I do have a Hungarian uncle and I asked if he’d translate this for me, as I thought scanning it in and redoing the lettering in English would allow me to share this with the English speaking world but my uncle when asked just said, “I’m not reading your damn comics for you!”

Anyway, this is an ashcan sized bootleg comic book from Hungary that is an unofficial adaptation of the Sylvester Stallone film Cobra. On the flip side there is a second comic book story, which is an adaptation of a Soviet military movie called The Detached Mission (in it’s English translation). I’ve never seen that film but I am a massive fan of Stallone’s Cobra, so I had to pick this up when I came across it, digging deep for obscure foreign movie adaptations in the comic book medium.

The Cobra half of this comic is 20 pages while The Detached Mission is just 12.

While this isn’t full of top notch art, the likenesses of the actors is pretty good. I mean, Stallone looks like Stallone. Brigitte Nielsen looks about the same and Brian Thompson, the Night Slasher, is pretty on point.

The only real problem with the comic is that it adapts the entire movie in 20 pages, which means that it speeds along pretty damn fast and this creates an issue with panel to panel transitions. The gist of what’s happening and the key points of the story are still conveyed but I can’t really speak on the writing, as I can’t interpret it.

This is high energy, full of testosterone and just a fun book to thumb through for hardcore fans of Cobra.

On the flip side, I gave The Detatched Mission story a read but without having seen the movie and due to the language barrier, I’m not sure how closely it is adapted. Still, it was also action packed and badass.

Tracking this down wasn’t easy and I did pay a fine penny for this but I have absolutely no buyer’s remorse. I love Cobra and Cannon Films, as well as obscure comics, so this is certainly my cup of tea. 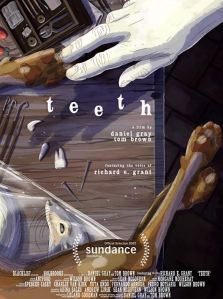 “That which is neglected, is lost.” – tagline

This is a short animated film about a guy and his relationship with his teeth over the course of his life.

What made this work for me was two key things.

The first was the narration by Richard E. Grant. His voice was perfectly paced and pleasant to listen to even if the visuals weren’t welcoming in certain parts. Just thinking of the knife and teeth scene gives me a bit of a chill but Grant’s voice was very soothing and drew you in.

The other thing that worked for me was the animation style. I just loved the look of this, the toned down colors, the flow of the movement and most importantly, how the shaky animation lines added a certain level of tension to the proceedings.

This is definitely an art piece more than anything but this is a good example of short film as art. It is both beautiful and disturbing, soothing and stressful. How those things mixed so well together is due to the meticulous craftsmanship of the writing and direction by both Tom Brown and Daniel Gray.

Rating: 7/10
Pairs well with: Probably any of the other modern short films you can find on FilmStruck’s streaming service, where I watch most of the stuff I find like this.