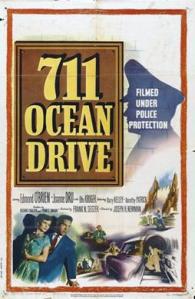 711 Ocean Drive was showcased on TCM’s Noir Alley a few years ago but it happened to air on a weekend that I was traveling, so I missed it. It’s since been in my Prime Video queue for a really long time but I finally got around to checking it out.

The film stars Edmond O’Brien, who is always dynamite in these sort of pictures. He’s no different here, as he commands the screen every time he walks into frame.

However, Otto Kruger also has an incredibly powerful presence here but when didn’t he?

Both of these guys are the things that make this picture work as well as it does and frankly, they kept me captivated and at full attention even if I thought that the script was kind of weak.

I like the premise about a telephone repair man finding a way to intercept horse racing results. However, even for the time, the premise and how it’s done in the film seems pretty far-fetched. If horse racing results are delayed from the east coast to the west coast, couldn’t mobsters just get other mobsters on the phone from across the country and get them to read them off the results as they happen, live? Landline telephones pretty much worked like they do now. So while I liked the idea behind the premise, it doesn’t feel wholly fleshed out in any sort of logical way. And if it was this way back then, I need to build a time machine to show these halfwits how it’s done.

That setup is there just to get the story moving, right?

Facetiousness aside, looking past that issue, I do mostly like the movie once it gets rolling. It’s well acted, as I’ve stated but it has a hardness to it. Hell, we see a greedy, double crossing shitbird get murdered by a car crushing him into a pier railing! That’s some hardcore stuff for 1950!

In the end, this movie is more good than bad, I guess. It just ultimately left me underwhelmed and baffled.

Rating: 6.5/10
Pairs well with: other noir films like The Miami Story, Johnny Allegro, The Killer That Stalked New York and Escape In the Fog. 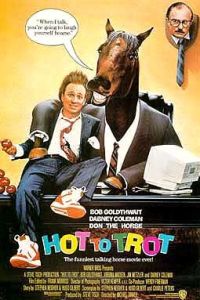 “[about the atrium in his new apartment] What is this a little yard?” – Fred B. Cheney

When Bobcat Goldthwait handed this script back to his agent, he wrote on the cover, “Why would I do this?” His agent returned the script after writing “$”. Needless to say, the script is terrible and the movie bombed but it was the most money that Goldthwait made at the time.

Many people will tell you that this is a terrible movie and it mostly is but it is a stupid movie with some solid comedy players and you don’t watch a film about the weirdest guy from Police Academy and a talking horse and expect to see Terms of Endearment.

Not only do you have Bobcat Goldthwait, who was a comedian I absolutely loved as a kid, but you get the voices of John Candy and Burgess Meredith playing horses, the always stupendous Dabney Coleman, Bobcat’s heterosexual life partner (at least in the ’80s) Ted Kazurinsky, as well as Virginia Madsen and a small part for Mary Gross.

The plot is about this dimwitted son of a rich woman who passes away. His stepfather (Coleman) is a slimy shyster that wants to weasel Bobcat out of his half of a lucrative financial firm. Bobcat also inherits a horse who goes on to give him amazing stock tips that makes Bobcat a superstar in his company. The majority of the plot deals with the rivalry between Bobcat and Coleman and ends with Bobcat playing a jockey, racing his John Candy voiced horse in a derby against Coleman’s prized steed for control of the company.

Yeah, the plot is friggin’ ludicrous but I still enjoy the picture because Bobcat and Coleman have always made me laugh, even in their dumbest moments. I also really love their scenes together which are accented by the absurdity of Coleman’s mouth prosthetic that gave him buckteeth throughout the entire film.

Originally, Elliot Gould was the voice of the horse but the test screenings went so poorly that the film was delayed for about a year and the horse’s lines were re-dubbed by John Candy who ad libbed his lines and ignored the script. Also, it’s worth noting that Bobcat’s role was originally intended for Joan Rivers and the script went through rewrites when Rivers turned the film down and Bobcat was cast.

Most people hate this movie. I just can’t. It’s completely asinine but I guess that’s what I like about it.

Rating: 5.75/10
Pairs well with: The classic TV series Mister Ed, the Police Academy movies with Goldthwait and Kazurinsky in them and the John Candy films Armed and Dangerous and Who’s Harry Crumb? 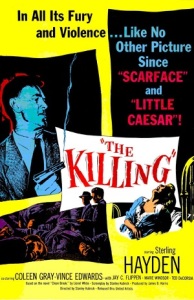 “You like money. You’ve got a great big dollar sign there where most women have a heart.” – Johnny Clay

The Killing is one of the really early films in auteur director Stanley Kubrick’s long and storied oeuvre. It came out less than a year after his previous film and first attempt at film-noir, Killer’s Kiss. With similar titles and coming out around the same time, the two films may confuse people looking back into Kubrick’s filmography. Also, Killer’s Kiss and The Killing are both noir pictures and presented in silvery black and white.

The Killing is the superior of the two pictures, however, and Killer’s Kiss feels like more of a practice run leading up to this damn fine motion picture, which boasts the star power of well known noir actors Sterling Hayden, Coleen Gray and Elisha Cook Jr. Plus, Marie Windsor is perfection in her role.

The plot of this film is about a high stakes heist at a horse track. A team is assembled, a greedy femme fatale enters the mix and we get scheming, violence and chaos. And it is all capped off by the immense talent of Kubrick behind the camera and a stellar and more than capable cast in front of the camera.

The truth is, The Killing, as great as it is, has always been overshadowed by Kubrick’s more famous pictures: 2001: A Space Odyssey, The Shining, A Clockwork Orange, Dr. Strangelove, Lolita, Full Metal Jacket, etc. The Killing is a top notch crime thriller and true to the film-noir style, even coming out late in the style’s classic run through the 1940s and 1950s. It is one of the best heist pictures ever made and like John Huston’s The Asphalt Jungle, it helped create a lot of tropes used in heist pictures since its time.

Being a fan of Elisha Cook Jr. for years, I especially love this film because he gets a really meaty and pivotal role. He is one of the top character actors of his day, was in more noir pictures than I can count and even went on to some well-known westerns and popped up in a few Vincent Price horror movies. He really gets to display his acting chops in this and it is nice to see the guy’s range, as he was a more capable actor than one being relegated to playing background characters and bit players.

The Killing was an incredibly important film in the career of Stanley Kubrick, as it lead to bigger things. He would go on to do Paths of Glory and Spartacus and eventually start making more artistic films that changed the filmmaking landscape forever. The Killing was a big part of Kubrick’s evolution and thus, the evolution of motion pictures in general.