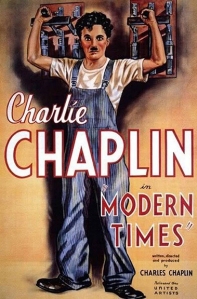 “[from the Telescreen in the restroom to the factory worker] Hey! Quit stalling, get back to work! Go on!” – President of the Electro Steel Corp.

I’m going to start this by saying that Modern Times is one of my two favorite Charlie Chaplin films. The other is City Lights and it’s hard to put one of these over the other. But this may have a bit of an edge, as I think the factory worker sequences are Chaplin’s best.

This film covers a lot of ground, narratively speaking, for something that’s less than 90 minutes. But in the time that this came out, it’s much longer than most of the Chaplin films before it.

It starts with the Tramp character working in a factory, as the film rolls on, we see him start to break down and eventually go a bit crazy. He’s institutionalized, gets cured and then hits the streets trying to rebuild his life. Along the way, he meets Paulette Goodard’s Ellen, a bit of a troublemaker but her shenanigans are because she’s trying to feed her hungry siblings.

A romance develops and the chemistry between Chaplin and Goddard is pretty natural but maybe we were seeing them actually fall in love, as the two were married for a few years after this picture.

Chaplin really does give one of his best performances here and the stunts were some of the most creative and impressive. While it seems to be going for more of a straight comedy route with the gags than trying to wow us with Chaplin’s resilient physicality, it doesn’t feel like that stuff is lacking. And his routines here are still impressive.

For instance, the balcony roller skating scene is more nerve wracking than physically impressive. But stuff like this isn’t less effective or more effective than Chaplin’s more physical slapstick. I guess that he proved that he didn’t need to beat himself up to still get audiences to love him. Plus, by 1936, that stuff may have been taking a real toll on his body.

Modern Times is a sweet movie that features one of the most beloved film characters of all-time. What’s not to love? This is one of Chaplin’s greatest films and for good reason. 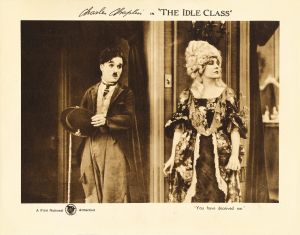 “I will occupy other rooms until you stop drinking.” – Edna, Neglected Wife

I had never seen this short by Charlie Chaplin until now. He has so many films and seeing them all is a big feat. Well, seeing the ones that have survived and not been lost to time.

I had no idea that this had a bunch of golf gags in it, which was really amusing and cool to see done in the Chaplin style.

There are a lot of gags and stunts that are incredible to watch, especially today when most of these stunts would be achieved by using CGI or green screens. This almost plays like a 1920s Caddyshack. Granted, there isn’t a gopher. But come to think of it, Chaplin versus the famous gopher would have been comedy gold.

Anyway, the biggest narrative focus in this film isn’t golf itself but about Chaplin’s Tramp character crossing paths with the richer class. This isn’t a new shtick for him, as the Tramp often times finds himself in these situations but with Chaplin, it’s the gags that make the movie and this one doesn’t disappoint.

The Idle Class isn’t a classic like City Lights but it is a strong and effective outing for Chaplin that only served to keep propelling his career forward.

Rating: 7.25/10
Pairs well with: Other Chaplin pictures during his run with First National: A Dog’s Life, Shoulder Arms, Sunnyside, The Kid, Pay Day, The Pilgrim, etc. 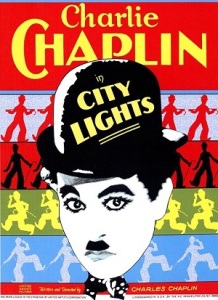 When this film came out in 1931, Hollywood had embraced sound. The silent era was quickly dwindling away but Chaplin stuck to the cinematic style that made him famous, keeping this a silent picture despite the film industry’s technological shift and the public’s demand for “talkie” pictures.

Charlie Chaplin, alongside his leading lady Virginia Cherrill, proved that you didn’t need sound to tell a compelling story and that they could convey immense emotion through their acting.

In fact, the final scene of the film is considered one of the best acted scenes in the history of film. In 1949, critic James Agee called it the “greatest single piece of acting ever committed to celluloid.” Not a bad outcome, especially considering the rocky behind the scenes relationship of Chaplin and Cherrill.

In the story, Chaplin returns as the Tramp character. He falls in love with a blind flower girl (Cherrill) and also befriends a rich drunk (Myers), who he saves from suicide. Over the course of the film, he tries to win over the flower girl and when he discovers her financial woes, does whatever he can to try and help, displaying the selflessness of his character.

At one point, the Tramp goes as far as competing in a boxing match to try and get enough money to pay the girl’s rent so that she and her grandmother won’t be evicted. Even though he finds himself in over his head in many situations, this is the sweetest that the Tramp character has ever been.

Ultimately, he goes to jail but not after he gives enough money to the girl to not only pay her rent but to afford her the expensive surgery she needs to get her vision back. After he gets out of jail, months later, we are treated to one of the best endings in the history of cinema.

City Lights is so superbly acted that there really isn’t anything else like it, especially considering that it was a silent picture that came out after its era. It is a perfect balance of the type of humor you’d expect from Chaplin while being a real romantic drama that packs a lot of emotional weight.

It was also the first film scored by Chaplin and the music is pretty close to perfect, especially the flower girl’s theme that was composed by Jose Padilla (he actually successfully sued Chaplin for not being given credit for his contribution).

City Lights is a phenomenal work of art that was directed by, starred and composed by one man, a true auteur of his and any era. 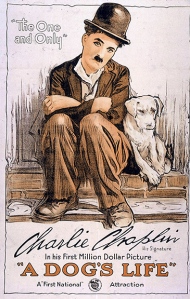 A Dog’s Life is a pretty notable film in Charlie Chaplin’s long career. It was his first picture with First National, who would go on to distribute other Chaplin films, as well as a slew of others during the silent era before being absorbed by Warner Bros. in 1929. Also, this film features several of Chaplin’s regulars in various roles. And even though Chaplin was the star of the picture, he played second fiddle in the title behind “Scrappy”, a dog who was the actual hero of the story.

While this film is quite short, it is a quintessential Tramp movie. It focuses on that character, Chaplin’s most famous, and has some of his best gags.

The film, like most of the ones featuring the Tramp, is more a series of gags and funny scenarios strung together with a simple narrative. In this picture, the Tramp falls head over heels for a singer in a dance hall. He also has run-ins with the law and the staff at the dance hall that employs the apple of his eye. With the Tramp is his faithful dog Scrappy, who helps him avoid trouble and ultimately, helps the Tramp achieve a happy ending with his love.

The scene in the film where the Tramp hides the dog in his pants, only to have its tail stick out of his backside and wag, is one of my favorite Chaplin bits of all-time.

While I love most of Chaplin’s work, A Dog’s Life had me laughing pretty much from start to finish. And frankly, I love the short Chaplin pictures for their simplicity and ability to quickly get into the groove and maintain it.

A Dog’s Life ranks up there as one of the best Chaplin pictures for me. If you want a real treat, check out a compilation film called The Chaplin Revue, which features this and a few other shorts edited into a feature length presentation.