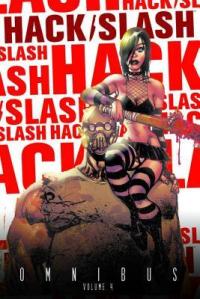 It has been a really long time since I first picked up Hack/Slash and even though I’ve read through the first three omnibuses a few times, I hadn’t picked up the fourth and fifth until recently.

I forgot how much I enjoyed this series. It’s perfect for fans of ’80s era slasher films and it brings me right back tot hat special place where I was a young kid perusing the aisles of mom and pop video stores looking for the next low budget slasher flick.

Where something like this could easily run its course and get repetitive, Tim Seely keeps things fresh and new and knows how to write complex and interesting characters.

The stories in this collection start to steer the series in new ways. Cassie decides that her and Vlad need to go it alone, as all their allies are constantly in danger due to their association. Also, we learn much more about the Black Lamp Society and Samhain. Additionally, some of the classic villains from earlier stories start to return to be thorns in Cassie and Vlad’s sides.

I wasn’t sure if this collection would have any cool crossovers in it and they don’t come till the end. There is a really well done crossover with Victor Crowley of the Hatchet film series. That one is then followed up by a crossover with Zombies vs. Cheerleaders, which I don’t know much about but it is a comic series and a card game. I’ll check out some of the comics in the future.

I liked the stories collected here and things felt new again with some of the narrative shifts.

Rating: 8/10
Pairs well with: The other Hack/Slash omnibuses. But They should be read in order.

I never watched Hatchet or any of its sequels until this past weekend. I heard good things and they star Kane Hodder (the longest running actor to play Jason Voorhees in the Friday the 13th films) as the monster Victor Crowley. These films also star a plethora of other horror icons. The series grabs actors from the A Nightmare On Elm Street, Halloween, Texas Chainsaw Massacre, Candyman and Gremlins franchises. I’m sure I’m leaving some out as well.

Let me analyze each film in this trilogy separately. 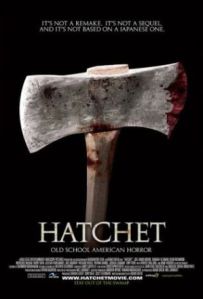 The first film is enjoyable. Although these movies are supposed to be homages to the great slasher films of the 80s, they feel more like homages to the late sequels of those films. What I mean, is that this movie plays like the fifth film in a slasher franchise, where plot doesn’t matter and things are just violent, insane and way more over the top than normal.

Hatchet follows a group of people on a haunted bayou boat tour outside of New Orleans. The boat crashes, the people are stranded and our brutal beast of a killer literally rips them apart.

While this is considered part of the slasher sub-genre of horror and Victor Crowley is seen as a slasher, he tends to rip off arms and pull people’s heads apart, as opposed to stabbing people with knives or using machetes. Granted, he does use some tools here and there, but he has the tendency to mutilate his victims with his bare hands.

The ending is horrible, by the way. The film just cuts off. But it isn’t so bad, if you immediately watch the second film, which starts right where this one ends. 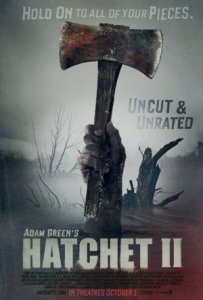 “Come on, you hatchet-faced fuck!” – Bob

The second film is more of the same. It also continues into the next day following part one. Also, the main girl is suspiciously different looking. Oh, she’s now a different actress – Danielle Harris from Halloween 4 and 5, to be exact.

The sole survivor of the first movie, the new actress playing the old actress, returns to New Orleans to get answers regarding Victor Crowley. She then immediately heads out with a clueless posse to hunt him down because why the fuck not?

This one gets more insane than the first installment and is a lot bloodier and ridiculous. There isn’t a whole lot more to add really. 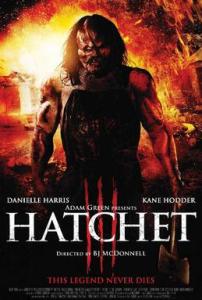 “I’ve seen some crazy shit, man. I was working on an Asian male; head severed off, uh, leg cut off below the knee. I’m telling you, man… He looked kinda like you, man.” – Randy

Like its predecessor, this one starts immediately where the last film ended. Basically, these three films happen over the course of three consecutive nights.

There is more splatter, more horror icon cameos but we are essentially just watching a single four and a half hour film instead of three separate movies.

Like the other films, this one ends somewhat open ended. I can only assume there will be a fourth chapter in the future.

These aren’t great movies but they are worth a watch and an entertaining way to kill a few hours. I don’t know how driven I will be to ever watch them again but I would check out another sequel. But I doubt that I would ride this out for ten films like Friday the 13th.