“Junior’s getting worse, we can’t even figure out what he did to that dog!” – Ben Healy

This is not a bad film in spite of it’s 4.9 out of 10 on IMDb, it’s just a film made for its audience, which isn’t made up of many people, especially nearly thirty years later.

This is a goofy, crude comedy but it’s that type of crudeness that worked really well for me when I was a kid. Even know, it’s over-the-top moments like the carnival ride vomitpocaplypse still play really well. It’s intentional hokiness is still funny. In fact, I was actually impressed by it, seeing it all these years later, as I couldn’t believe how far they pushed the bar and how much time and effort went into that massive gross-out gag.

The story is also good in that it isn’t really a re-tread of the previous film. Sure, at it’s core it is primarily about a kid that likes to be a total dick but it introduces a good foil for him. It also changes the setting, focuses a lot on John Ritter’s Little Ben looking for a new woman and it also focuses on the importance of family and friends.

Plus, I absolutely love Jack Warden and Gilbert Gottfried in these movies and they give us some really good shit, here.

Problem Child movies are simple, mindless, fun films. This one is no different in that regard. I think it lacks some of the heart of the original but the end sort of pulls you back in, as the characters you care about seem to find what they were looking for and what they need.

Ultimately, these weren’t movies that were made to be classics, they were just made to entertain people in a time where everything wasn’t offensive and we could laugh at bonkers, absurd shit.

The film is juvenile but it’s supposed to be. Back in the day, that worked for me. Seeing it now, it still works, as it brings me back to that place. But with that being said, I wouldn’t expect this to mean much to a person watching it for the first time in 2020.

Rating: 5.5/10
Pairs well with: its predecessor and crappy sequel. 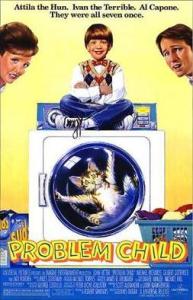 This is another movie I liked a lot as a kid. However, I didn’t think that I’d enjoy it as an adult. I was wrong.

Problem Child weirdly impressed me, as there is real heart to the story when you look past all the absurdity and goofiness of the picture. Sure, it’s hokey, cheap and what many would consider low brow but it’s also a really human story about a terror of a kid that just never knew love and finds it in the one person that truly doesn’t want to just throw him away.

The film is also infinitely made better by just how good the entire core cast is.

John Ritter was perfect as the all-American guy that just wanted to be a dad and was willing to take this kid in and try to be a good father figure to him in spite of the kid’s antics and terrible track record.

Amy Yasbeck was superb as the mother character, who didn’t really want the kid as much as she wanted the neighborhood status that came with being a middle class suburban mommy.

We also get Jack Warden, as the asshole, selfish grandfather that cares more about his mayoral campaign than his family, and Michael Richards, as a deranged serial killer that the kid idolizes and wants to run away with. Gilbert Gottfried also shows up in a few scenes and he’s perfect, simply playing himself in the most Gilbert Gottfried role of all-time.

I was really impressed by Michael Oliver as the kid, though. He’s just a natural when it comes to comedy, timing and facial expressions. He also has a great, evil laugh that makes his character even better. Most kid actors wouldn’t have been able to do half as well as he did and I’m surprised that he didn’t do much beyond the first two Problem Child movies.

On the surface, this is a cheap comedy that is mostly just a series of gags with a thin narrative holding it all together. However, within that thin narrative, the movie still finds a way to connect with the audience in an emotional way. It’s kind of cool, actually, as it keeps this from being just some outdated, pointless, crude comedy relic.

Rating: 6.25/10
Pairs well with: its sequels, as well as UHF for some great pre-Seinfeld Michael Richards shenanigans. 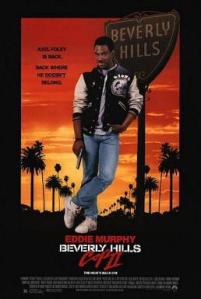 “[to Rosewood and Taggart] “If you get your head out of your ass long enough”? “Kiss my ass”? You’re gettin’ more and more like me every day. Next thing you know you’re gonna have Afros… big dicks and all!” – Axel Foley

Let me start this review by saying that the first movie is a better film. However, I always enjoy watching this one more, despite its total lack of a Bronson Pinchot cameo. But I’ll explain why I like it more, as I continue on.

To start, this chapter in the franchise takes things to another level in nearly every regard.

All the characters are better here and it almost felt like the first film was there to get them comfortable in their roles before they really gelled as an ensemble. I absolutely love the chemistry between Foley, Rosewood and Taggart. They just know each other so well and they compliment one another perfectly.

I also love how these characters have evolved. Axel is still pretty reckless but he’s more mature and just comes across as a much better and more gifted detective. Rosewood has essentially become this franchise’s Eugene Tackleberry and because it’s Judge Reinhold, it makes that all the more better and funnier. Taggart has warmed up to Foley a lot more and now there is a level of respect and true friendship between them. Even though Ronny Cox is barely in this, as he spends most of the film in a coma, it’s great seeing him get to share scenes with the other guys once he’s recovered.

Additionally, I really like Brigitte Nielsen in this, which I would consider her best role after Red Sonja. But it’s like this role was specifically written for her and it highlights her strengths without exposing her weaknesses. She’s just a badass with a unique look and you actually see her as a legitimate, dangerous threat. She’s cold, calculating and just about perfect.

The other villains feel weak by comparison and without Nielsen being added to their roster, they don’t hold a candle to how solid Steven Berkoff and Jonathan Banks were in the first movie. But I should also point out that I liked Dean Stockwell in this as an evil shithead, even if he was underutilized for his talent level.

The criminal scheme in the movie starts out with a bang but as it becomes clearer, it is kind of underwhelming. But it’s also secondary to the comedic momentum of the film.

That being said, when the action happens, it’s really f’n good. The movie feels more chaotic with bigger vehicle chases, bigger shootouts, bigger weapons and having the ante upped in nearly every regard in the action sequences.

Frankly, I love this movie and the first two in the franchise are classics. The third (and final) film, not so much. But I’ll get to that one in the very near future.

Rating: 8.75/10
Pairs well with: the other Beverly Hills Cop movies, as well as the 48 Hours and Lethal Weapon films.