“No, I don’t think I will kiss you, although you need kissing, badly. That’s what’s wrong with you. You should be kissed and often, and by someone who knows how.” – Rhett Butler

Gone With the Wind is considered one of the all-time greatest motion pictures ever made. However, everyone should already know that.

It also came under fire last year when it was announced that it would be featured on HBO Max. Why did it come under fire? Well, because people these days are offended by the art people made generations ago. In regards to this film, it had to due with racial stereotypes and how the black characters were used. I wrote about this retro-censorship crap back in July, though. That article can be found here, so I won’t harp on it too much again while reviewing this classic.

When it comes to this film, it is as good as people have made it out to be for over 80 years. In fact, it may be even better.

Sure, it’s a long, slow, very drawn out story but it covers a lot of ground and it certainly has a lot to say.

Women, historically, have loved the film because of its romantic side and how it doesn’t follow the beats of a stereotypical “happily ever after” story, which was definitely rare for its time.

Men seem to love it because of the war related parts of the film. Mainly, this picture focuses on a few key characters but it really showcases what life was like for those on the losing side of the American Civil War. Regardless of what the war was or was about, the message here is eternal, as it really gives the viewer a true understanding of the actual devastation of war, specifically after the fighting is over.

Beyond the great story, the movie has stunning and legendary performances throughout and it may be the best acted film up to its release. Clark Gable is an absolute man’s man and Vivien Leigh was absolutely incredible. The range of these two just in this film is fantastic and impressive.

The film is also superbly directed by Victor Fleming, who pulled these performances out of his cast while also displaying his phenomenal level of cinematic craftsmanship. Some of the shots in this are breathtaking and still hold up marvelously, all these years later. A lot of credit also has to go to the cinematographer, Ernest Haller.

Going back to Fleming, though, it’s hard to believe that he released both The Wizard of Oz and Gone With the Wind in the same year! That has to be the greatest single year of work by any director. Sadly, though, he only made five more films after this and died ten years later.

It’s hard to really put into words how majestic and epic this film is. It really should be seen by all lovers of film. I can get why it might not appeal to many in the 2020s and because it’s so damn long but it’s hard to really experience the best that the art of motion pictures has to offer if you haven’t seen this.

It deserves its status and from a visual and storytelling standpoint, it still has a lot to teach future filmmakers and lovers of the artistic medium.

“How about you slip into something more comfortable, like a few drinks and some chinese food.” – Harry Prebble

Man, Raymond Burr is in so many noir pictures. I really enjoyed him in this one, even if he does meet a quick end, being the murdered victim that sets the story in motion. Regardless, it was nice seeing him not play the evil heavy for once.

The star here though, is Anne Baxter, an actress who I am really starting to appreciate more, as I discover a lot of her old films. When I was younger, I really only knew her as Egghead’s (Vincent Price) criminal girlfriend Olga, Queen of the Cossacks on the 1960s Batman television series.

She also shares a lot of time on screen with Richard Conte, a guy I like, who shows off his charisma in this. You also get a small part by Superman himself, George Reeves, and a musical cameo by Nat King Cole.

The film is directed by the magnificent Fritz Lang and even though it goes to serious and dark places, it isn’t a film devoid of lightheartedness and plays like a comedy, at times. The opening of the film is quirky, as we see the life of Anne Baxter’s Norah and her roommates.

In this film, Norah is dumped by her G.I. boyfriend through a letter. She then decides to go out with the flirtatious Harry Prebble. They have a good time, she ends up at his home and later wakes up hungover. However, during her blackout, Harry was murdered. Norah is the prime suspect as some of her personal effects were left behind in Harry’s apartment. She has no memory of what happened but we’re pretty sure she didn’t do it. The rest of the film follows her on the run, trying to get help from a media personality (Conte) and evading the police until everything is properly sorted out.

This isn’t a noir with a lot of twists but it has just enough to keep things interesting. Noir pictures could often times get over complicated and convoluted but this is almost like noir light.

The Blue Gardenia is a fun movie. Sure, it’s dark and it involves murder but it doesn’t become as dreary as the cinematic style typically suggests. And maybe, by 1953, Fritz Lang was tired of doom and gloom and wanted to craft something a little more upbeat and playful.

“[about the bullet holes in George Reeves’ floor] Since when do suicides miss twice and start over?” – Louis Simo

This film really grabbed me immediately with the opening theme, which set the tone perfectly for this film-noir styled biopic about the death of George Reeves, the actor who was most famous for playing television’s Superman in the 1950s.

Ben Affleck plays the legendary George Reeves but he is not the main character. Adrien Brody gets the big spotlight in this one, as he plays a private investigator hired to uncover the truth surrounding George Reeves apparent suicide.

This is a very layered film, in the same vein as a classic film-noir, and it features a large cast of characters.

Brody commands your attention as Louis Simo. He exudes charisma and weaves his way through this tapestry with ease and a real air of confidence missing by most actors these days. Brody, as well as Affleck, almost feel overpowered though by the performance of veteran Bob Hoskins, who enters each scene with an aura of intimidation like a massive storm cloud ready to strike out with booming thunder.

Diane Lane puts in a solid performance as well, as do most of the ladies here. It was cool seeing Molly Parker banter with Brody. Robin Tunney and Kathleen Robertson both brought their A-game performances, as well. I wish we got to see more of Robertson, as she’s never quite broken out as a leading lady. Here, she shows that she has got more to offer than just being one of Ian Ziering’s girlfriends from the original Beverly Hills, 90210.

While this wasn’t an exceptional film, it did paint an intimate portrait and it handled the George Reeves situation with care and grace. There were a lot of shady things that happened in his life but the film felt honest and respected the man, even while displaying those flaws. Superman isn’t real and the man was just as human as all of us.

The film feels like it is missing something though. Maybe it’s the fact that it built up towards a resolution but we never really got there. Not in a proper narrative sense, anyway. By the time the credits roll, you’ve been taken on a ride but it just feels like a collection of scenes that don’t reach a solid conclusion.

I like Hollywoodland despite its flaws, in the same way I appreciate George Reeves despite his. It doesn’t fully hit the mark but it does connect with you emotionally and then lingers long after the final scene. In that sense, it is an effective movie. 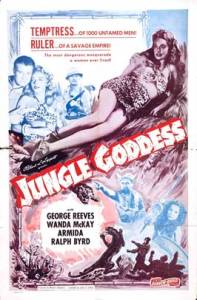 For a movie that stars Superman and Dick Tracy, this thing is a big letdown!

George Reeves and Ralph Byrd team up alongside Wanda McKay and give us something that’s not really worth anyone’s time. This was featured in the second season of Mystery Science Theater 3000 and for good reason: it’s horrible.

The story sees the two men go into the wilderness of Africa to find a rich heiress whose plane went down. When they do find her, she’s leading an African tribe but in reality, wants to escape the jungle and go back home.

The film is bizarre in that it crosses over between a Tiki vibe and a safari vibe. It should be a safari type film due to its location but its seems like the set designers couldn’t tell the difference between an African style and what looked more at home in the South Pacific. Additionally, many of the tribesmen looked like Pacific islanders and dressed that way. At least the heiress had some leopard print on.

Jungle Goddess is a dumb movie. It is painful to watch. I can’t imagine anyone even finding this remotely entertaining in 1948.

The film is a train wreck of bad editing and stock footage that doesn’t match up. It is topped off with over the top acting and a horrendous script.

When run through the Cinespiria Shitometer this comes out as a Type 5 stool, which is defined as “Soft blobs with clear-cut edges (passed easily).”

*I couldn’t find a trailer, just the MST3K version of the film.