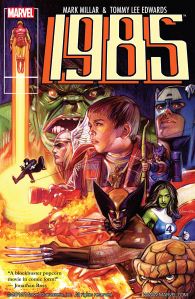 This comic book was cool as hell!

It sort of reads like it’s a season of Stranger Things but where the small town is haunted by Marvel villains instead of weird shit from the Upsidedown. This also came out in the decade before Stranger Things, so it was kind of ahead of the curve but like Stranger Things, knew how to tap into ’80s nostalgia in a brilliant way.

But this was also written by Mark Millar, a true master of his craft.

What’s unique and cool about this comic is that it doesn’t take place in the Marvel Universe, it takes place in our universe.

The story follows a young boy in 1985. He is having issues like any normal ’80s kid dealing with divorced parents. He bonds with his father pretty strongly though, as they both have a deep love of comic books and are experts on Marvel lore. At the same time, Marvel villains start showing up in the real world because there are no heroes here to stop them.

Overall, this was a really neat idea and for the most part, I thought it was superbly executed.

1985 is incredibly imaginative but it really worked so well because the art fit the concept and the tone. While Millar deserves credit for a great story, Tommy Lee Edwards gave it so much more life than just words on paper. And his style works better for the setting than having that sort of standard Marvel art style.

This is one of those comics that I’m happy to have discovered as an adult but wish would have been around when I was a kid. If you know a kid that loves Marvel but they’ve never read this, I think that they’ll probably love the hell out of it.

Rating: 9/10
Pairs well with: the Stranger Things comics, as well as other Mark Millar stories. 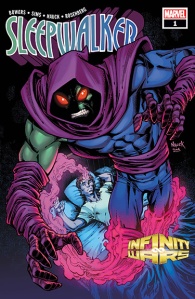 Sleepwalker was a comic book series that I was a big fan of in the early ’90s. I know that most people didn’t read it and a lot of people I have brought it up to over the years barely remember it. But I was always fond of the character and thought that the lack of his appearances over the last twenty years or so, has been a wasted opportunity by Marvel.

That being said, while I haven’t cared much for the Infinity Wars mega crossover event that is going on, I had to add a new Sleepwalker book to my pull list. And I really hope that this leads to the character being used more often, even though I’m pretty sure that this comic’s sales are far from great.

This ties in directly to the events of Infinity Wars but you also don’t need to read that in order to follow this. The only thing you probably need to know is that instead of Thanos wiping out half of the life in the universe, this time his daughter has the power of the Gauntlet and has mashed up all living beings so that two people are now merged into one. I guess it doesn’t really kill anybody but it still makes the population of the universe half of what it was. It’s a weird concept and I don’t like it but it has created some mashup heroes like Ghost Panther, Iron Hammer, Solider Supreme and Weapon Hex, just to name a few. In this Sleepwalker series we do get a cool mashup of Fin Fang Foom and Man-Thing.

The story was enjoyable and I certainly liked it more than the actual Infinity Wars event but I felt like it could have been fleshed out more and expanded on over more than four issues. But being that this is part of a crossover event, it is just one spoke in a wheel and that wheel has to keep rolling. Still, this miniseries could be a decent jumping off point for more Sleepwalker comics in the future. At the very least, maybe we could see him join a larger ensemble.

I thought the art was pretty good and better than a typical Marvel book in 2018.

But really, all this did was whet my palate and then it was over. I hope I don’t have to wait another ten to twenty years for one of my favorite ’90s creations to return.