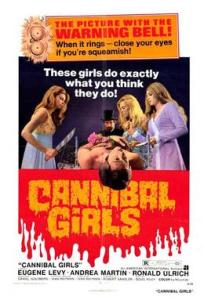 Strangely, I didn’t know about this movie’s existence until a few years ago. The reason I find that strange is that I’m a fan of Ivan Reitman’s work and I also really loved SCTV and that group of Canadian comedians.

I also find it odd that Reitman did a cannibal movie that starred two major players from SCTV before any of them had any real notoriety. As one might expect, this isn’t just straight horror and it sort of parodies the cannibal and gore movies that were popular with audiences of exploitation film.

All that being said, this was a cool experiment. It didn’t hit it out of the park or leave much of a mark but it was one of the very first steps in the careers of three talented people.

Now compared to the things it parodies, this is pretty light on gore. It’s more about capturing the same sort of vibe but having some cheekiness thrown in. It still has a gritty and brooding atmosphere that definitely feels authentic to the time.

However, also like the films it is channeling, it’s also mostly dull. While the black comedy sort of makes up for the lack of real exploitation, it isn’t enough to carry the picture or really salvage it.

Although, I liked seeing Levy and Martin play characters that were somewhat serious. They hadn’t quite grown into decent actors by this point but they are the best actors in the picture.

Reitman would go on to make some of the most memorable comedies of all-time but he was very raw as a director here. The film feels very green and there are some noticeable issues but to be fair, this was also better than similar films that lesser directors put out that wouldn’t go on to do anything worthwhile after starting in schlock.

This really isn’t a blip on the radar when looking back at exploitation cinema but this is something worth checking out just to see some of the earliest work by Reitman, Levy and Martin.

Rating: 5.25/10
Pairs well with: the exploitation films it sort of parodies: Blood Feast, The Organ Grinders and The Wizard of Gore. 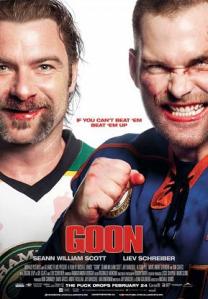 “You have my respect. Whatever that means to you, you got it. But, know this shit hard. If ever there comes a time when it gets down to the marrow, and it’s you and me. Kid, I will lay you the fuck out.” – Ross Rhea

Goon is the best hardcore hockey film since the Paul Newman classic Slap Shot. And to be honest, as a fan of hockey, movies and testosterone, I think that Goon is either on or pretty damned close to the Slap Shot level.

Written by Jay Baruchel (who also stars in the film) and Evan Goldberg, this is a movie that lives up to their previous collaborations and their great individual efforts. It also provided Seann William Scott and Liev Schreiber with the two best roles they’ve played. In fact, I would be all for a spin-off about Schreiber’s character, the veteran goon Ross Rhea.

Actually, the scene in the bar between Scott and Schreiber is one of my favorite verbal confrontations ever filmed. The mood, the lighting, the lines spoken and the chemistry between the two men in just that one scene, elevate this film to something much more than a late night sports comedy. Kudos to both actors.

This is a quick paced and never boring 90 minute mixture of bad ass hockey shit, lighthearted adult comedy and just a really compelling story about a lovable tough guy that just wants to find something in the world that he is good at. It is about a guy who wants to belong somewhere.

The final confrontation in this film is also a pretty epic scene. The film builds towards the inevitable battle between the two toughest guys in minor league hockey and when it finally goes down, it makes the three hour battle that is The Return of the King look like Strawberry Shortcake.

This film is great. I can see where it wouldn’t be many people’s cup of tea but fuck people and fuck tea.