“[talking to a she-vampire] I’d rather Crazy Glue my dick to the bullet train than fuck you.” – Rafe Guttman

I recently revisited Tales From the Crypt‘s Demon Knight. So I figured that I’d also go back and revisit Bordello of Blood. I remember not being as fond of this as I was Demon Knight but hey, it’s got Corey Feldman as a vampire in it, which is probably something that every teen girl wanted to see since The Lost Boys came out. I’ve never been a teen girl but I did like The Lost Boys and Corey Feldman.

This also has Dennis Miller in it as Dennis Miller. Well, not really. Miller always seems to play some version of himself though and here, he is Dennis Miller as a private eye trying to woo Playboy model Erika Eleniak. His character’s name is Rafe Guttman, which seems fitting for a Miller character.

Probably the real highlight from a casting perspective is Chris Sarandon, who was a fantastic vampire in the classic Fright Night. Here, he isn’t a vampire he is a guitar-wielding rock star televangelist that runs a megachurch but is somewhat responsible for the vampiric activity in the film. Sarandon plays such a kooky character in this and he’s simply great.

The story was penned by Robert Zemeckis and Bob Gale, the guys behind the Back to the Future movies. This is nowhere near the greatness of those films but it is a fun and entertaining movie.

I don’t think this is as good of a picture as Demon Knight but that is mostly because this doesn’t even come close to the level of insanity and intensity that we got in that film. This movie is crazy and has some nice gory bits but Demon Knight was batshit crazy, where this is just more of a wild ride.

This is definitely worth a watch if you’ve got ninety minutes to kill and just want some dumb, mindless, badass fun in your horror. It’s certainly a product of the ’90s and fits well within the Tales From the Crypt franchise.

Rating: 7/10
Pairs well with: Anything related to Tales From the Crypt. 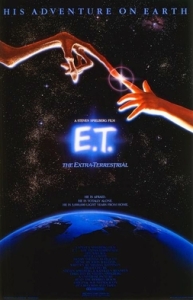 E.T. the Extra-Terrestrial is hands down, one of the greatest films ever made. I just saw this on the big screen, although it is the third time I have seen it in its proper format. This was the first time, however, that I got to see the original version in the theater. The other two times, it was that special edition that had unnecessary bonus scenes and for some stupid reason, removed the cops’ guns and replaced them with walkie talkies. Finally, I got to see the original unaltered version in all its glory.

It doesn’t matter how many times I see E.T., each time it hits me the same way. It is emotional and real and its effectiveness has not worn off in the thirty-five years since it was first released. That is a testament to just how perfect this motion picture is. It is also a testament to how great of an actor Henry Thomas was, as a kid, as he carried the massive weight of this picture on his back.

Watching E.T. in the theater, and seeing how today’s kids responded to it, showed that it isn’t a generational thing, it transcends all that, as happy parents got to share something with their kids, who all seemed to be truly effected by it. And while sitting there, unable to stop myself from smiling as soon as the movie kids took to their bicycles to outrun the police, I came to the realization that no matter how hard filmmakers try, no one makes movies like this anymore. Sure, we have strong summer blockbusters, here and there, but nothing that has a lasting impact and carries so much emotion with it.

E.T. the Extra-Terrestrial is truly the measuring stick. Yes, I like other big summer movies more but E.T. did so much more with a lot less, compared to films like Star Wars and Raiders of the Lost Ark and certainly more than The Avengers and Transformers. It didn’t rely on being cool and having over-the-top action, adventure and effects. It has great effects on a smaller scale but it just goes right for the heart and grabs it. In reality, George Lucas inspired countless filmmakers and writers but Star Wars didn’t hit people right in the feels like E.T. did. You certainly won’t feel a tenth of the emotion of this film with Captain America: Civil War.

Some people may just go to big summer movies for endless explosions and robots dancing because they’re too afraid to feel emotional in front of their dude brahs or babes. But when a film can go beyond some simplistic bullshit and find a way to resonate within its audience, there is something really special about it. I didn’t see droves of kids leaving the theater begging for toys. I saw little faces that looked like some sort of switch flipped in their little heads. Did these raging, self-absorbed toddler terrorists somehow experience empathy?

While this is a review of E.T. the Extra-Terrestrial, I don’t feel like I need to rehash the plot or talk about how amazing ever little piece of the film is. I assume that mostly adults read these reviews and frankly, I have to assume that nearly everyone has seen this film and gone on to understand its greatness and importance. If you haven’t, that is an injustice that needs to be rectified.

E.T. the Extra-Terrestrial is a masterpiece. Well, as long as you don’t watch the stupid special edition.