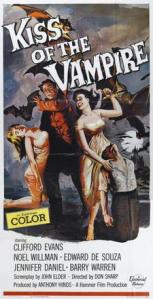 “When the devil attacks a man or woman with this foul disease of the vampire the unfortunate human being can do one of two things. Either he can seek God through the church and pray for absolution or he can persuade himself that his filthy perversion is some kind of new and wonderful experience to be shared by the favoured few. Then he tries to persuade others to join his new cult.” – Professor Zimmer

Man, this was a really solid Hammer vampire flick and even though I saw it years ago, I didn’t remember it being this good.

The story follows two newlyweds traveling for their honeymoon. They end up in a small Bavarian village in 1910. While there, they come to discover that the people are a bit off. As the story rolls on, we come to learn that the small community is being controlled by a vampire cult that lives in a nearby castle. The cult tricks the newlyweds at a party and abducts the wife, trying to make the husband believe that he arrived there alone. The husband then teams up with a Professor, who lost his daughter to the cult. The two men then seek vengeance against the vampires in an effort to save the young man’s wife.

For a Hammer film that doesn’t feature any of Hammer’s go-to big name actors, this is still on the level of those other movies. Clifford Evans and Edward de Souza had worked for Hammer before and they did hold their own without the help of Christopher Lee, Peter Cushing, Oliver Reed or Andre Morell.

This was directed by Don Sharp, though, and even if he wasn’t one of the top two Hammer directors, he did a good amount of films for the studio over his career and always hit the right mark, tonally and narratively.

This picture looks great but then again, all Hammer films of the 1960s did. It recycles some furniture and other set pieces but that kind of just adds to the overall appeal of the Hammer aesthetic.

Additionally, the climax to this film is superb and I dug the hell out of it. For the time, the special effects worked well and it was cool seeing these vampires meet a sort of ironic demise. 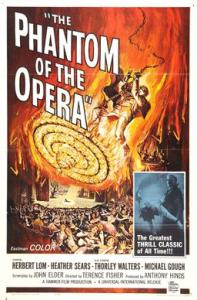 My memories of this film were much fonder than they probably should have been. Granted, I love Hammer horror, especially the films directed by Terence Fisher. Plus, this had Michael Gough in it and that guy’s typically fantastic.

I still like this film and I thought that the look of it was great and akin to what one would expect from a Hammer horror movie of this era. I also love the look of The Phantom and thought that his mask is one of the best the character has ever had in this story’s long history and countless adaptations.

My biggest issue with this film, though, is that it is really slow and kind of boring, as some segments just drag along at a snail’s pace.

Also, the alterations to the plot didn’t really seem to benefit the story and I have to question why this deviated so much. I mean, that’s something that Hammer did often, as they wanted to tell their own story while using these famous literary characters but The Phantom of the Opera is already a pretty one-note story with a pretty one-note monster. This is probably why there weren’t a slew of Phantom sequels in the classic horror runs of Universal Studios and Hammer Films, which saw several Dracula, Frankenstein and Mummy movies.

Still, this is a good, competent film. It’s just not Hammer or Fisher’s best and it sort of feels like it was half-assed at the production stage. Maybe Hammer kept striking oil with all of Fisher’s other films based on classic monsters and all parties involved just phoned this one in.

I used to think of this as one of my favorite film adaptations of the story but it doesn’t hold a candle to the Lon Chaney or Claude Rains versions.

Rating: 6/10
Pairs well with: other Hammer films of the late ’50s through early ’70s, especially those directed by Terence Fisher.