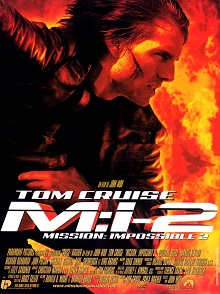 “[briefing his men] If you look at Hunt’s operational history, and I have, you’ll notice that he invariably favors misdirection over confrontation.” – Sean Ambrose

While I wasn’t a big fan of the first movie in this franchise, I have a much better opinion of it now. This film, however, is where I jumped off because it was terrible on just about every level. But recently I thought, maybe I’m wrong. Maybe this one will seem better to me now, all these years later, as it’s predecessor did.

Nope. This is still shit. And even though I haven’t seen a Mission: Impossible movie after this one, it’s hard to imagine the well-received sequels that followed being as bad or worse than this. Luckily, this one is checked off the list and I can move on from it.

But for now, I guess I still have to review it.

Tom Cruise is fine in this. In fact, he’s about the only thing that’s fine in it. I mean, I liked Anthony Hopkins, but he’s barely in it and Thandie Newton was okay but even with some talent in this picture, it isn’t all that well acted or treated like a movie worthy of anyone’s time or effort.

The plot is pretty fucking boring and derivative as hell. Honestly, this plays like a mediocre Pierce Brosnan era James Bond film and then just slightly worse. Granted, it isn’t as bad as Die Another Die, which just went to an absurd level of crazy. This is almost that bad, though.

The action is goofy and implausible, even more so than the first Mission: Impossible, which nearly jumped the shark a few times.

Additionally, this film was expensive but somehow it looks like a mid-’90s action movie with a moderate budget. While I like John Woo, generally speaking, this tapped into his frugalness too much. It felt like it was well beneath Face/Off, which came out three years prior. Yet, this film had a budget of $125M where Face/Off‘s budget was $80M.

Everything comes to a head in the shitty motorcycle chase finale that defies physics to the point where it broke my brain. I don’t care about it being directed by a Hong Kong action director, the regular Joe in the theater has no idea what that should entail and frankly, it’s not a style that works for this franchise, which is probably why it was abandoned after this movie.

M:I-2 is honestly just a stinky fart in the wind. Luckily, it didn’t completely derail the franchise and we got sequels, that I’ve been led to believe, are far superior to this one. I’ll probably start checking those out soon.

Rating: 4.5/10
Pairs well with: the other Mission: Impossible films, the Pierce Brosnan James Bond era, the Bourne film series and the Kingsman movies.