As I’ve stated just about every time that I’ve reviewed one of these Batman Arkham “best of” collections, I love these damn things. Each one focuses on a specific villain from Batman lore and, for the most part, collect the best stories from all eras of Batman comic book history.

Now while I did enjoy most of this volume, I can’t honestly say that these are the Penguin’s greatest hits. Some of the stories here were kind of drab and just from memory I came up with about a half dozen that were better than the ones collected here.

However, I think part of the problem is that they want to cover all the eras and most of the great Penguin stories I’m thinking of are from the ’70s and ’80s.

This still does a good job at showcasing the character and giving fans a peak into how he’s evolved over the years as times change and new writers have come and gone, most of them leaving their imprint on the character.

In the end, this is worth adding to your collection if you’ve also been buying every volume. However, I wish that DC would come up with a better and beefier collection to honor the longevity and greatness of this 79 year-old character.

From Comic Tropes’ YouTube description: Moon Knight has never been an A-list title. In fact, it’s a title that is regularly canceled and rebooted with a new creative team. But because it isn’t a top-seller, Marvel Comics allows it’s writers and illustrators to take more chances on it. This video goes over the changes each creative team made when they took a crack at Moon Knight.

Man, I didn’t know if the coolness of the first Moon Knight – Epic Collection could be topped but it was topped with this immediate followup that picks things up where that volume left off.

This installment all takes place within the original Moon Knight comic title, so it is much more fluid and less chaotic feeling than the previous book, which jumped around from multiple comic book titles, covering the earliest Moon Knight stories before he had his own series.

The vast majority of this is written by Doug Moench with the art handled by Bill Sienkiewicz. They were really the dream team for early Moon Knight and frankly, this is still my favorite era for the character in regards to story, tone and the incredible art by Sienkiewicz.

In fact, over these fifteen or twenty issues, you really see Sienkiewicz’s art evolve. He has the same sort of style but it develops more character and its own uniqueness that is very much Sienkiewicz.

Moon Knight was one hell of a dark comic for the time, being born out of the heyday of Marvel’s horror era of the ’70s and moving it forward into the ’80s.

My only real complaint about Moon Knight, as a character, is that his regular life was too complex in the earliest stories. Apart from the Moon Knight persona, he had three other identities. It’s kind of tedious and I think it created more problems than it needed to with narrative flow.

Regardless of that, this series, especially in this era, comes alive when our hero is in full Moon Knight garb, fighting some sort of monster or occult themed villain. And since this has a lot of that, it’s pretty f’n awesome. 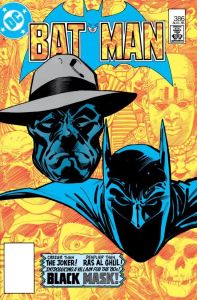 While I’m a fan of Doug Moench’s writing, especially on Batman, as well as being a fan of the Black Mask character, I had never read his first appearance, which also serves as his origin story.

Recently, I bought the comic, graded and slabbed to add to my collection, but I wasn’t able to read it due to it being near mint and inaccessible in its sealed case. So I bought the issue digitally, so I could at least enjoy the story inside.

While I know the gist of Black Mask’s origin, I was glad to see it fleshed out. While his backstory is pretty unique, it’s also overly complex and it’s kind of strange.

This shows how he has ties to Bruce Wayne and in some ways, Black Mask’s childhood association reminded me of Hush’s even though this came out nearly two decades before Hush’s debut. And Black Mask also doesn’t know that Bruce Wayne is Batman.

The story here is a multi-part arc, which is continued in Detective Comics before bouncing back to the following issue of Batman.

I didn’t read the whole arc, as I mostly just wanted to read his debut issue. Plus, all of this will most likely be collected in Black Mask’s Batman Arkham collection, which is slated to be released in a few months. And since I plan to buy that and review it, I’ll read the whole story there.

In the meantime, this was a pretty impactful debut, enhanced by the art of Tom Mandrake and Adrienne Roy.

Rating: 6.5/10
Pairs well with: other Batman stories by Doug Moench.

Killer Croc is a Batman villain that I have dug since I first read a story with him in it in the late ’80s. I’m glad that he has had staying power and is now pretty close to being an B+ level villain in the Batman and larger DC mythos.

This collection, like the other Batman Arkham villain compilations features a dozen or so stories focused on this specific character, all from different eras with a slew of different writers and artists.

But in the case of this book, that kind of hurts the overall compilation.

Now most of the writing is good with stories by Chuck Dixon, Doug Moench, Gerry Conway, Tim Seeley and others. It’s the big style variance in art that damages the overall presentation.

The problem is that most of the stories featured here are from the ’90s. At the time, DC Comics had a lot of artists that experimented with a lot of different art styles. Most of the stuff here looks like ’90s indie stuff that is trying way too hard to be edgy and extreme. A lot of it comes off like massive eye sores and the strong contrast in style from chapter to chapter is kind of jarring. But this is a compilation and these things happen when you’re wedging a dozen or so stories into the same book.

However, this collection also brings to light one of my biggest gripes about the Killer Croc character and that’s that everyone draws him differently. Sometimes he’s just a jacked dude with scaly skin and other times he’s the size of the Hulk with an actual crocodile looking head, snout and all. I’ve never been a fan of his inconsistent look and some of these artists go too wild with it.

Being mostly a product of the ’90s we also get some over the top violence in one story in particular, which sees Killer Croc literally chomp a woman in half. While that stuff doesn’t bother me, it seemed out of place in the book and just reminded me of a time when DC Comics seemed like they were trying too hard to fit within what they thought were the times.

I did enjoy this collection, despite my gripes about it. They could only work with what they had in their library but I can’t believe that some of these are considered the best Killer Croc tales. Maybe someone needs to step up and do the character some justice, treat him with care and give us something with more meat.

I also found it odd that none of his Suicide Squad stuff was here, as some of those stories really build up the character in interesting ways.

Now I say that these are focused on one villain but this installment is a bit different, as it features Clayface, which there have been multiple versions of over the years and all of them are pretty unique.

What I really loved about this is that it gives us the first appearances of every Clayface in regular Batman canon. Hell, it even gives us the story of the Mud Pack, which was a villain team comprised of multiple Clayfaces.

The Clayface that most people are familiar with is the original, Basil Karlo. He was the one featured in Batman: The Animated Series in the ’90s and has monopolized Clayface’s comic book appearances since.

However, I loved seeing all the different versions here. My favorite story and now my favorite Clayface is the third version a.k.a. Preston Payne. I knew of him but never got to read his debut until now. His look and armored suit were badass and his story was fantastic thanks to the great Len Wein. As much as I like Karlo, I’d love to see Payne make a real comeback.

Overall, this was a pretty cool collection. Most of these are stories I’ve never read but they also gave me better clarity on the bizarre history of the Clayface moniker.

Rating: 8/10
Pairs well with: Other Batman Arkham collections, as well as Clayface-centric stories.

I’ve always liked Moon Knight but I’ve never read his earliest stories. Being that a Moon Knight television show was just announced, I figured I’d go back and give his first few appearances a read.

He first appeared in a small arc in Werewolf by Night. This collection starts with that story and while its enjoyable in a ’70s Marvel horror pulp kind of way, the Moon Knight character still feels undeveloped.

The rest of this collection does a better job of expanding on him, as well as his trusty sidekick Frenchie.

As this rolls on, it gets more interesting but it doesn’t really find it’s groove until you get to the few issues collected here that were the start of the first ongoing Moon Knight series.

A lot of this is really great to look at and admire, especially the portions where the art was done by Bill Sienkiewicz. Plus, you really see his style evolve just in this short sample size.

This collection is also full of a lot of Moon Knight’s earliest appearances in other titles. There are stories with the old Defenders team, Spider-Man and The Thing.

I’d say that this was a pretty fun comic and it’s neat seeing Moon Knight in his earliest stages but I wouldn’t say that this is a must read. Moon Knight really didn’t hit its stride until his own series was rolling for about a year. But I think I’ll jump into those stories next, as they’re collected in a volume that follows this one.