“I just want total domination of one major American City! Is that too much to ask for? Is it? Is it? Huh?” – Guisman

So out of all the “terrible” video game movies of the ’90s, this is one I hadn’t seen until now. While I loved the Double Dragon video game franchise, I never wanted to see this after the trailer for it dropped back in 1994. It looked horrendously bad, poorly adapted and like a hokey, steaming pile of shit.

That being said, I did enjoy the hell out of this even if it’s a pretty shitty movie. I know that I would’ve hated it when it was current, however. Especially, because I loved the tone of the Double Dragon games and in that regard, this didn’t just miss the mark, it wasn’t even aiming in the first place.

The film is bad from top-to-bottom but some of the big action sequences are actually kind of impressive in regards to how well this made the most of a moderate budget. It was able to give us a cool boat chase scene with good pyrotechnics and action. Plus, some of the sets, as corny as they are, were fairly large and well designed for the bizarre world that this film takes place in.

Sadly, the special effects took somewhat of a budgetary hit in the poor use of obvious matte paintings and the giant rubber suit the Abobo actor was forced to wear.

Additionally, the acting is pretty damn bad but I’d be lying if I said I didn’t enjoy how over-the-top and hammy Robert Patrick was in his role as the villain.

To put it bluntly, this is a bad movie but it’s weird as fuck. I really enjoy weird movies and because of that, I liked this. That doesn’t mean that I’ll ever watch it again or give it a positive rating but I’ve enjoyed other films that were far worse than this.

Granted, I would watch a RiffTrax version of this movie if one exists. 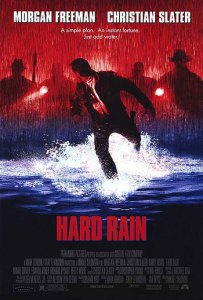 “Look! We just want the money! You guys can walk away, we won’t kill you!” – Jim

This film has more studios, distributors and countries involved in its creation than I have ever seen. Okay, maybe not ever but there is a whole shit ton of people behind this little action movie.

It also has a pretty big cast for a movie about a town vacated due to massive flooding. But the big cast of characters was actually a benefit as this movie has so many twists, turns and character morality shifts that at its core, this is very much film-noir.

Christian Slater plays an armored truck guard. He and his older mentor, played by Edward Asner, get stuck in the flood waters as they are transporting three million dollars from the small town’s bank to safety. They are quickly overcome by a group of thieves, led by Morgan Freeman. Asner’s character is killed in the initial confrontation but Slater escapes and hides the money away in a tomb. As the water rises further, Slater is on the run from Freeman’s gang, who have acquired boats and jet skis to more easily navigate the flooded city streets.

The town is also protected by a three man police force led by Randy Quaid. They seem like a heroic lot but as the film progresses and greed takes over the hearts of nearly everyone in the film, we see the worst come out in those tasked with keeping the peace.

Minnie Driver is thrown into the film because you need eye candy and someone for the hero to try and hook up with. You also have an elderly couple who stayed behind, played by the great Betty White and Richard Dysart. There is also the town’s dam operator, played by Wayne Duvall.

Hard Rain is a guilty pleasure of mine. I know it isn’t a good movie but it is great, mindless fun for ninety minutes. The action is good, there are a lot of layers to the story and there really isn’t a dull moment. I can’t say that the script is good either but at least the plot moves swiftly, offers up some decent surprises and is interesting enough to keep one engaged.

The highlight of the film is the three male leads, all of whom played their parts well and seemed to be having fun with the material.

This is a quintessential ’90s mid-budget action picture. It doesn’t try to do too much and stays pretty grounded in reality. The premise made for an ambitious picture, especially in regards to how much water was needed to create the scenes, but it never felt over the top or ridiculous. The shootout inside the church is marvelously executed and still looks good today.

This is just a fun movie with a good cast that I have to revisit once in awhile. 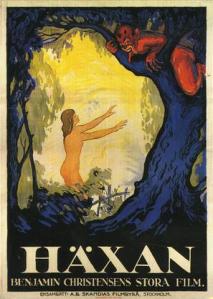 “Poor little hysterical witch! In the middle ages you were in conflict with the church. Now it is with the law.” – Title Card

Häxan is a film I saw some clips of, as a kid, and was immediately mesmerized by. I didn’t see the full version of the film until the high quality 2006 remaster came out on DVD. Most recently, I checked out the shorter 1968 English language version with the narration by William S. Burroughs.

Both versions of the film are generally the same, except that the English language version has spoken dialogue and a shorter running time due to the exclusion of some of the title cards. The 2006 remaster is superior though, if you want to see the most authentic version of the film. Plus, the music in the 1968 version is bizarre and actually distracts from the tone.

Comparing this to what was out in 1922 really puts into perspective how terrifying this film must have been. The scariest thing at the time was Nosferatu and even though it effectively builds suspense and dread, Häxan throws demons and evil in your face at just about every turn. In fact, the Satanic ceremonies in this film are still better constructed than those in almost every other film throughout history. The amount of demons in this picture is astounding and just about every evil character has its own unique look.

In a lot of ways, the film is like an over the top PSA to deter people from getting involved with witchcraft. It is to Satan what Reefer Madness was to marijuana use. Granted, this is a much better film in every way. But I imagine that the film probably had an effect opposite of what was probably intended. It plays as the most effective and coolest “Come join Satan!” propaganda that could ever be created.

Apart from the costumes themselves, the makeup and special effects were impressive and uncanny for 1922. The scene with the witches flying over the town is especially breathtaking.

While this isn’t remembered at quite the same level as Nosferatu or The Cabinet of Dr. Caligari, it deserves to be in the same conversations film aficionados and historians have had about horror pictures from that era.

Reptilicus is what happens when the Danish think that they can make their own knockoff of Godzilla. While I can’t blame them, as other countries have tried the same thing but this non-Japanese kaiju flick is on a whole nother level of sucktitude.

To start, the creature looks worse than a rubber dinosaur you’d find on the bottom shelf of a gas station for a dollar. It’s not particularly cool or scary or even threatening. It is a sort of rubbery wet dragon looking thing with a long neck, little hands and a fat body. It doesn’t look very mobile and it actually isn’t. Godzilla would probably use Reptilicus as a bean bag chair while commanding its head to slither into the kitchen to fetch some snacks.

Reptilicus also has a stupid power. He spits some sort of neon green glop which doesn’t seem to do much other than visually creating an artistic transition from scene-to-scene. So really, his power just makes the film’s editors’ lives easier.

The movie is also bogged down by the stupidity of a character named Peterson who is a goofy lumberjack looking guy who acts like that unfunny asshole Jerry Lewis. He is actually Dirch Passer who is some famous Danish comedian. Just imagine watching a Godzilla picture and all of a sudden, for no reason whatsoever, Jerry Lewis walks into a scene to be a spastic moron making funny faces.

Reptilicus is a poorly made film. It is one of the worst Godzilla knockoffs ever made and there are a ton. But at least it finally gets its just desserts being that it is featured in the first episode of the revived Mystery Science Theater 3000.

While this deserves to be run through the Cinespiria Shitometer, it isn’t as bad as the other films I’ve put through it before reviewing this one. Weirdly, I like the film for its strange flaws and hokey effects. Horrible monsters have a place in my heart for some reason. So I would categorize Reptilicus as a Type 2 stool, which is defined as “Sausage-shaped but lumpy.”