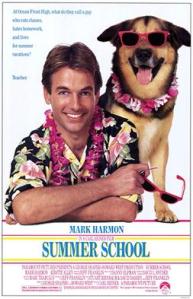 “Our next field trip has to be to the beach.” – Chainsaw, “We have to see Annamaria in a bikini. It’s very important.” – Dave

I feel like Summer School was lost in the shuffle all of all the teen comedies back when it came out. I mean, there were a ton of these type of movies in the late ’80s. I never even saw it until the early ’90s on cable but I immediately loved it.

For one, I’ve always liked Mark Harmon. He was on a few shows that my mum watched and he just always came across as a cool and likable guy. But in Summer School he’s probably even more so, especially from the perspective of a kid growing up, as he was the sort of teacher you always wanted.

Additionally, the kids in this are all pretty great and many of them went on to have pretty good careers in television and film.

The story centers around Harmon’s Freddy Shoop, a high school P.E. teacher off to Hawaii for the summer when he gets stuck having to teach summer school to a class of losers. Although, as we learn, the kids aren’t losers, they just need a different kind of approach to learning and some motivation. Over the course of the story, Shoop and the kids build a great bond and by the end, they’ve all vastly improved under his style of teaching, which irritates the snooty principal.

This film really solidified Dean Cameron as one of the best guys to play a stoner type. His best friend in this, Gary Riley, was another young actor that always made me smile when I’d see him pop up in things.

Additionally, this film really benefits from Kirstie Alley’s involvement. This is right before she rose to prominence on Cheers but this movie allowed her to exercise her solid comedic acting chops, which would go on to define her career going forward.

While I don’t think that this movie will play well for those who didn’t grow up in the ’80s or ’90s and don’t already like these sort of goofy, teen comedies, I still think it’s a better film than one might expect. In a sea of similar pictures, it’s definitely better than average and just has fun characters while being an entertaining and amusing movie about a teacher giving a crap about kids that everyone else has given up on.

“Well, you can say that the night is full of danger, but you know, to the night, you’re not a stranger. You know what I mean?” – Phoebe

Man, this was a really weird but also kind of wonderful movie.

And sure, it’s cheesy as all hell but it’s got some real heart and is somewhat endearing. It’s also really cool seeing some seriously legit musicians in this, hamming it up to the max and looking like they were enjoying every minute of making this strange and lively movie.

I don’t even know if I can really consider this a cult classic. It’s not something that anybody talks about, even in circles of film fans that would love something as bonkers as this.

Basically, this is a horror comedy but it’s also a musical full of people like Toni Basil, Thomas Dolby and Bo Diddley. It’s also very much a product of its time and while for new viewers it will certainly feel extremely dated, it’s sort of a time capsule into the weirdest shit that entertainment had to offer as the ’80s shifted into the ’90s.

The movie’s main star is Dean Cameron, who I have enjoyed since first seeing him in Summer School when I was a kid. He always sort of played stoner type characters in C-level comedy films but I always thought of him as a solid, charismatic, comedic actor that probably deserved more rolls at a more mainstream level. I think the biggest thing he was in was Men At Work but he was also somewhat overshadowed by a stacked cast in that one.

Here, Cameron gets to shine and he even gets to perform some musical numbers with the band he throws together to impress the love of his centuries long vampire life.

While the story isn’t anything great, it’s hard not to get lost in this, as all the core characters are pretty entertaining. I especially liked Thomas Dolby in this, as he essentially plays the film’s villain, a new wave British dandy that doesn’t like this vampire kid trying to lure away the girl he sees as his own.

To enjoy this film, though, one probably has to really love the entertainment of its era, as well as pure goofiness. Since I fit that profile, this is a pretty good movie for me to throw on to mindlessly escape from the real world for an hour and a half.

Rating: 5.75/10
Pairs well with: other really odd comedies of the ’80s and early ’90s, especially those with horror themes.

“There are several sacred things in this world that you don’t ever mess with. One of them happens to be another man’s fries. Now, you remember that, and you will live a long and healthy life.” – Louis

Men at Work was both directed and written by Emilio Estevez. Originally, he had planned to call it Clear Intenet and says that he came up with the idea in the mid-’80s while filming St. Elmo’s Fire. Originally, Estevez wanted it to star himself and another Brat Pack member, Judd Nelson. He also claims that John Hughes was interested in producing it. Charlie Sheen asked to be in the film after reading his brother’s script and feeling like he needed to do a comedy after a string of more serious roles. Estevez, who was busy and filming Young Guns II while editing this picture, wanted to see this pet project through.

While the critical reception was mostly negative to mixed, at the time of the film’s release, it did please fans of Estevez and Sheen and has gone on to be a cult favorite comedy of its era.

It certainly isn’t a classic or a great film but it is charming and amusing. Both brothers have charisma, they are great when together on screen and the addition of Keith David, Dean Cameron and John Getz gave this film a lot of fun characters to play with.

The plot sees two garbage men get caught up in the drama surrounding the murder of a city councilman. There is an evil capitalist type, played by Getz, who is illegally dumping chemicals into the waterways around this coastal Los Angeles suburb. The brothers, who are just friends in the film, run into a bunch of zany characters that get strung along for the ride as well. But none of them are as entertaining as Keith David, who is, let’s be honest, stupendous in everything he does. And frankly, this is one of my favortie David roles of all-time, right alongside They Live… obviously.

Yes, this is a goofy, stupid comedy but that’s its appeal. Estevez didn’t write the funniest or most engaging script but he was able to give us something that worked, was true to the actors involved and felt pretty organic.

The ’80s and ’90s had a lot of dumb buddy comedies. Some of them had cops, some of them had slackers in over their head but it was a really fun genre for a long time. Men at Work just adds to it in a good way.

Rating: 6.5/10
Pairs well with: Young Guns, as the brothers Sheen are united there too. Also, Tango & Cash, the Stakeout movies and Dragnet.