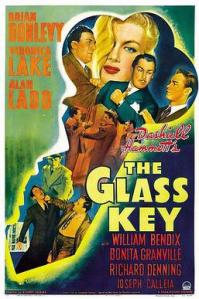 “Hey, Rusty, Little Rubber Ball is back. I told you he liked the way we bounced him around.” – Jeff

The Glass Key was film-noir before film-noir was a thing. A lot of people consider 1944 to be the year where noir took over but there were a few films that paved the way and this was one of them. Plus, it was based off of a Dashiell Hammett novel ala The Maltese Falcon.

This also pairs Veronica Lake and Alan Ladd, who worked together in seven movies, four of which were noir pictures.

For the most part, this helped set the stylistic trends of cinema for two decades. It isn’t the best noir, far from it, honestly, but it boasts pretty good cinematography, shot framing and shot motion that would become the norm.

Also, from a plot standpoint, it showcases political corruption, gangsters and a look at American life at the end of World War II. These are all tropes that would be a big part of movies well into the ’50s.

But even with all that, it doesn’t resonate with me as greatly as some of the better noirs do. I can’t deny that this was doing some solid things from a filmmaking perspective before the rest of Hollywood jumped on the bandwagon but I found the film a bit dull.

The acting was good, the film looks nice and the story had some decent curveballs thrown in but it lacked the panache and energy that would come later, as the noir style really took hold.

Rating: 6.5/10
Pairs well with: the other noir films featuring both Veronica Lake and Alan Ladd. 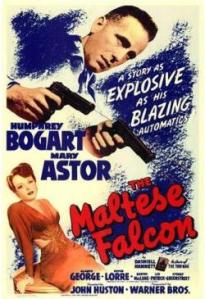 “When you’re slapped, you’ll take it and like it.” – Sam Spade

I remember seeing the poster for The Maltese Falcon in a Hardee’s fast food restaurant near my house when I was a young kid. It was on a wall that was also decorated with posters from The African Queen, Casablanca, Key Largo, The Big Sleep and The Treasure of the Sierra Madre. Whoever the franchise owner was, they must have been a big Bogart fan. Something about that Maltese Falcon poster just grabbed me though. I wouldn’t see the film until years later but I always remember eating breakfast in a dining room surrounded by Bogart’s manly mug.

As I got older, I too became a big fan of Humphrey Bogart. In fact, he is my favorite big wig actor alongside Orson Welles. The Maltese Falcon was also a film that drew me in and lived up to the hype of this poster that had a profound effect on me, as a kid just discovering his love of motion pictures.

The film features another actor I am a huge fan of, Peter Lorre. Seeing Bogart and Lorre together was a treat. While I was a fan of Lorre due to his later horror pictures, where he was often times playing opposite of Vincent Price, Boris Karloff or Basil Rathbone, seeing his work when he was younger, is still a lot of fun and he holds his own among the heavyweights.

The acting in this is some of the best put to celluloid but that is just about every Bogart picture. The guy just had an uncanny and almost magical way in which he commanded the audience’s attention and transcended the screen. With Lorre, their scenes in particular are some of the best in Bogart’s legendary career. Mary Astor, Gladys George and Sydney Greenstreet also add a certain level of quality to the picture. Elisha Cook Jr. also showed up with his best foot forward.

Most film-noir experts credit this picture for giving birth to this genre that no one realized was a genre for a few decades. It is distinctly noir in its twists and turns and its femme fatale. It uses a high contrast visual style, similar to what was seen in German Expressionist pictures of the 1920s. But there is just something pristine about this movie’s visual presentation. It has a silvery and majestic allure.

At the time of The Maltese Falcon‘s release, quality mystery films were most associated with British directors like Alfred Hitchcok and Carol Reed. This proved that Hollywood could hang with the genre and as was stated in the last paragraph, this was a film that birthed a storytelling and stylistic movement in American motion pictures.

Coming out the same year as Citizen Kane, these two films redefined how filmmaking techniques could evolve. Pictures would become more artistic and less straightforward. John Huston, like Orson Welles, gave the world something unique and new.

The Maltese Falcon is a near perfect picture. It falls short of Citizen Kane when looking at the best pictures of 1941 but in any other year, this could easily be the best film. It boasts technical prowess, dynamite acting and as cool as Bogart was, he was never as cool as he was here, as Sam Spade.