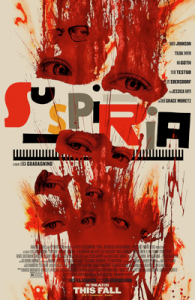 “Movement is never mute. It is a language. It’s a series of energetic shapes written in the air like words forming sentences. Like poems. Like prayers.” – Madame Blanc

There had been rumors of a Suspiria remake for years. I never thought it would actually happen, as it was in developmental hell and it isn’t a film that needs to be remade. The original was unique, haunting, effective and super stylish. In fact, it’s one of my favorite films of all-time.

So I was definitely against the idea of a remake. In fact, in my original Suspiria review, I referred to the upcoming remake as “cinematic sacrilege”. But something changed when I saw the trailer for this film.

This was a motion picture that was drastically different and certainly appeared to be its own thing only vaguely inspired by its source material. I was intrigued and once I realized that it was directed by the very talented Luca Guadangnino, who most recently did the Oscar nominated Call Me by Your Name, I was even more intrigued.

Unfortunately, this didn’t get a theatrical release near me but knowing that it was distributed by Amazon Studios, I figured I could just wait until it was available for free with my Prime membership. Once it was, I wasted no time in checking the film out.

I ended up being pleasantly surprised by this movie and even though it isn’t on the level of the original, it exceeds it in some factors.

Primarily, the acting in this picture is utterly superb and it is only enhanced by Guadangnino’s direction. He was able to capture very intimate moments, without the support of dialogue, in a way that added a mystique to the haunted proceedings.

Guadangnino also didn’t take his style cues from Argento’s original, which is actually a very, very good thing. This version of Suspiria was incredibly visual and stylized but in a new and unique way. Instead of employing the intense vivid and contrasting colors of Argento’s patented giallo visual flair, the color palate here is more subdued, full of dark earth tones and a grittiness. However, Guadangnino does sprinkle in some giallo-esque highlights. I think it is clearly an homage to Argento but it is done so subtly that someone unfamiliar with the original picture will miss it.

I thought that both Dakota Johnson and Tilda Swinton really owned their roles in this film, especially Swinton who had to play triple duty where two of her characters presented real performance challenges. Also, I was really impressed with Mia Goth and her ability to truly wear dread on her face and in her body language.

While the score by Goblin is absent, like the lack of giallo visuals, it is a good thing here. This film’s score by Thom Yorke has real character and it works quite well with the narrative and visual tones. While it is very hard to top that Goblin score, what we get with this film fits pretty flawlessly. Trying to mimic the sounds that Goblin did in 1977 would most likely have been a distraction.

This film also benefits from using the old school method for building suspense. While the picture may feel slow at parts, there really isn’t a wasted moment and everything serves the purpose of adding layers towards the story’s big climax.

As far as the climax goes, it has a pretty shocking twist that almost adds a feeling of disorientation to a sequence that almost comes across as sensory overload. It’s a lot to bear in a film that crawls by at a relaxed pace but it’s is quite incredible when you get to this point in the film.

That being said, I thought that some of the stuff in the finale was a bit over the top and a bit cheesy. I don’t want to spoil anything by pointing out the details but the whole thing hits you in the face like a hammer and by this point, you are mentally spent and the grotesque and hokier bits are buried under the weight of the whole sequence.

And despite my reservations about a few things with that finale, it is that moment that really made this film work for me. It truly showcased that Guadangnino might have started with Argento’s premise but in the end, he crafted his own creation that was much more complex but emotionally and intellectually deeper than the original. That alone allows this motion picture to justify its existence.

I look at remakes like I look at cover songs: if an artist can improve on the source material in some way or present it differently but still well, then it serves a purpose.

In the end, this is a motion picture that shocked and surprised me. While I still prefer the original, this remake is one of the absolute best horror films of the last decade. 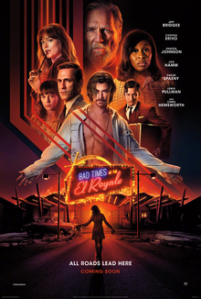 I’m glad that I went into this not knowing much about it. I saw one trailer, awhile ago, but my memory sucks because I’m getting old and I probably rival Roger Ebert in his prime for the amount of films that I watch. But I did know that this was a neo-noir, written and directed by Drew Goddard and starring a bunch of people I like.

Well, this is one of the top films I’ve seen in 2018. That being said, I’ve been to the theater less this year than any other because we had a terrible summer and even most of the indie stuff isn’t motivating me to get out there. But man, my FireStick probably deserves a break, as I’ve ran it through the wringer.

If you haven’t seen this, I don’t want to give away too much. The less you know, the better. This is the sort of film that takes you on a real journey with twists and turns and big reveals, curveballs and surprises. The real highlight though, is seeing these great talents together, playing off of each other and playing each other.

The story takes place at the El Royale, a nearly defunct hotel literally split in half by the California-Nevada border. It’s a place that used to be frequented by big wig celebrities and politicians. Now a group of strangers are staying there and their lives all become intertwined, as each brings their own baggage into the situation.

Some of the film is told in flashback to show you what led each character to the hotel. This isn’t a movie bogged down by flashbacks though, as they all happen pretty quickly and are just there to fill in some context and add some seasoning to the larger narrative.

The first act of the film actually reminded me of Clue, not that this was a comedy but you witness a bunch of strangers meet in a lobby at a place they are spending the night. Each seems to have a secret and to not be who they seem. But once the plot gets rolling, this isn’t a whodunit murder mystery, it’s more complex than that.

The one thing that really stands out about this film apart from the great story and the great acting is the cinematography. The lighting is superb and the shots are great. Being that this hotel is equally split by the state border, a lot of shots take advantage of this and showcase this symmetry or dichotomy. The California side of the lobby has the bar, the Nevada side has slot machines and each half of the room has a different color scheme. I also loved the use of fire in the climax, as it made everything feel truly Hellish.

While this isn’t a massive Hollywood blockbuster, this is something that should be seen on the big screen. So you should probably get out and see it while it is still in theaters. As of right now, this is definitely a frontrunner for my personal favorite film of the year.

Black Mass is the latest mobster biopic to come down the pipeline. What makes this one interesting is Johnny Depp wears a bunch of heavy make-up that looks odd and makes him look like the elderly love child of Ray Liotta and one of those reptilian aliens that I heard are taking over the U.S. government.

The film is directed by Scott Cooper, who also did the critically-acclaimed Crazy Heart and the mediocre Out of the Furnace. He also acted in an episode of The X-Files a long time ago. I wouldn’t say that this film brings back the bright shining star status Cooper had with his debut Crazy Heart but it isn’t a bad film by any means. It is more eventful than Out of the Furnace but unlike that film, I don’t care about any of the characters in Black Mass.

Depp’s portrayal of James “Whitey” Bulger is interesting and well executed for the material but there is a real lack of material there. There is no character building or development. What you have is a one-dimensional psycho on screen from the opening bell to the closing bell. His backstory is casually mentioned, his relationship with his friends and family is bland and he just feels like a cookie cutter bad guy in a cookie cutter mob film. I don’t care about Bulger, good or bad. I don’t sympathize with him or hate him. I should feel something, correct? And that is how it is for every character in this film.

For a movie boasting a cast of names like Depp, Benedict Cumberbatch, Kevin Bacon, Peter Sarsgaard, Joel Edgerton, Jesse Plemons, Adam Scott, Corey Stoll, Julianne Nicholson and Juno Temple – I expected more. Additionally, Rory Cochrane from Dazed and Confused and Empire Records has an integral role, as does Dakota Johnson, who I am not as familiar with but she is some sort of big deal because she was in Fifty Shades of Grey (hopefully that’s not all she’s going to be known for).

This film seems to be getting a lot of love from critics. I’m not sure why. It plays from scene-to-scene and has a logical and fairly fluid plot but there just isn’t a lot of suspense or build up. Everything is predictable. You know who is going to die and when, you know what this psycho is thinking. Realistically, shouldn’t the psycho surprise you? I know that this is a biopic but some of us don’t know the whole “Whitey” Bulger story and the film would benefit from giving us a few surprises instead of blatantly foreshadowing everything to the point of eliminating any real tension or drama in the movie.

Black Mass is more good than bad, even though I am being somewhat harsh. The thing is, it is pretty forgettable in the grand scheme of gangster movies. It is interesting enough to watch but it certainly isn’t a classic in the sense of Goodfellas, The Godfather, Scarface or even Depp’s 1997 film Donnie Brasco.